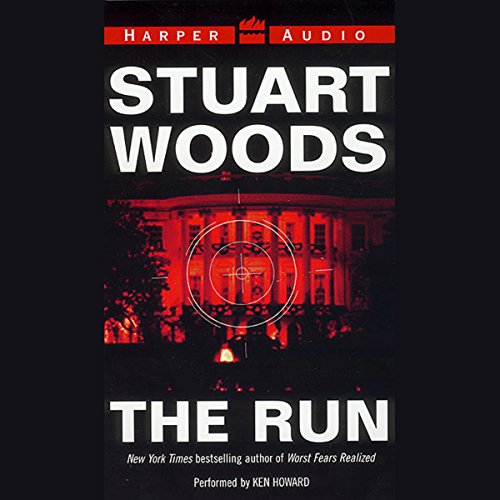 Will Lee, the hero of the acclaimed New York Times best-sellers Run Before the Wind and Grassroots, has finally established himself at the heart of American government as the respected senator from his home state of Georgia.

The road to the White House, however, will be more treacherous and deadly than Will and his wife, Kate, an associate director in the Central Intelligence Agency, can imagine. A decent, courageous, and principled man, Will soon learns he has more than one opponent with whom he must contend. Thrust into the national spotlight as never before, he becomes the target of clandestine forces from the past who will use all their money and influence to stop him dead in his tracks. Now Will isn't just running for president...he's running for his life.

Filled with all the suspense and roller-coaster plot twists that have become Stuart Wood's trademark, The Run is this master storyteller at his best.

What listeners say about The Run

Kinda predictable Stuart Woods. There is a bonus.

Stuart Woods began the saga of Will Lee in his first book, Chiefs, which is, IMHO, way better than The Run. By the time of this book Mr. Woods had been cranking these out at a really fast pace, and the relationship between quality and quantity is inverse, if I may be slightly obtuse. Mr. Woods knows how to tie the maiden to the railroad tracks, and start the train huffing down at her. He even creates a good Snively Whiplash, for those of you who remember Bullwinkle the Moose. I'll stop being obtuse. By now Senator Will Lee is in his second term as the senator from Georgia. His wife Kate is rapidly rising in the ranks of the CIA. The president falls and slips into a coma. Joe Adams, the Veep, has early Alzheimer's disease, a fact known by only a few Washington insiders. So, Will decides to announce his candidacy for the presidency. Political infighting of the highest order ensues. Senator Lee's life is endangered by a small group of right-wingnuts ensconced in your typical bomb-defense-enforced cabin in the Idaho woods. Political terrorism ensues. This kind of plot is a thing which is being cranked out by the bushels by the Nelson DeMilles and Brad Thors of the world, and fine writers they are. It sells copies. It's not bad writing. Maybe it's just that I recently read All the King's Men, by Robert Penn Warren, and this stuff, by comparison to that, is thin gruel, indeed.
The bonus, quite unexpectedly, is that the narrator of this book is not Ken Howard, but Frank Muller. This is just about the only reason I would buy a book like this. Having listened to so much of Frank's truly marvelous work, I'm afraid I am down to stems and seeds now, if you know what I mean. Frank is a little rushed here by the production people, which happens when he is forced to read sub-par writing, but even this pressure can't push his immense talent down. He makes this stuff exciting, even though we all know that the good guys will win, and the truly sleazy bad guys will lose. Why else do we read? (Wait, There must be a better reason than that.) The secret service intrudes on the lives of Will and Kate, the plot accelerates to the screeching point, and everyone, I guess, is satisfied. If this is the kind of stuff you take to the beach, go right ahead. Don't forget the hat and suntan lotion. Or maybe just fall asleep for a couple of chapters. You won't miss a thing.

I have read two and listened to two of the Will Lee series, my family lived in the area around LaGrange, Georgia and this series is a great departure from the Stone B series, I have to say on a personal note that I actually like these better. They have more developed story lines and unlike the Stone B series, the lead character isn't hopping into bed all the time. Some may find the southern story line a little slow, but Chiefs engaged me and I kept going through three other books.

I've enjoyed the entire Will Lee series and was looking forward to listening to The Run during a long trip. Unfortunately, I found Ken Howard's vocal choices so irritating as to ruin the book. His habit of ending sentences with a downward inflection and volume decreasing to a near-whisper with flattened vocal tones made the characters sound like demented serpents. I'm sure that Ken Howard is a lovely person with many credits to his name, but he lost me on this performance. I'll read the rest of The Run to find out what happens.

What did you love best about The Run?

The twists and turns of the plot.

What other book might you compare The Run to and why?

The Hour Game by David Baldacci. While The Hour Game is more complex than The Run, The Run is a fun book to listen to. It is full of excitement and unexpected twists!

When Will and Kate go to bed after loosing the election and get up the next morning........

All of Stuart Woods' books are a great escape, but the Will Lee series is Stuart Woods at his best.

Ken Howard is an excellent narrator and brings these stories alive.

Stuart Woods is an amazing writer who always delivers a twisting tale with surprises along the trail. He is one of the few writers that I can’t figure out the ending midway thru the story.

Great story, even for a non political scientist. Easy to read and kept my attention with multiple plot lines. Exciting constitutional thriller with a sickly POTUS and fore knowledge by some but not all. The plotlet with the Hollywood starlet was a little annoying; she couldn't get our hero to do a non political act and finally slept with the Georgia Governor to make it happen...that was too Stone Barrington and not up to Will Lee standards. Additionally, there are some other small errors of research. There was sufficient character development so as not to be nauseatingly long. In the end, you knew that Will Lee would be elected. Wheres' book #6?

I enjoyed the book as I have the rest in the series but it became very predictable and corny. Certainly would consider it "light" reading

I listen to audiobooks all the time. I am particularly partial to the Will Lee
family and stories. I have enjoyed following the same characters through all the books.

Good story but I almost stopped listening. Ken Howard hard to listen to. Sentence endings grinding on my nerves.

i really enjoyed this story!

will lee isa very likeable character. the story moves fast ! all the pieces fit well together and you can keep up with the characters. i recommend these books for easy listening with no gore or to much smut.