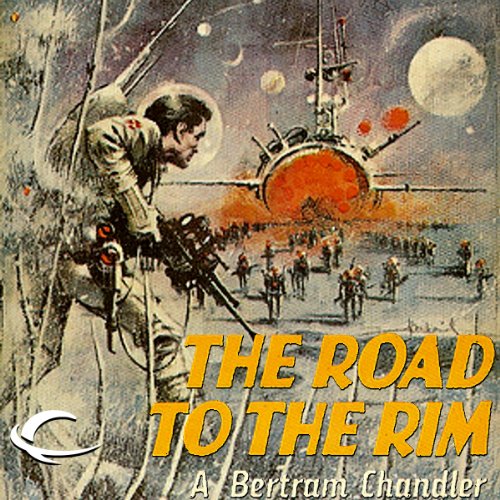 The Road to the Rim

The Road to the Rim

By: A. Bertram Chandler
Narrated by: Aaron Abano

Dragon? Fairies? Frog Princes? Sir Dominik Flandry? In a John Grimes Rim Adventure? Strange things happen out where the stellar medium grows thin, out where it is difficult to say if you remain within the galxay or you're falling through the intergalactic void. Add to that strangeness an Outsider ship filled with technology so far in advance of the human as to appear magical, and the catalytic presence of Commodore John Grimes, and anything can happen - anything at all.

What listeners say about The Road to the Rim

The start of a brillent career by newly graduate John Grimes.

What was one of the most memorable moments of The Road to the Rim?

John Grimes' flare for accidently getting into trouble begins on way to first assignment.

Where does The Road to the Rim rank among all the audiobooks you’ve listened to so far?

This is a middle of the road audio book. Good entertainment for a fan of mid-20th century science fiction space sailors. I think it's been called the Hornblower of space analogy and I agree. Fun but not earthshaking.

Would you recommend The Road to the Rim to your friends? Why or why not?

Fun but not earthshaking. Worth a listen for fans of the genre.

This book was hard to hold my attention. Not a bad story or narration, but just a fair book.
I own books 1-6 I bought them at the same time. So I guess I'll have to see how the others are. There are 12 books so far unless the story inproves 6 is all I'll listen to.

What made the experience of listening to The Road to the Rim the most enjoyable?

Good story, would have profited from a narrator who gave a damn, instead of one who was paid 50 bucks, and was angry about it.

What other book might you compare The Road to the Rim to and why?

To the Stars by L. Ron Hubbard, (Now that was a fantastic production) nice story about going out through the Galaxy.

Ah........used different voices. The title character had an English accent, the Captain had a Scottish accent, the main female was American sounding with a man's voice!

Either get a narrator who gives a damn, or spend a dime to get a good performance.