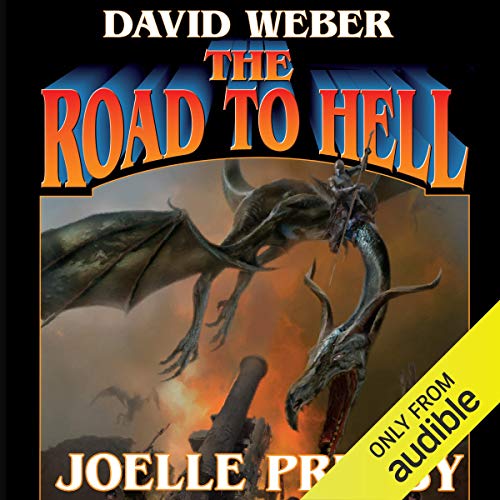 The Road to Hell

The war between magically gifted Arcana and psionically talented Sharona continues to rage. The dragon-borne Arcanan assault across five universes has been halted at Fort Salby by a desperate defense, but at atrocious cost. One of those costs was the life of Crown Prince Janaki, heir to the newly created Sharonian Empire, who went knowingly to his death in the tradition expected of the House of Calirath. And another price will be the sacrifice of his younger sister, Grand Imperial Princess Andrin, now heir of Sharona, for the accords creating the Sharonian Empire require the marriage of the heir to the Crown to wed a Uromathian prince.

Andrin bears her family's Talent, the Glimpses, which show flashes of events yet to come. She knows the accords must be secured...and, like her brother, she will pay any price, make any sacrifice for her duty to her people.

Sharona's soldiers dig in, facing the Arcanans in a tense standoff that cannot last long. Both sides continue rushing reinforcements toward the front, but how do armies fight wars when they can reach one another only through the portals that join the universes? And far, far behind the front, carried by dragons, a young Voice name Shaylar and her husband, Jathmar, hurtle deeper and deeper into Arcanan captivity, their only protection the fierce personal honor of the Andaran officer whose men massacred all of their companions in the horrendous misunderstanding that began the entire conflict.

Men and women of honor on both sides must grapple with the terrible costs and deadly secrets of the spreading cataclysm, and in the shadows, those who will balk at neither treason nor murder drive the conspiracies that pour fuel into the furnace. The stakes are high, and the pieces are in motion, but there are factors known not even to the conspirators, and not even a Calirath can Glimpse the final outcome.

What listeners say about The Road to Hell

I am ok with most of the book. But the ending?

I am ok with most of the book, but I did not like the ending. If there is not another book coming (if there is Weber's website should say so), it leaves far too much up in the air.

Poor ending to such a well thought out story...

Just as in the second book, there were several portions which could have been trimmed. Overall the story was good and rounded out the series. However there were far too many questions left unanswered. I hate to give the story three stars, but the incomplete ending leaves me no choice.

I want another book to close out the series

this series is wonderful. I always enjoy another book to wrap this out. right now I'm just hanging out wondering what is to become of the characters he brought to life.

I like David Weber but he has this bad habit of writing books that expound so much it takes forever to get anywhere. The result is a series that lasts forever and waists too much time on logistics & the emotional state of a throwaway character who is introduced in way too much detail moments before his death.

I feel like very little has happened between book 1-3 & it should have been shortened to just one novel. If he ever gets around to writing a full & complete story and finishing this series off in les then 300 novels with 40,000 pages each I will consider changing my review.

Loved it. Can't wait for more in series. Said what I wanted, why do I need to put up a large review ?

Is there another book with the ending?

A great story overall, until I realized there is no ending. I don’t think an epilogue substitutes for actually writing the end of the book. So disappointed I wish I hadn’t wasted my time!

I hope their are future books in this series. The worldbuilding and character development were excellent. The story was marvelous and supported by all the important literary devices.

Very obvious the 2nd author changed, some well set up story lines from first 2 books seemed truncated... 3rd book was a stuggle to close off story.. not very happy with it..

Best In the Series so far!

This is he third book in an incomplete series and IMO is the best yet. I hope the fourth novel arrives soon. You do need to read the first two novels for this one to make much sense as there is very little review of the back story until you are well into this novel.

keeps you guessing. my only complaint is simply that there isn't yet a next book.

oops he did it again !

i promised myself to never start a another series by David Webber, he never finishes them !!! It is so very frustrating, the story is good the plot lines are great be he clearly gets bored and just dumps the series and goes on to something else leaving the listener hanging !!!