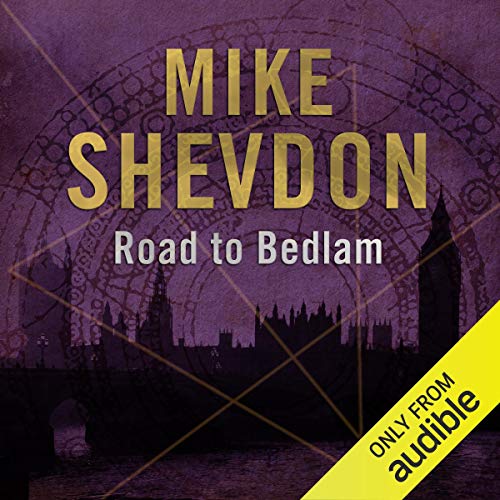 The Road to Bedlam

The Road to Bedlam

The sequel to Sixty-One Nails.

"There's been an accident. It's your daughter." But Alex isn't dead. She's been snatched because she came into her magical power early. Her father, Niall Petersen, must use his own wayward magic to track her down and save her from the madness of Bedlam.

Mike Shevdon lives in Bedfordshire, England, with his wife and son, where he pursues the various masteries of weapons, technology, and cookery. His love of Fantasy and SF started in the 70s with C S Lewis, Robert Heinlein, and Isaac Asimov, and continued through Alan Garner, Ursula Le Guin, and Barbara Hambly. More recent influences include Mike Carey, Phil Rickman, Neil Gaiman, and Robert Crais, among many others. He has studied martial arts for many years, mainly aikido and archery. Friends have sometimes remarked that his pastimes always seem to involve something sharp or pointy.

What listeners say about The Road to Bedlam

Note: In this review, I discuss the four-part series as a whole, in addition to main focus on this book. There are purposefully vague references to some of these things below, to provide examples without creating spoilers.
-
Short version: First book is decent, second is fairly good, but investment pays off as the following 2 books just get better and better. Book 2 = B. Overall series = A-. If you’re into contemporary/urban fantasy, I would definitely recommend picking this series.
-
Story (B+): If you like dynamic characters that really grow and change as the story unfolds, then this might not be the book/series for you. If you like urban fantasy that has a pretty cool story, then pick this one up. In that it centers on a normal contemporary guy who tumbles into a surreal world, it’s somewhat reminiscent of Neverwhere (by Neil Gaiman), but without quite hitting the mark. There were few times when I thought it almost got started to approach a similar level of suspense/tension/emotion/thought, but fell just a little short for some reason I can’t quite put my finger on (which is probably why I’m not a writer). Then again, I think it’s really not fair to compare other authors to Neil Gaiman (he’s just too good).
As mentioned right up front, not terribly dynamic main characters—this is primarily a plot-driven book. Fortunately it’s quite an enjoyable plot. At the same time, I’d suggest practicing a little suspension of disbelief… and maybe suspension of a bit of logic too (just a touch). There are odd little incongruities, or at least little things that could be patched up a bit better. For example: Character 3 asks “do you trust me?” Character 2 had been placing trust, headlong, in 3 for the majority of the tale at this point and has not been let down, but for some reason 2 is suddenly skeptical. So, 2 thinks “3 might have good intentions, but also has 3’s own motivations.” But there’s nothing that really changed up to this point to bring about this skepticism. As far as the villains and many secondary characters go, I found them to be perhaps the richest part of the tapestry woven by the story, and would enjoy reading again. The magic system is not terribly outlandish or especially original, but one thing that I REALLY liked was that nobody was leveling forests and towns with god-like power. When magic is employed it is generally more targeted and taxing. Characters are clearly limited in their ability to conjure by some clearly set guidelines (I won’t get into specifics, because everybody hates spoilers). There are also methods of travel and communication, which I found both entirely sensible and fantastically abstract at the same time (one of my favorite bits).
-
Audio (B): The performance was good, but not great. Good tone and pace, plenty clear, good production quality, etc. I thought it would be better to have more range, or incorporation of accents, to differentiate segments of quick conversation that didn’t explicitly specify the speaker. There are fairly long sections of dialogue would go by without a single “he said”… not good for someone with my attention span… anyway, what was I saying? Oh, yeah.. In some conversations with similar voices I got a little mixed up as to who said what.
-
The overall series (A-): The second, third, and fourth books follow on with the story. The third and early fourth (and late part of second) are the sections that get into the culmination of previously laid out plot points. That’s when things ramp up, and the whole scope increases (including some of the aforementioned magical capabilities). Basically, we get very well acquainted with the people who can really throw their metaphysical weight around. We also get to learn that some people are more capable, and/or differently motivated, than we (or anyone) had originally assumed. In the first book, I really feel like the whole story is sort of set up and the ball gets rolling a bit. The second was sort of the low point of the series, but still good. It built up characters and environment more, which was good. The next two installments are where things come together and happen in a way that made me stop questioning the value of the first book, and say ”Yeah, this was TOTALLY worth it.” The fourth is a REALLY solid resolution.

audible really helps me enjoy these books. the narrator is excellent and make it clear.

Would you try another book from Mike Shevdon and/or Nigel Carrington?

Would probably read another book, but not from this series. The first book was great, well written, well read and almost believable. Volume 2 however, gradually descended into a nonsense plot - even though the writing quality and the reader remained excellent.

Would you ever listen to anything by Mike Shevdon again?

What does Nigel Carrington bring to the story that you wouldn’t experience if you just read the book?

The first half was almost as good as book I. The plot line on the "rescue" was ridiculous in the second half.

Bedlam isn't just for the insane

Imagine you are Nial. He recently had his life completely turned upside down finding out he is Feyre/Fey/Fairie. He barely escaped with his life after being hunted by all the seven courts of the Feyre including 'The Untainted'. You think he should have earned a well deserved break, right? Our poor friend doesn't get off that easy. Nigel Carrington is the narrator and does a wonderful job distinguishing between the characters and has a lock on the dry humor and sarcasm necessary for this book.

Nial just starts getting comfortable when the other shoe drops. He's training to be a warder. He's not great but he's also not an absolute disaster. He's settling in the cottage with Blackbird and has even found a way to get to see Alex, his daughter. Then Nial and his ex-wife get notified of a tragic accident at Alex's school. Three girls are dead including his daughter. He mourns, he is heartbroken,and has become despondent, but one day for no explainable reason he searches in the mirror for his daughter more out of hopeless grief than any real belief he will find her, but he hears her...

Nial brings down a fury of weather freezing the summer day with frost for miles around the cottage in a pull for power to pursue Alex's location. He is crazed and only snaps back when he realizes he is hurting Blackbird. He has also brought attention to their hidden location not only to "The Untainted" but a human faction that would shut away and control Nial. This is what his Warder commander informs him of in a rush evacuation, but also tells Nial that this is who probably has his daughter. He forces Nial to confront the fact that the tragedy was likely caused by his daughter coming into her Feyre powers. Unfortunately, not all human/feyre that first exhibit their abilities get to do so in a safe way. What does humanity do with them? There are many psychiatric hospitals out there for the people who are crazy, can't fit in...and can be a danger to themselves and others.

This is the story of a father in search of his daughter despite safety or the common good. The Untainted, the Feyre Court, and secret government agencies all play their part. Mike Shevdon does a wonderful job. This was a joy to read. It has the right mix of dry humor and intrigue. This was the delectable treat slipped in with other reads. I highly recommend it especially to anyone who likes intrigue, mystery and the Feyre.

I loved the first book, and this started and ended brilliantly. I loved the last few chapters and It has lined up the next book excellently. The middle got a little lost for me as he investigates a plot unrelated to the main story (which I thought was going to link in, but it didn't really) - however this is definitely a recommendation book from me.

Great read for a fantasy lover.

After the first part I simply had to read the next one immediately. Nothing else would work for me.
Great book to relax, but at the same time it's not a simple fights and magic read. Although there is plenty of that in it. It has a depth to it . Touches your emotions and builds complex world to introduce vibrant inhabitants and their complicated and entangled personalities.
It takes you for a ride after which you are left craving for more .

What made the experience of listening to The Road to Bedlam the most enjoyable?

I had read the first book in the series, and could not wait to find out what happened next. The story still held my attention, but did not leave me with the feeling that MUst get the next book immediately! Perhaps next month I will return to the theme.

I think perhaps the the episode in Porton Down Research unit was a bit too violent for my taste..

What was one of the most memorable moments of The Road to Bedlam?

The above mentioned moment was the most memorable, but not for the right reason.

Could there be any truth in this?

Glad I have read it.

Found it difficult to motivate myself to listen to the end. it's a shame because the basic premise is good.