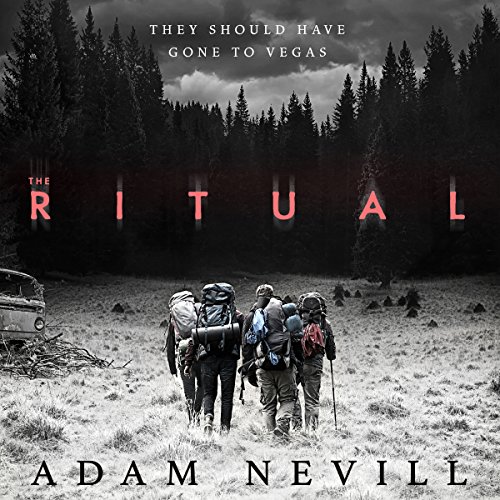 From Britain's 'master of horror', Adam Nevill, comes The Ritual, winner of the August Derleth Award and perfect for fans of Stephen King. Now a major film with Rafe Spall.

In The Ritual, four old university friends reunite for a hiking trip in the Scandinavian wilderness of the Arctic Circle. No longer young men, they have little left in common and tensions rise as they struggle to connect. Frustrated and tired, they take a shortcut that turns their hike into a nightmare that could cost them their lives.

Lost, hungry and surrounded by forest untouched for millennia, they stumble across an isolated old house. Inside, they find the macabre remains of old rites and pagan sacrifices; ancient artefacts and unidentifiable bones. A place of dark ritual and home to a bestial presence that is still present in the ancient forest, and now they're the prey.

As the four friends struggle toward salvation they discover that death doesn't come easy among these ancient trees....

Myths and Monsters and Black Metal, oh my!

This is a fun story. Very well narrated. I came for the monster and stayed for Venom; Dark Throne; Burzum; Bathory; Satyricon; Mayhem; et al

I am a big fan of the movie adaptation.
The beginning and middle were great and atmospheric. The end part was very out of place and lacklustre. The introduction of the cultists black metal group made the whole thing seem a bit hoky and comedic.
I'm glad the movie changed things as it was done a lot better

What made the experience of listening to The Ritual the most enjoyable?

The pace is good, it keeps you engaged and wanting to find out what is going to happen next.

What was one of the most memorable moments of The Ritual?

It's genuinely creepy, the first half of the book in particular. The story was unusual and interesting, the characters were engaging and you never knew quite what was going to happen until the very end.

What does David Thorpe bring to the story that you wouldn’t experience if you just read the book?

I really loved the narrator! A good narrator can make the experience of listening to an audiobook so much better.

I so wanted to like this after having received a recommendation Adam Nevill is the UK's Stephen King.

I felt the characters missed enough roundness. But most important, the author didn't play enough with the blurring between nightmare and its opposite. I wanted more ambiguity, if you see what I mean. Or maybe the opposite: blatant 'magical realism' 'a la Murakami.

Sorry: I wanted the rather inevitable ending to happen sooner than later.

On the surface, every horror cliche rears its head in this tale; protagonists lost in the woods, the lonely isolated house, ancient burial mounds and suggestions of a sinister and macabre history. From Hp Lovecraft to the Texas Chainsaw Massacre, the horror genre has always been full to the brim of stories that tread a similar path. The Ritual however, stands head and shoulders above its peers. The storytelling is impeccable and the narration both spirited and unpretentious. After half an hour I was gripped and almost breathless. Listening to this on headphones in the dead of night was a genuinely nerve shredding experience, but in the best possible way, Highly recommended!

Oh My. No stroll or camp will be the same.

From it's comencement you may think, just another story about four lads of on a jolly, get lost and bitten, or eaten or abducted.

No just a terifing story. I found myself re-tracing the story, how a bad situation can only get EVEN WORSE! No camping with the kids this summer.Or forestry walks . Poor boys etc. No more Abba or A-Ah for me

This had me scared of the dark....

I bought this audio book as it was on special offer for Halloween along with a couple of other titles. I took a punt on this one after reading some glowing reviews on Amazon and was in no way disappointed.

I stupidly started to listen to this at night, on Halloween and after an hour and a half of the story I was ridged with fear in my bed, doing everything in my power to pluck up the courage to get up and use the toilet! I eventually did and vowed not to listen to the rest of it in the dark but I had to know what happened. Over the next 48 hours devoured the rest and low and behold found myself in bed ridged with fear AGAIN unable to switch the damd Ipod off for the last hour and a half!

A perfect choice, Peter Thorpe is fast becoming one of my favourite narrators, he brings every story he reads to life brilliantly and is the perfect choice for this relentless scare fest.

This is some wonderfully creepy and intense stuff that I’d highly recommend this if you enjoy a good scare.

Not just a slasherfest, but a great horror novel

Though I agree with the previous reviewer that this book seemed at times a bit too long, I thoroughly enjoyed it. The book is in two parts, and the second part drags a bit but introduces characters and new twists that I did not see coming, at all. The character's plight is atrocious, yet there are moments of real humanity and warmth that are heart-wrenching. I had never read or heard Adam Nevill's books before and find him a truly gifted author. This is not just a slasher-fest, it has depth and meaning. The narrator does a very very good job, his voice is, at times, mesmerizing. Recommended

Getting lost in the woods with a group of friends has never been so scary. Creepy cabins, ritualistic sacrifices. A hiking trip gone badly wrong. Extremely well read and perfect to listen to in bed.

I have had this story in my library for some time now,when I first tried to listen to this story I found it so slow and nothing was happening so I gave up,then I recently went back to it and I am so glad I did it turns out to be a very good story,these four guys just out for a camping holiday and decided to take a shortcut through the woods,fatal mistake they get lost and cannot escape then the nightmare begins when the story picks up its really gripping.

Just finished Adam Nevill’s amazing The Ritual. The plot is quite thin, but that’s not a fault – it’s supposed to be about the people involved in the story. Indeed, it’s testament to Adam’s skill that he carries our interest across 400 pages in what is, essentially, a two-act tale. It’s hard to talk about what happens without giving stuff away, but I’ll try my best.

The first half of the book is a hunt – an often brutal, suspenseful trail around a deep, dark wood full of seriously weird stuff: ancient churches, broken up houses, bone pits – you name it, it’s here. This steady accumulation of unsavoury details stacks up in the reader’s mind until a menacing air of doom and terror starts building.

Then, in act two, where the focus shifts from environmental terror to a very human one, it just gets worse and worse. The first appearance of the new incoming characters sets the tone for a relentless sequence of nightmarish set-pieces the equal of any snuff-like horror movie (Texas Chainsaw, etc). And this mounts to a dreamlike conclusion in which the reader is left so disoriented that s/he is unable to decide what is real or otherwise. Very powerful.

The ending of the book – the dreamlike last few pages – contains some great writing, a fitting end to a sterling example of modern horror. I loved it. I hate effusive reviews which lack critical edge, but what can I say? Read this book.

a good read but rather samey after a while. plot tends to drag on for longer than necessary and a rather dubious ending.

I wanted a scary listen at Halloween and this audiobook certainly delivered. It is a totally absorbing story, with excellent characterisation and a slowly developing creepiness that descends into total horror. Fully recommend if you fancy a bit of a fright!

Where does The Ritual rank among all the audiobooks you’ve listened to so far?

This is a great audiobook. Some reviewers say it's a book of two halves, the first far superior to the latter. Not so, I say. The horror is split into two distinct parts, both as deliciously scary but with different emphasis. Both as good as each other.

What's not to love about a tale of four old friends reuniting for a challenging camping and hiking trip through remotest Sweden. And getting lost in the woods. That is obviously going to test their friendship, and Nevill I thought addresses those aspects well.

What a great performer. Loved his narration.

I made the mistake towards the end of the first half of the novel, listening in the dark and getting pretty spooked in the process. It's pretty terrifying at times, even for pretty hardened horror readers. Plays on that classic fear........fear of the dark and things in the dark.

Loved the end. Won't spoil it but interesting points presented to make the reader think. Overall a fantastic book.