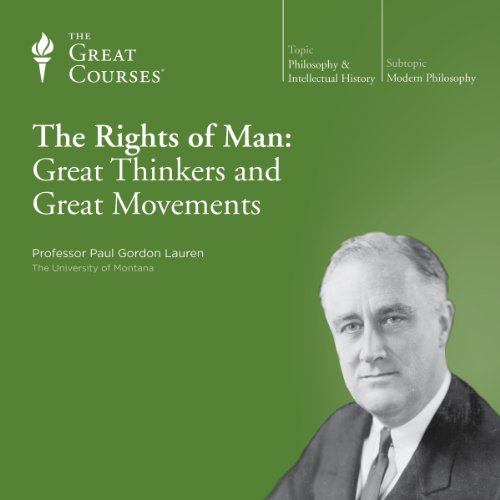 The Rights of Man: Great Thinkers and Great Movements

"We hold these truths to be self-evident, that all men are created equal, that they are endowed by their Creator with certain unalienable Rights, that among these are Life, Liberty, and the Pursuit of Happiness." These stirring words from the Declaration of Independence are a powerful statement of the importance of human rights in Western civilization. But many of the freedoms we enjoy today were not so "self-evident" to lawmakers throughout much of our history.

Instead, many of those freedoms - from racial segregation, from enslavement, from persecution for one's religion or ethnicity - were the result of long and fierce struggles that took place in courtrooms and meeting rooms, in churches and on battlefields, in classrooms and on streets, at home and abroad, often over many years.

Now an award-winning author and honored teacher and scholar tells you this inspirational and profound story in a series of 24 riveting, often moving lectures designed to strengthen your appreciation of both your rights and the long struggles to obtain them.

You'll follow the battle for human rights from the initial visions of history's greatest philosophers, religious leaders, and political thinkers to those who fought to make their visions of equality a reality, including Lucretia Mott, Martin Luther King Jr., and Nelson Mandela. Each lecture gives you an overview of historical movements like the struggle for women's suffrage, the emancipation of serfs and slaves, and the development of the United Nations' Universal Declaration of Human Rights.

What listeners say about The Rights of Man: Great Thinkers and Great Movements

Very important subjects delivered thoughtfully at the same time powerfully by the professor.
You can hear in his voice how passionate he is about the issues discussed here.

Very challenging and enlightening. I thoroughly recommend this course to anyone interested in human rights past, present and future.

The history and development of rights

This is an indispensable read. In fact you can only read this because of the efforts of the people described in its pages (or audio files).

Touching and Encouraging During Covid- 19 Time

I wish that the title would have been a bit more "up to date" (e.g. "The Rights of Humans", or the like), but Prof. Lauren is obviously a very gentle person, and I know he meant no offence. Anyway, especially chapters 8 through 24 brought tears of encouragement to my eyes several times, because the course reacquainted me with how courageous and kind and moral some people can be.

Content in this series was informative and covered topics that were new to me. I had to chuckle to myself when Professor Lauren would say, "something, something, something,.. what?" as if he expected his audience to respond with the correct answer. I kept imagining Ben Stein... "Bueller? Bueller?" Otherwise, a good performance.

great set of lectures and a really good narrator

if anything, the end illustrates the danger of letting down our guard. But a very worthwhile course by all means and you'll understand my criticism of the end, when you get there.

Well structured, presented, informative and engaging lecture series on human rights and the "rights of man". Presented by Paul Gordon Laurent, a respected writer on the history of human rights, it charts their evolution through a series of carefully chosen chapters exploring the ideas, people, and contexts in which the struggles for human rights gained momentum. This valuable text introduces listeners to the back-stories behind the need for protecting human rights as a counter to the horrors of which man is capable.

The lectures are surprisingly easy to listen to and Lauren is generous with insightful comments about context, the actors and organisations involved, and the importance and limitations of structures, documents and ideas. Every now and again he emphasises a point, drawing links to other chapters and events, or encouraging the listener to ponder his words, for a moment. He draws us into the lives and thinking of contributors to this ongoing project and does not shy away from the many challenges and limitations that remain. He emphasises the roles not only of great thinkers and leaders but of all of us, of civil society, NGOs, and the governments which frame the circumstances of our lives.

Each chapter opens the door to issues which warrant deeper reflection and analysis ... that is our task but will benefit from Lauren's excellent and comprehensive overview.

Highly recommended for anybody interested in the world and its politics, the inequities we see around us, and the challenges of promoting social justice and human rights.

Meaningful, motivating and well worth the time. Thank you Prof. Lauren

Great historical and meaningful review of where we are in the evolutionary journey of human rights.

A very easy voice to listen to, clear, concise, calmly passionate and deeply knowledgeable. Takes you through the journey of the progress of human rights up to date and hammers home the essence of the ongoing struggle which we can and should all be a part of.

I've listened to many great courses books on science, religion and philosophy but enjoyed this more than any.

Another hit from The Great Courses

I have listened to dozens of Great Courses & this ranks amongst the best of the humanities/civics lectures. The professor offers a clear, detailed and chronological series of lectures on the subject of human rights. I would recommend this course to all citizens hoping to gain a better understanding of the development of the civil liberties that many of us take for granted.