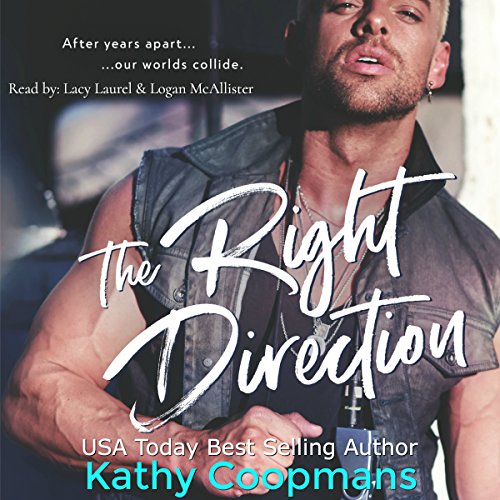 From USA Today best-selling author comes book one in The Sweet Sin Series.

All five books can be heard standalone.

Meet the men of the rock band, Trained in Black.

"Our someday will come soon, Joslyn." Those words were the last words I heard from Roman Nixon before I walked away.

I knew our someday might come, but not the one he and I had always dreamed about.

His life headed in one direction, mine in the other. While Roman became the lead singer for the successful rock band Trained in Black, I became a ruthless attorney.

He moved on and married someone else. As I was forced to observe him and his bride on the cover of every magazine out there, I deserved to suffer because of what I had done.

What I didn't expect was a phone call that led to me becoming his new attorney.

After years apart, our opposite worlds collide. This time, we may get our someday. But first, we have to find a way to steer us in the right direction.

For some reason, I had a real hard time getting into this book. I felt as though somethings just did not match up and some important things were glossed over. This story has so much potential and I think that is what helped keep me going. The characters are great and their history is amazing. The only downfall came with the timing and details. I'm not sure if I will continue this series when the next book comes out but I may consider it. I have read a few other books by Kathy Coopmans and loved them all. I look forward to reading other books by her as well.

The narration was amazing. For me, it definitely kept me reading until the end. Lacy and Logan did great!

Kathy gave us great characters. A couple separated by life that is given a second chance at love. I had a little trouble getting into the story for some reason. It was a good story, I just found myself not as immersed as I would have liked. Narration was great. I love Lacy's Male voice better than most others done by female narrators. All in all, it was a good book.

Kathy Coopmans is fast becoming one of my favorite listens. This second chance romance is gritty, emotional, a little suspenseful and all around fun. Growing up together in foster care, Joslyn and Roman have that unbreakable bond. When life circumstances kick in, they separate and even though they are apart, their hearts are always together. As life is always throwing curve balls, these two are thrown back together and their second chance is given to them, but with life threats coming at them, it is unsure how things will turn out. Coopmans has woven together just the right amount of suspense into this story, and I loved that no matter what I was concluding, the actual outcome was a surprise! The well developed characters are easy to fall in love with and their connection is hot! Roman is such the over protective male, and while his match is definitely Joslyn, she has incredible spunk. This is a great start to this new series.

Narration by this seasoned team was perfect. Logan McAllister give that growlie rockstar sound to Roman. You can feel his possessiveness as he is telling the story. Voicing Joslyn, Lacy Laurel gives this character such confidence and at the same time, you can feel her vulnerability, a task not easily portrayed in narration. It is a great listen.

Lacy Laurel is a queen and should be hailed as such.

There are good bones to this story but it has a lot of recall and twists that lost me along the way. I ended with more questions than I had in the beginning.

The main couple has really great chemistry, it’s not afraid to get dirty and there is an HEA all of which I appreciate.

If you like second chance romance with a romantic suspense element this very well may be right up your alley.

This was my first Kathy Coopmans's book. This is a second chance love story. The story is fast-paced with a little suspense. Roman is so protective and possessive, we can feel it with the narration of Logan McAllister. Joslyn is sweet, vulnerable and strong at the same time. The interpretation of Lacy Laurel's is perfect for this character. I enjoyed my listening.

Joslyn and Roman were childhood sweethearts that broke up for his career. Now they have a second chance to get it right. Roman has to fight for what he wants and against enemies from the past. This book is full of romance and drama. The narration is great and brings the story to life.

Story Review:
Rocker books are always a "proceed with caution" read for me. The majority seem to have an overload of other women drama due to the famous persona of rockers. I am happy to report you don't have that in this book. Yes, their is an ex-wife drama but the hero is so over her and only refers to her with disgust. Now THAT I can handle.

In fact, I will have to say my favorite part about this book is the fact that Roman has always loved Joslyn and they did not end because of him. When she gets pulled back into his life, he pursues her relentlessly. I can't tell you how happy that made me. I love when a Hero chases the heroine.

This had a great storyline. The ex wife is the drama of the story but like I said it was tolerable due to the feelings of the hero. We got good quality time with the main couple together and a few surprise things happen to keep the story interesting. I look forward to the next one in the book! ARC of audiobook provided by narrator.

Coopmans writes an emotional and suspenseful tale of tragedy, angst and of a love that never died. If you love a second chance romance that is super steamy, this listen is for you.

Lacy as always is super fantastic.

After years apart, their opposite worlds collide...
This time, they may get their someday...
But first, they have to find a way to steer them in the right direction...

Such a lovely and sexy and wonderful read. Great characters and nicely written.

Love Wins In The End

Jocelyn and Roman have an undeniable type of love. They have a bond that everyone should be envious of. Despite their trials and tribulations that lead them down separate paths, a wild turn of events brings them back together. I enjoyed listening to this story and visualizing the pair and what it was like to rekindle that love. Very well written and the execution from the narrators was spot on. Enjoyed their voices and bringing to life the characters. #AudiobookObsessionReviewer

The Right Direction is a second chance romance. Roman and Joslyn’s audiobook has had me stuck listening to it since the beginning. Joslyn & Roman grew up together.He’s a rockstar and now that he has her back in his life he’s never letting her go again. She’s successful lawyer and has done everything right to get what she wants.But life got in there way will they get there HEA you'll have to listen to this audiobook to find out.

Kathy gave us great characters. A couple separated by life that is given a second chance at love. I had a little trouble getting into the story for some reason. It was a good story, I just found myself not as immersed as I would have liked. Narration was great. I love Lacy's Male voice better than most others done by female narrators. All in all, it was a good book.

Roman and Joslyn became best friends over their painful childhoods and that friendship evolved into love. Joslyn supported Roman’s dream of becoming a musician even though she wanted him with her she wanted him to be happy more. Just when they had found a way to be together tragedy struck and they weren’t able to handle it together, so they went their separate ways.

Years later Roman is a successful Rockstar however the same can’t be said for his personal life. He is going through a bitter and very public divorce and it is Joslyn who comes to his rescue when he gets in trouble with the authorities.

When they reunite the connection and chemistry between them is stronger than ever, but someone isn’t happy that they are together and will stop at nothing to keep them apart.

A little suspense, hot chemistry and a love that is too strong to be denied all combine into a great start to a new series that leaves us wanting Dean’s story.

This rock star book is a breath of fresh air. It’s not just on the band touring and getting groupies. Good strong characters, action packed storyline. Looking forward to the next book. Lacy and Logan sound great together.