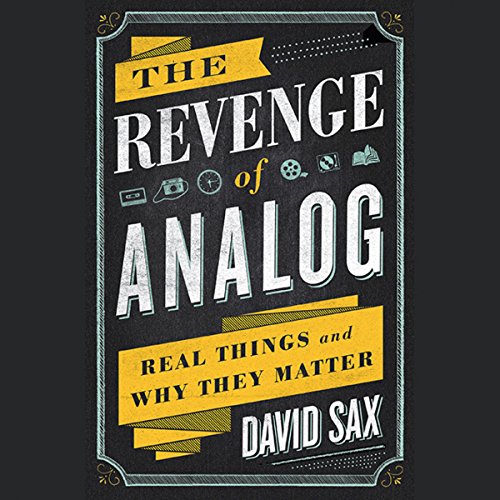 The Revenge of Analog

Real Things and Why They Matter
By: David Sax
Narrated by: David Sax
Length: 9 hrs and 17 mins
Categories: Business, Commerce & Economy
5.0 out of 5 stars 5.0 (4 ratings)

The Revenge of Analog

A funny thing has happened on our way to the digital utopia: we find ourselves increasingly missing reality.

In this spirited audiobook, David Sax has found story after story of entrepreneurs, artisans, and creators who make real money by selling real things. And they're not just local craftspeople, either. As paper is supposedly vanishing, Moleskine notebooks - a company founded in 1997, the same year as the dot-com boom - has grown into a large multinational corporation. As music supposedly migrates to the cloud, vinyl record sales were up over 50 percent in 2015 and generated almost $350 million in sales. And as retail was supposedly hitting bottom, star Silicon Valley companies like Apple and Amazon are investing in brick-and-mortar stores.

Sax's work reveals not just an underreported trend in business but a more fundamental truth about how humans shop, interact, and even think. He captures what you're missing when you can't find a good song in a vast iTunes library or can't recall the details of an eBook you read; any simulation of a sight or smell or activity you experience in the real world is just that - a simulation. As you listen to this enlightening audiobook, that seemingly simple observation gathers ever more weight.

The success stories in this audiobook are eye opening, even inspiring. You'll come away from this audiobook with a renewed sense of what it means to work, live, and shop. For anyone who has grown weary of overnight billionaires and social media market disruptors, it is proof positive that there's another side of the story.

What listeners say about The Revenge of Analog

This book says things that I had suspected but never articulated. The best things that I like, mechanical watches, LP records (even CD's), film cameras (I never threw mine away), stick shifts, and writing notes in lectures, are now explained by one who has actually thought about, studied and researched, so that now I do not feel countercultural, but rather an archetype of all humanity who can enjoy the analog world and its attractions without fear of being anachronisms.

Interesting story. Well researched and thought provoking. The best thing is that it is read by the author and the author has a great reading voice. I could listen to this guy read a phone book and I would be enthralled. That would be an analog example, a phone book.

I enjoyed this book’s content, especially its case studies. However the audiobook suffers greatly from many poorly produced edits that don’t match the main recording sonically or in level, and sometimes are edited sloppily so words are repeated before and after edits. This is very distracting and disappointing. Additionally the entire audiobook is mastered to a very low level, requiring the headphones, speaker, or car you’re listening on to be turned nearly or all the way up.

An excellent and thoughtful creation

Though I confess I just completed "The Revenge of Analog" as an audio book, I truly believe that consuming it has made me more mindful of the balance between digital technologies and analog pursuits. As someone who has been influenced by the Reboot organization, and a participant in the unplugging culture, I highly recommend this book. I must admit that as a senior executive in a technology company, I've raised more than a few eyebrows when I tell people what audiobook I am listening to. I'm buying the book, and plan to prominently display it on my desk.

I've worked in tech my whole career. The chapters on ed tech and mediation will help me inform my colleagues. Overall, it provided conversation fodder and personal reflection. Thanks!

This book articulates everything you've been thinking for the past 25 years -- give us back the real because we are tired of the fake. David Sax reads his own book with conviction here and his premise is compelling. Give this a listen.

Good, could have been better.

I've enjoyed the first two chapters, after that the book took a little bit of a boring narrative of story gathering of companies and people. The writer pulled it back together in the last chapter specially when talking about the set back of several digital projects in education technology. The Audio was the worst thing in this audio book experience, I had to shove the puds deep into my ears to be able to hear the narrator once I was using the bus or in public places. In several places the editing and changes were very obvious and very annoying.

Wait. Yes I’m an idiot. But just reviewing credits at end of audible book and realized that author and narrator are one in same. Making the whole experience even more of a resounding pleasure. Thank you!

Thank you Dàvid Sax. I have bought a white board, a moleskin and I will put my phone down more often.

First off , great listen. To be true to the book it may be best to read. But if you are like me the only time I have is to listen during a commute. Unfortunately the production of this book made it annoying. Words seem to be being clipped for compression purposes. I made it through but have higher standards for Audible to catch things like this.