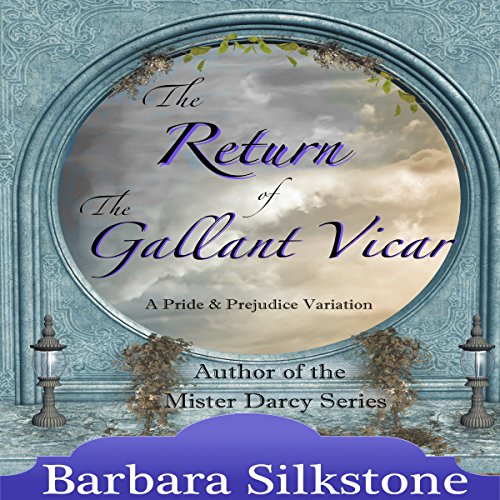 By: Barbara Silkstone, A Lady
Narrated by: Jannie Meisberger

Thank you for the warm reception given to The Gallant Vicar, my first sojourn into writing a Regency adventure. Because so many of you were kind enough to email me with your encouraging comments, I have decided to allow the gallant vicar to return. I promise his reappearance was not planned, it just happened. I hope you find The Return of the Gallant Vicar an exciting sequel to the first Gallant Vicar. You really should listen to the first book in order to enjoy the sequel. And because I delight in creating strong heroines and fast action, Elizabeth Bennet, while true to the original Jane Austen character, is a force to deal with in this sequel - so hang on to your bonnets!

Elizabeth Bennet considers the handsome new vicar at Hunsford parsonage to be everything Fitzwilliam Darcy is not. The Reverend Francis Martel is warm, accessible, and has no difficulty showing his feelings for her. Within weeks of rejecting Darcy's offer, Elizabeth finds herself swept up in a tumult of emotions for the vicar. He shares her wit, her caring for others, and the simple life - so she accepts the vicar's proposal. Will Darcy recover from his injured ego in time to intervene in their marriage? And how will he separate the couple - only days before their wedding?

Who is the Gallant Vicar, why did he disappear, and why has he returned on the day Elizabeth is to marry Darcy? Can his passion for Elizabeth be driving him or does he hold some darker secret? Will Darcy bring the blackguard down?

Barbara Silkstone is the author of the best-selling Mister Darcy series of comedic mysteries. The Gallant Vicar is her first Regency novel featuring Darcy and Elizabeth. It is not intended to be a comedy, but quirky things do occur.

What listeners say about The Return of the Gallant Vicar

A nice tale on it's own merit

A very nice little story narrated expertly. I missed the rolicking humor which I have come to associate with Ms Silkstone. The heroine has brains and nerve, the hero is honorable, the villain is despicable, and the supporting characters do make this an interesting read regardless of Pride and Prejudice.
"This audiobook was provided by the author, narrator, or publisher at no cost in exchange for an unbiased review courtesy of Audiobook Blast."

The Gallant Vicar is back, and he's up to no good! On the day of Lizzy and Darcy's wedding, a simple stroll in the woods leads to a missing bride, a race on horseback, a hostage situation, and espionage.

This was a sweet follow up to The Gallant Vicar, and ties things up nicely. It's best read after the first book. The author writes with a sly humor that had me laughing out loud. This book is more action-y than romance-y, as Lizzy and Darcy spent a lot of the book apart, but worth the time to listen. The narration was well done, as always, and pulled me right into the story. I requested a copy of the audiobook, and I'm voluntarily leaving a review.

I am glad for this second book because it tied everything up from book 1 nicely, but you do need to listen to them both. It did seem as though the personality of the Gallant changed quite a bit, but it was necessary for the story.

The Gallant Vicar, Martel, kidnaps Lizzy on her wedding day in order to find a book. (Martel is one of the worst villains I have ever come across.) A notorious highwayman is his accomplice. Of course, Darcy must search for his bride, following a few clues she leaves in the forested area of Longbourn. Mary, Lady Catherine deBurgh, and others become involved in this angst ridden, sometimes humorous, conclusion to The Gallant Vicar. The narrator, Jannie Meisberger, did a wonderful job ass each character's voice is distinctive and is consistent between both books. This story is a must for any JAFF reader. I hated turning off the story and wished my commute would have been as long as the story.

I received the audiobook, from the author, in exchange for my honest review.

What did you love best about The Return of the Gallant Vicar?

I always love a good love story no matter the story line and this was a that with a bit of mystery added in.

What other book might you compare The Return of the Gallant Vicar to and why?

Two authors come to mind that write in the Regency era that I have read, Julia Quinn and Karen Ranney. All contain mystery, suspense and good love stories.

She did a very good job with making all the characters come to life, like I was watching a move. She has a very natural, smooth voice.

No it did not but very rarely do books make me cry or laugh. That is nothing against the author because I enjoyed the story very much, although it was very short, not enough time to invest in the characters. From the writing I could tell that this was a part of a series of which I had not read before.

Fun for Lovers of Pride and Prejudice

This audiobook was provided by the author at no cost in exchange for an unbiased review, connection courtesy of AudiobookBlast dot com. My thanks to them for sharing this work.

This is a fine extension of the Jane Austen/Elizabeth Bennett genre. The characters are true to the Austen tradition and the tale paced very much as Austen's were. The story was fine, but the action was fairly slow for audio, which can sometimes drag a bit anyway. This is the sequel to a book I have not read so I might have missed some references; however the tale was complete in and of itself with narrative giving enough of the previous action that I was not wondering how we got to this point.

Jannie Meisberger's voice went well with the narration and was well-pitched for Elizabeth, who provides the primary point of view for the tale. For my personal taste, the narration was also a bit slow-paced, but that is not out of keeping with the Austen theme of life in a more leisurely time.

Overall I enjoyed the story. I am unlikely to listen to it again but would recommend it for the many Austen fans out there!

Cunning and Love Conquer All

I have so enjoyed this follow up book about the Gallant Vicar in which we find out exactly why he was brought into the story, what he was really like and the problems he created for others around him.
Cunning and love conquers all.
A nicely written story by Barbara Silkstone and a well narrated tale by Jannie Meisberger.
I will repeat what I said about the first book: "I would recommend this book or the audiobook quite happily. It was most enjoyable."
This audiobook was provided by the author, narrator, or publisher at no cost in exchange for an unbiased review courtesy of AudiobookBlast dot com.

"This audiobook was provided by the author, narrator, or publisher at no cost in exchange for an unbiased review courtesy of Audiobook Blast."


This story picks up where "The Gallant Vicar," left off. Elizabeth and Darcy's wedding day approach's, as the former Galnt Vicor returns for

something he left behind. Everyone works together to thwart him, or die trying. We keep watching, hoping to see if they make it to their wedding.


The narration was well done. The characters were excellently portrayed.