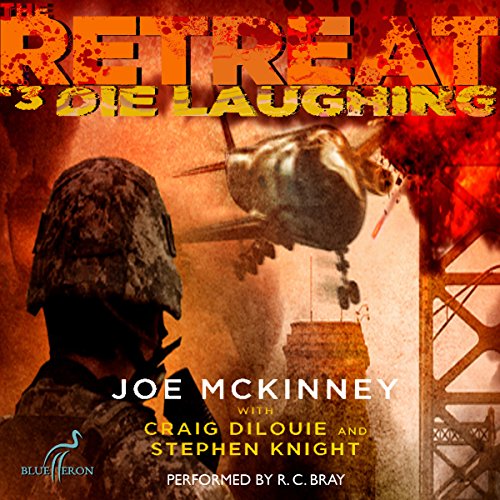 The long flight out of Boston.

After weeks of non-stop fighting across an America overrun by fearless, shrieking, mad killers, and a daring assault to retake their unit’s home base of Fort Drum, Lt. Colonel Harry Lee and the men of the First Battalion, 55th Infantry Regiment have made it to the outskirts of Philadelphia.

The blood of the innocent.

Along the way, they’ve picked up thousands of refugees, innocents in need of protection against impossible odds.

Shelter from the storm.

The City of Brotherly Love is currently under the protection of General Anthony Bell, commander of the famed 56th Stryker Brigade, the Independence Brigade. But in a world gone mad, nothing is as it seems. And when Bell has Lee arrested and put up on charges, it’s up to Lee’s right-hand man, Major Chris Walker, to pick up the pieces.

Can he snatch Lee from the hangman’s noose, and can he guide his troops and his civilian charges through the gathering horde of maniacal killers?

Or will they all die laughing?

What listeners say about The Retreat #3

Great story but way to short ! Can't wait to get the next one.
Dr A

Book 3 & now I got to buy book 4!!!!
and then I'm going to get towards the end of the series & catch up with where the authors at. now I don't dare look to see if the series has been completed. but I dread getting to the end and having more books yet to be written. because that means I have to sit there and wait for the author and his imaginative mind to finish the work faster! LOL I hope others are enjoying the book as much as I am.