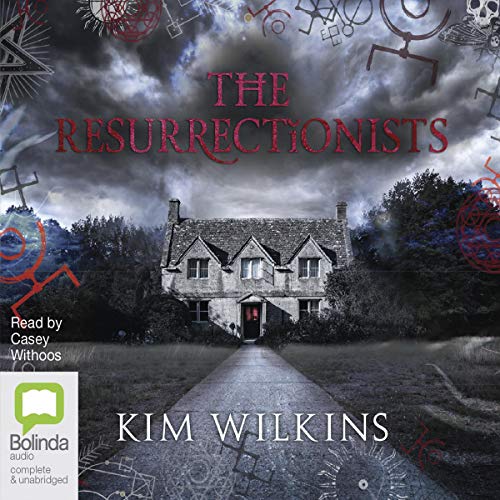 A terrifying Faustian story about eternal life and its terrible cost.

On the wild Yorkshire coast, Maisie hopes to uncover the secret of the long-running feud between her mother and her recently deceased grandmother, Sybill. But the locals in the tiny village of Solgreve are hardly welcoming. It seems the only person interested in talking to her is the dark-eyed gypsy Sacha.

In one of Sybill’s old trunks Maisie finds a diary written by a young woman in the 18th century. Georgette eloped with her poet lover from London to Solgreve – and entered a Gothic world of grave robbing and diabolical science.

Then Maisie starts seeing a figure that exudes unearthly evil outside her tiny cottage. Gradually she uncovers the terrifying secrets of Solgreve, secrets that contain an evil that threatens to claim her....

"The new queen of of the dark side." (Freda Warrington, author of A Taste of Blood Wine)

"Move over Poppy Z. Brite – Australia has its own madam of horror. Wilkins has produced a book that will make your skin scrawl and your hair stand on end." (The Herald Sun)

What listeners say about The Resurrectionists

The positive things I have to say about this book are many, but I'll just name a few highlights here. Kim Wilkins' style is incredibly competent. She has this great way with pacing, and her characters always feel so realistic that all the paranormal and complicated situations they find themselves in feel much more believable than they might from another author. And the story -- it's really something. The way it moves back and forth between the reading of an ancient diary and the main character's path of finding out who she is and what happened to her grandmother...just very mysterious, interesting, exciting, and enthralling.

But after the story was over, I had to ask myself what the overall point of it was. But that's because it didn't end in the usual way of fantasy or romance novels. The main character didn't get what she wanted in the end, which I think will leave a lot of readers feeling dissatisfied. Thing is though, it seems like we're supposed to understand that she got what she *needed* instead, which really isn't unusual at all. It's just that what she needed was to get absolutely nothing that she wanted in the beginning other than a very short break from her real life, where she had little independence and no idea what path she wanted to take into adulthood.

It felt like, because the main character was this affluent person with all the privilege she could want, she was supposed to learn that she should just be satisfied with what she has because she could lose it. Besides, she's youthfully naive and makes poor decisions anyway and is a bit too noncommittal in general. SO she should accept having her family and husband make her decisions for her. And hey, in the end, she gets the 'freedom' to decide what kind of career she wants for herself, so...happy ending!?

What IS the theme here? What's the author's point?

Am I to understand that she isn't going to be satisfied with anything no matter what she ends up doing because she's 'spoiled'? Or is it a cautionary tale about how leaving a life of privilege behind to chase down your passions can end horribly and in destitution? Not sure. Be happy with what you've got? The grass is always greener? Things could be worse? A boring life with lots of money is better than an exciting life with just enough money? Making poor decisions in your youth can destroy your future? Who knows, though none of these themes renders the ending terribly enlightening or elating, especially for a character who has just experienced the supernatural.

I can't help but wonder if the author was punishing the main character for 'having it all'.

This is an enthralling story well-told by a very smart author, but the ending left me deflated and I'm not sure what the thematic point was supposed to be. And also, all the unanswered questions left by the theme detracted from the supernatural action scenes toward the end, making them feel somehow unimportant. The main character didn't really change, either. Not emotionally, at least. She didn't really mature. She didn't become less shallow. None of that. She just learned to accept the very life she wanted to escape after losing the option to have a more exciting one.

keeps you on the edge.

the story was really enthralling and well done but I was very disappointed in the ending. Anti climactic. left me dissatisfied.

As another reviewer mentioned - are pages missing from the end of the book? How can you just leave the reader hanging in such a manner?

Interesting read for me

Loved this story easy listening if a bit predictable, however the ending was bizarre, did the author run out of steam or are there sequels?

very bridget jones but with a touch of magic

loved it, wish she had stayed with sasha though. great listen would definitely recommend fantastic imagination