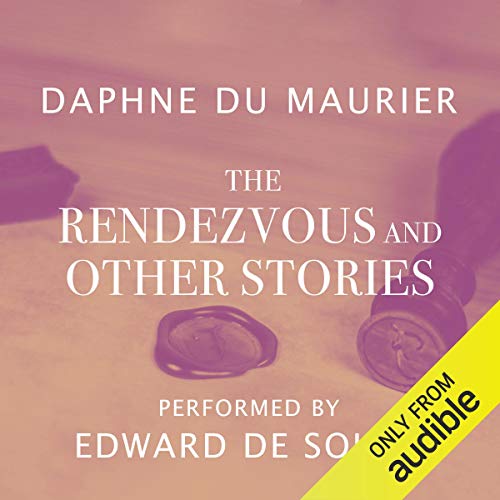 The Rendezvous and Other Stories

Each story in The Rendezvous and Other Stories by Daphne du Maurier explores a different human emotion. Narrated by Edward de Souza, this Audible Exclusive has something that will appeal to any mood.

‘No Motive’ - in which a woman who is happily married decides to take her own life; ‘Panic’ - in which a man and a woman take an illicit trip to Paris, where disaster ensues; ‘The Supreme Artist’ - in which, after his performance, an actor is greeted by a strange woman at the stage door; ‘Adieu Sagesse’ - in which two men make a plan to escape their tedious lives; ‘Fairy Tale’ - the story of a gambling man and his wife; ‘The Rendezvous’ - in which a novelist experiences disappointment when his romantic adventure doesn’t go to plan; ‘La Sainte-Vierge’ - in which a wife prays for her fisherman husband’s safety while he’s at sea; ‘Leading Lady’ - in which an actress uses her skills in order to control the men around her; ‘Escort’ - in which a World War II merchant ship sales across the North Sea with mysterious cargo; ‘The Lover ‘- in which, using his romantic expertise, a man exploits women for their money; ‘The Closing Door’ - in which, after being told he has a terminal illness, a young man must come to terms with its devastating effects; ‘Indiscretion’ - a lesson in thinking before you speak; ‘Angels and Archangels’ - a tale of religion and hypocrisy; and ‘Split Second’ - in which a woman goes out for a walk, but when she returns home everything is different.

Daphne du Maurier (1907-1989) was a British writer whose work is still greatly appreciated to this day. Her novel Rebecca is probably her most famous piece of literature, but she also had substantial success with her short stories. Her popularity and prowess are evident by the fact that Alfred Hitchcock chose to adapt both Rebecca - which won 2 Oscars - as well as her short story ‘The Birds’ into feature films.

A graduate of RADA (Royal Academy of Dramatic Arts), Edward de Souza has been acting for over 60 years. His first role was in the TV mini-series adaptation of Charles Dickins’ novel, A Tale of Two Cities in 1957, but in more recent years he has appeared alongside Jeremy Irons in The Borgias, and also in the British TV soap opera, Coronation Street.

What listeners say about The Rendezvous and Other Stories

If you've not read any du Maurier short stories, what a treat this collection is!

Each story is a brilliant gem, showing du Maurier to be a master of this difficult form of writing. She is able to fully illuminate character and provide an engaging story question with immediacy and interest.

Some stories are heart-breaking, some darkly comic. At times the innocent suffer, at others the arrogant are brought down. Each one improves upon acquaintance, revealing more with each listen.

As if that were not enough, Edward de Souza's narration is pitch-perfect. He has the range, sophistication, and emotion to portray each character accurately.

If you love a well-turned phrase and a twist in your tales, give this collection a listen. You're sure to be rewarded time and again.

Wrap it up Please!

I'm a fan of Daphne's novels, but felt left hanging and frustrated with the vague and inconclusive endings of these short stories. Perhaps it's just a literary style that doesn't appeal to me since the ratings were high for this book. Sadness...

Where does The Rendezvous and Other Stories rank among all the audiobooks you’ve listened to so far?

Without a doubt this is the best audiobook I have bought so far.

What other book might you compare The Rendezvous and Other Stories to and why?

Mabey the stories of the standard of Guy de Maupassant and some of the adult short stories of Roald Dahl.

What does Edward De Souza bring to the story that you wouldn’t experience if you just read the book?

Who was the most memorable character of The Rendezvous and Other Stories and why?

Mary Fallon in No motive, a devasting story that is clever,gripping and wonderfully descriptive and emotive.

I will listen to these stories again, many times, over the next few years. They are the epitome of what a good short story is all about.

Lost for words..."the best production I have ever listened to"

This was an absolutely amazing performance by Edward DeSousa. One of the most brilliant audible stories yet.....I cannot believe that all the different voices, accents and styles were from one performer.

So much so that it led me to research the background of the narrator and, in fact his background is in Hull and I loved his ?Hull accent in one of the marine stories which contrasts significantly with the "well to do"accents that often prevail in this genre.

Daphne du Maurier is at her very best in the short stories they just blew me away, each and every story made me stand back at the end and take at least 10 minutes to digest!

A great listen for when you're busy doing other things, driving, decorating dog walking even trying to get to sleep!
But I advise you may become sidetracked and thoughtful and not get the decorating done as quick as you had planned... Well, that's my excuse...
Enjoy

Didn't realise what a master of the short story Daphne du Maurier was until I listened to these. Great stories, very varied, nicely read, and many feel very contemporary. Highly recommended.

Would you listen to The Rendezvous and Other Stories again? Why?

Would definitely listen again to pick up the subtleties of the stories.

What was one of the most memorable moments of The Rendezvous and Other Stories?

The ending of most!

I most enjoyed The Lover.

Neither laughed nor cried but was totally engrossed.

I have been a fan of du Maurier nearly eight years after reading My Cousin Rachel and Rebecca (in that order) in school. After that I aaa hooked and tried to looking out anything I could by her. And then I came across these. A story collection I knew little about and couldn’t find in book form. I gave them a listen and I was not disappointed at all. These are classics du Maurier, but they are not as intense in their supernatural/darkness as the other short stories like “The Blue Lenses” or “The Birds” or “Don’t Look Now”, but they still manage to be amazing short stories of a great variety and they make you very uncomfortable in places as you read/listen. My favourite had to be “No Motive” and the titular story “The Rendezvous”. Definitely recommend to any fan of Daphne du Maurier

I really enjoyed these short stories, as engaging as those of Somerset Maugham . Yes, they are dated but why should that be a sin? The narrator is one of the best on Audible. He brought all the stories to life and provided me with many happy hours. Recommended to all who enjoy a nostalgic period of listening in between other genres (I love thrillers as well!).

Amazing gift of drawing you in hook line and sinker the only thing we have to pay in order to enjoy the story telling is the fact that you have to make up your own endings ... I thought maybe she might finish these nicely off with a little twist of an ending ?? But no.. then they would be perfect .. she doesn’t think it’s her job as a writer to do so ...but that’s the enjoyment in my opinion of being drawn in so that you are led to a destination .. not being left high and dry ...... but she’s so good I have to forgo any hope of a great finale otherwise I miss out completely... the stories are too good ... so we carry on listening to each one in hope that she might just slip up..... I’ve always wanted to know where those darn birds came from..... who killed cousin Rachel ???...... now to add to these mysteries we have more cliff hangers in miniature form.... delicious mouthfuls of dainties without every being able to swallow them down ..... annoying but irresistible... a case of a little is better than nothing .....

So thought provoking and easy to listen to. I too thought the narrator really added something to this book. Highly recommended.

I was looking for some short stories and read the reviews of Daphne Du Maurier books. The reviews were spot on. The stories varied in length and subject. I did not realise that Daphne du Maurier wrote on such a wide variety of topics but then I remembered that she had written The Birds which was a short story which became a full length film. Edward De Souza is a wonderful narrator with a huge range of voices and characterisations. This Audible book has been one of the most enjoyable ones that I have bought. Thank you Audible.

I could listen over and over. Great stories, and great writing, and great narration. Outstanding.