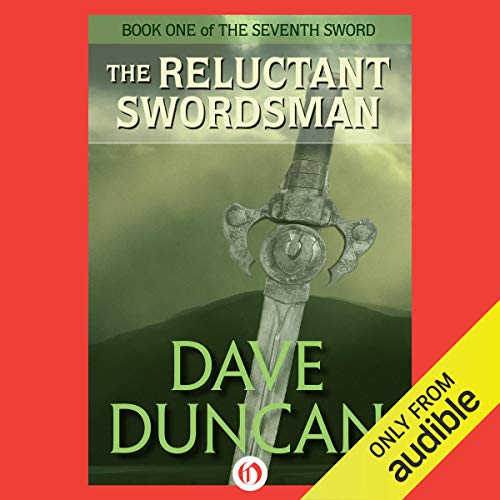 Wallie Smith can feel the pain. He goes to the hospital, remembers the doctors and the commotion, but when he wakes up it all seems like a dream. However, if that was a dream how do you explain waking up in another body and in another world? Little Wallie finds himself in the physique of a barbarian swordsman, accompanied by both an eccentric priest babbling about the Goddess and a voluptuous slave girl. Is this a rude awakening or a dream come true?

What in the world will Wallie do now that he's found himself stranded in a strange realm? Well it just so happens that the Goddess is in need of a swordsman. It won't be easy but if he succeeds he will have everything he wants. If he doesn't, things could get ugly.

Wallie is reluctant but sees his chance. If only he had the faintest clue as to the adventure he is about to unleash! If only he could imagine the forces that will be out to vanquish him!

The plot was straight-forward, easy to follow, and was enjoyable to listen to.

If you are looking for an enjoyable story, you might like this one. It is not full of intrigue, or complicated, or full of politics. It is a simply story, simply told. Having said that, I would say that I enjoyed listening, both to this book, and to the following two books in the series. The story isn't complicated; It doesn't arrive at the end you would think it will come to from the beginning, but the ending was not terrible either. All in all, I enjoyed listening to it.

Before you decide, though, please find out what other reviewers think. All things aren't for everyone. I always like recommending that the reader considers other reviews before deciding.

13 of 13 people found this review helpful

I strongly suspect that this is a rewrite of some ancient Incan story, mixed with the book of jobe,with a pinch of fantasy soul translocation. Well written and a whole lot of fun. I have to get up tomorrow at 5.30am, it is now 11pm and I am downloading the next book. Don't you just hate those sort of authors. Elol

11 of 12 people found this review helpful

This is the first book in a series that takes you through a world of swords and sorcerers that is well thought out, with characters that grow on you. Overall, I enjoyed the story, but felt the pace moved a bit slow.

Without giving away any spoilers, by the start of the second book I was seeing some obvious plot points that took the characters in the story the entire volume to recognize as important. I am not sure I have the patience to wade through the third volume to see how it all ends.

Donald Corren does a great job with the narration.

If you are a fan of the "swords and sorcerers" genera, you will probably enjoy this series of books.

Good Idea That Leaves A Lot To Be Desired

I thought that the basic idea for the story was a good one and fairly original. I just felt that there was a lot more that could be done with that idea. I'll not put any spoilers in here, but I have to say that with Wally's old memories and talents, he should have figured things out much faster. I'm speaking of the entire series here, but even in the first book there weree things a person from our world should have been able to sort out on their own. In the second boook, I figured out what was going on and I don't even have the chemical background that Wally does. There seemed to be some plot holes that Duncan could have filled in with a little more thought and effort.

Was The Reluctant Swordsman worth the listening time?

I think so. Despite it's flaws it is still a good story. It is fun and fresh and exciting. If you have a credit you're looking o burn, go ahead and pick it up.

Mediocre book depending on taste

I say its mediocre depending on taste because I tend to lean toward more graphic novels with gritty characters. This book has a character with scruples & that plays a part in the overall book. I don't think I will end up reading the other 3 books after this because I'm in the Cornwell, Martin, Ambercrombie type of violence & character depiction. I will give KUDOS to the author writing a enjoyable book while avoiding mass violence (considering everyone is running around with swords) & the language is not vulgar at all... from a literary standpoint Duncan didn't need to add any of that extra descriptions to make the book better, although I think that most books that take place during the time when archaic weapons were used (swords, axes, etc....) should be relatively graphic is coarse because before the invention of guns, pulling a trigger is much different than taking a battle axe to someones head or a sword causing real life problems during large battles... like bodies & blood lol

The book was not bad, not necessarily in my category of more than medicore but like I said before, it could be great for those readers who appreciate the ability to write an interesting story without needing to use the 'extra's' I mentioned above

8 of 9 people found this review helpful

OK, but it could be better

Would you try another book from Dave Duncan and/or Donald Corren?

What could Dave Duncan have done to make this a more enjoyable book for you?

Actually have the adventure begin. The whole first book is the action I would expect in the first act of any adventure book. The whole thing was all about the hero preparing to leave and ended with him finally leaving.

Only if they combined it with the other books inn the series.

I enjoyed this entire series

Superb narration. This is a fun series, told in 3rd person, with 4 books total. I usually avoid stories with time-portals and/or world-jumping, but the author fit that trope so neatly into the plot that it is often almost unnoticeable.

The books are classified as fantasy, but I'd called it off-world fiction or fantasy-light. There are no elves, giants, dwarves, etc. Just humans, and odd animals, like the camel-dog-horse. And a river that has no source apparently, and appears to loop around, reconfiguring itself like Chutes and Ladders.

This series is set on another planet, called simply "The World" — a place the goddess watches over. Her people are stuck in the medieval Age of Legends, without writing. Stuck in the age of sagas and sutras and storytellers, where mankind makes the most of speech through minstrels and heralds, and where a good memory is a huge advantage.

The goddess, who is the River, transplants the soul and memories of Wallie Smith, a dying young petrochemical engineer on Earth, into the body of the dying Lord Shonsu, master swordsman here on The River. She gives Wallie a task to accomplish, encapsulated in a riddle he must unravel. It's a difficult task, but he's not alone, as the goddess sends him six helpers. Wonderful cast of characters! Together, they must interpret the vague riddle and accomplish the mission.

Fun series. I was constantly guessing the riddle, too. Surprising twists.

Will Leave You Wanting

I read the reviews on this book and I got a good feeling for the series. I am always reluctant to speak against some of the reviewers I follow. After all I follow them because they seem to like the same book choices I do. I have to say though this time the reviews were wrong.

Dave Duncan did not build the characters or the world at all. The opening goes like this, in todays time a man named Smith dies. Three chapters later you find out that the dead guy was sharing the body of a Swordsman. There is very little character building for Mr. Smith/Swordsman. The swordsman had also died so that Mr. Smith could take over his body. A small god then gave Mr. Smith all the knowledge he needed to be a master swordsman. Poof there you go. I am a big believer in knowledge about the characters. Part of my enjoyment is deciding if a character would make a certian decision or not. If the author fails to develop the characters personality, I do not know enough to make that call. I love the story line itself but I did not like where the author went with the story.

7 of 9 people found this review helpful

If you could sum up The Reluctant Swordsman in three words, what would they be?

Great story. When I finished this book I immediately ordered and began to listen to the next book in the series

Great Narrator. Really got into the story

surprisingly deep, and full of lessons

very unusual book, love the Zen koan like aspects, as the story develops. one I can re-read over and over. the male centered focus may turn off some women readers, but if you read the characters as people, rather than man or woman, it can appeal to all. a story that teaches and entertains.