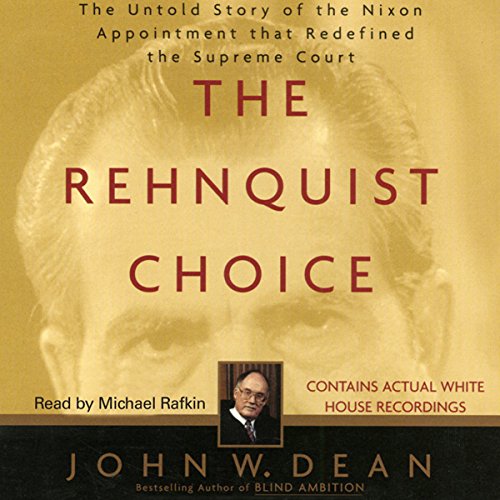 In the fall of 1971, when William Rehnquist was nominated to fill an Associate Justice seat on the Supreme Court, the Senate raised no major objections, and a little-known Assistant Attorney General found himself at the pinnacle of the judiciary.

It seemed a straightforward choice of a relatively young, academically outstanding and politically seasoned lawyer who shared Richard Nixon's philosophy of "strict constructionism." As Nixon's White House Counsel John Dean reveals for the first time that the choice was anything but straightforward. The truth is that Nixon's nomination was the result of a dramatic, Nixonian rollercoaster. Rehnquist was a last-minute longshot who had once been dismissed by Nixon as a "clown." Only John Dean -- Rehnquist's champion at the time -- knows the full, improbable story.

Dean's gripping tale is loaded with revelations such as Nixon's plan to pack the court by forcing resignations, before his inauguration.

The Rehnquist Choice fills in a long-missing explanation of the making of the man who wrote the majority opinion in Bush v. Gore and presided over the impeachment trial of William Jefferson Clinton.

"The inside look at chaos in deciding who should fill Supreme Court vacancies is a delight....Dean has performed a valuable service in recording Nixon's tortuous course to a decision." ( National Review)
"The most detailed behind-the-scenes account ever written of a high court nomination...impressive for many reasons: its lucid prose, its subtle humor, its relentlessly logical argumentation...a terrific page-turner." ( The Washington Monthly)
"Watergate buffs will find [ The Rehnquist Choice] jolly nostalgic fun." ( The Washington Post)

What listeners say about The Rehnquist Choice

What did you love best about The Rehnquist Choice?

This is a great account of both the Rehnquist appointment, and well as what might be called the Rehnquist compromise. Judicial appointments in the US have become so political, and since it is a life appointment, I suppose that is reasonable. Rehnquist was a surprise appointment, and became chief justice a few years later when Reagan elevated him to the top post. If you enjoy both politics, back room deals, and big egos, you will enjoy this book.

A unique peek into the first Nixon term

What makes this book most interesting is the fact that it was constructed by the use of the Nixon tapes. Rather than creating dialogue, the author literally transcribes what was said at that point in history. For a student of Nixon and/ or the Supreme Court, this is a valuable tool. It is ironic that despite Nixon's effort to build a court in his own philosophical image , that very same court eventually ordered Nixon to release the tapes that ended his presidency. It is also fascinating to find little nuggets such as Nixon's disdain for the ABA, which at one time was headed by Leon Jaworski, the Watergate special prosecutor. and, finally, Nixon's own words that a Supreme Court decision must be obeyed whether one agrees with it or not was prescient.