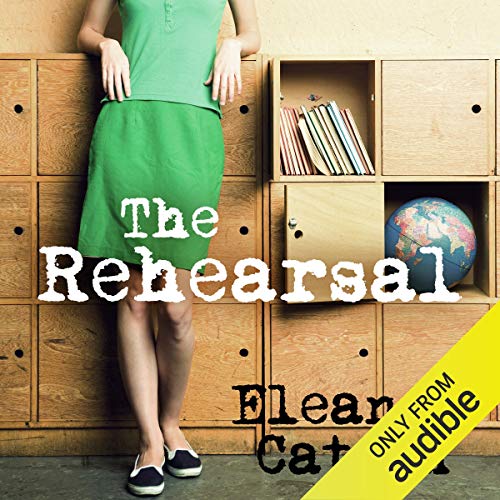 A high-school sex scandal jolts a group of teenage girls into a new awareness of their own potency and power. The sudden and total publicity seems to turn every act into a performance and every platform into a stage. But when the local drama school decides to turn the scandal into a show, the real world and the world of the theatre are forced to meet, and soon the boundaries between private and public begin to dissolve.

The Rehearsal is an exhilarating and provocative novel about the unsimple mess of human desire, at once a tender evocation of its young protagonists and a shrewd expose of emotional compromise.

Eleanor Catton was born in 1985 in Canada and raised in New Zealand. Her debut novel, The Rehearsal, was shortlisted for the Guardian First Book Award and the Dylan Thomas Prize, and longlisted for the Orange Prize. The novel garnered prizes and acclaim around the world, including the 2009 Betty Trask Award. It has since been published in 17 territories and 12 languages. Her second novel, The Luminaries, won the 2013 Man Booker Prize. She lives in Auckland, New Zealand.

"A wonderful debut by a truly exciting new writer” (Kate Atkinson)
“As debuts go, this one is astral - as well as teasing, intelligent and knowing - Catton anatomises brilliantly the psychology of youth, its sexual mores, it's posing pretentiousness, its worries, its bravado - So much accomplishment carried so lightly” ( Scotsman)
“It represents a starburst of talent and the arrival of an author wholly different from anyone else writing today” ( Sunday Times)
“Timeframes overlap and collide in this ingenious ontological kaleidoscope of a debut, but the experimentalism - which demands that the reader keep all her wits about her - is tempered by a real knack for narrative and a cast of painfully familiar teenage characters who are all desperate to be as confident, cool, charismatic and funny as possible. These are qualities that the extraordinary Eleanor Catton has in spades” ( The Times)
“The Rehearsal is no rehearsal. It's a supremely confident piece of writing - the clarity of its thought and language make it a definite contender for debut of the year” ( Independent)
“Brilliant - What Catton does so strikingly, and in such honeyed prose, is to capture the essence of adolescents - Catton has formidable talent” ( Daily Mail)
“This astonishing debut novel from young New Zealander Eleanor Catton is a cause for surprise and celebration: smart, playful and self-possessed, it has the glitter and mystery of the true literary original - the prose is so arresting, the storytelling so seductive, that wherever the book falls open it's near-impossible to put down” ( Guardian)

What listeners say about The Rehearsal

After reading the luminaries had to listen to Catton 's first book. simply astonishing can't wait for her next. Brilliant narrator.

Polished but why bother?

Would you try another book written by Eleanor Catton or narrated by Nicole Arumugum?

The narration is fine. I'd have no worries about trying another book narrated by Ms Arumugum. I don't think I'd try another novel by E. Catton.

Tricky to say how this work could be improved. I suspect some readers will enjoy it far more than I did. The use of language is very competent, as is the overall structure of the plot. What I have difficulty with is understanding why the author bothered to tell the story at all. For me, this recalls some of the work of A.S.Byatt which leaves me thinking that the author is performing a species of intellectual exercise with no good will toward the reader or anyone else.

Was The Rehearsal worth the listening time?

I decided that I'd finish it. And I did. I might even enjoy it more on a second listen.

Why was it written

Plot jumped all over the place and didn't really go anywhere. Seemed no point to the book

being less confusing, not jumping backwards and forwards through time and an explanation as to why some chapters were days of the week and some were months. If it wasn't for the fact that I'd read a review commenting on this fact, I would have been completely lost and probably given up with the whole book

What could Eleanor Catton have done to make this a more enjoyable book for you?

put some excitement into the book

If you could play editor, what scene or scenes would you have cut from The Rehearsal?

I only finished the book because I don't like giving up on any book, I got so bored with it that I just listened to get it finished.

You won't be disappointed, this is a cracking read/listen. Engaging, thought provoking, cleverly constructed, beautifully written. Narration to match.

I think I listened to chapter 1 three times to try & get the gist of the story but ended up more confused after every listen. The narrator was good, very pleasant & coherent I would not recommend this book.

I really enjoyed this - thought provoking, interesting and well narrated. It was confusing at times with the dates jumping around and some scenes being presented as enactments rather than "real life", but that was one of the aspects of the book that made it different. This would possibly have been less confusing if I was reading it as I could have looked back at the month of the last chapter to see where the current chapter fitted chronologically. I'm going to listen to it again as I think more will fall into place on a second listen. I am excited to read more by this author and would definitely recommend this book if you like something a bit different, something that is more of a study of human drives and inner thoughts than an action-packed read.