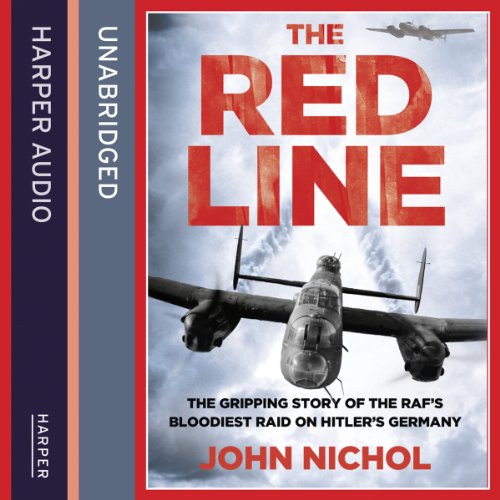 The Red Line: The Gripping Story of the RAF’s Bloodiest Raid on Hitler’s Germany

From best-selling author of Tail-End Charlie and Tornado Down comes this powerful and deeply moving account of Bomber Command’s 1944 Nuremberg Raid – the RAF’s bloodiest night of the Second World War. More men from Royal Air Force Bomber Command died on one single night of the Second World War than the total RAF aircrew losses during the whole of the four-month-long Battle of Britain.

This is the story of the air raid intended to be the climax of Sir Arthur ‘Bomber’ Harris’s relentless campaign to defeat Nazi Germany. The target was Nuremberg: 795 aircraft set out, nearly 700 men did not return. In The Red Line, we meet the young aircrew who flew on the night of 30 March 1944. John Nichol has interviewed the few surviving veterans, British and German, in the air and on the ground, to record the voices of a diminishing generation.

While the airmen of Bomber Command were among the greatest heroes of the conflict, their contribution and sacrifice has, until recently, been sidelined in the face of post-war criticism of Bomber Command’s tactics. Yet they were among the best of their generation. John Nichol’s dramatic tribute to the men who flew on the RAF’s bloodiest raid has provided the surviving veterans with the chance to tell the story of that terrible night – the night they flew to Nuremberg.

What listeners say about The Red Line: The Gripping Story of the RAF’s Bloodiest Raid on Hitler’s Germany

One of the best books I have ever bought

This book grabbed me from start to finish. My Interest in this particular period of aviation has always fascinated me, especially the Bomber War and I have now found a book that not only puts you in the aircraft, it also puts you underneath them as they dropped their bomb load. Vitally, it shows how politicians (one in particular) demanded the sacrifice of so many young lives and then disgustingly washed their hands of these brave men when the bombing became politically unpopular. However, it also shows the more unsavoury side of the RAF in its' cruel and spiteful treatment of those who had given their all and had nothing left to give, by stigmatising them with the dreaded, "LMF" label. As an ex member of the RAF, and seeing some of the bases where I served, mentioned, I could not help but feel the goose-bumps and the hairs on the back of my neck and arm raise as I placed myself "airside" and imagined an older type of aircraft to the ones I was more used to seeing, leave the runway. Even more poignant for me as a Ryhope, lad was how Cy Barton, won his VC. I was aware of it from a very young age but had never had it relayed in such a vivid and detailed manner. This is one of those books that I will re-visit again and again. Truly, History as it should be told. Well done, John Nichol

Interesting but a bit superficial

As a 'human interest' introduction to Bomber Command this is a good start. If you want a detailed description of an anatomy of a Bomber Command raid then Martin Middlebrook's books are the ones to read.

I found this an interesting and moving account of the raid on Nuremberg. The narration was fine until the reader read direct quotations, then a bizarre range of strange accents were unleashed. This is a pity as the accents often distracted me from the impact of people's accounts of duty, service and sacrifice hence the 2* for performance.

A great book from an excellent author

The story of the Nuremberg raid told throughout the stories of the men who flew on it. Another excellent John Nicol book

Strong in both story telling and also the historic events I thouthly enjoyed this audiobook.

Having recent listened and read several other books about Bomber Command recently I decided this would be an interesting listen. The story is good although lacks the detail of 'Lancaster' or 'Bomber boys' but still gives some good first accounts.. The Narrator has a good tone but unfortunately as soon as the story switches to the personal accounts the voice actor appears to switch to 'officer crabtree' mode whether its geordie, scouse, German or Winston Churchill they're all quite painful to listen to and take you away from what would be an otherwise gripping or poignant story. So in summary a good book spoiled by accents. If given a choice I would choose 'Lancaster' as more detail and better narration

I have a rather large WW1 and WW2 collection of books but this is the first Non Fiction book I've consumed focusing on Bomber Crews. A disgrace it took so long for them to be recognised, not their fault they had to bomb cities like Dresden, yet they took the blame not even getting a campaign medal!! Anyway either read or listen to this book, keep their memories and sacrifice alive like the soldiers in land and fighter pilots are through books and films etc. Highly recommend it.

One of the most gripping books I’ve ever read. How these crews did 30 or more trips i don’t know. The stress must have been damaging.

My first all 5 stars. With vivid detail from both sides, this book really brings ww2 to life.

Gripping story of true courage and comradeship. Read brilliantly and it was read so well that I could close my eyes and imagine I was in an RAF bomber over nazi occupied Germany.

The actors voicing the oral histories of the actual veterans works quite well, however the main narrator's style is like he's reading a children's book on Jackanory - not appropriate to the subject matter at all.