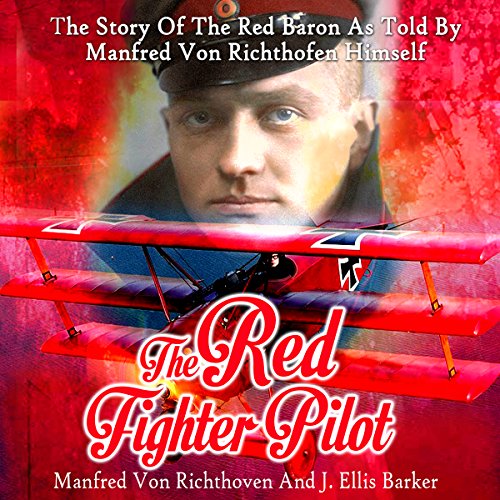 Manfred von Richthofen (1892 - 1918), also widely known as the Legendary Red Baron, was a German fighter pilot with the Imperial German Army Air Service during World War I. He is considered the ace of aces of that war, being officially credited with 80 air combat victories, more than any other pilot. The Red Baron only wrote one book, his "autobiography", Der Rote Kampfflieger. This was written on the instructions of the German Army Press and Intelligence (i.e. propaganda) section of the German Army Air Service. This book was written just before he was killed, and it details his meteoric rise from a cavalryman to one of the most well-known fighter pilots of all time.

What listeners say about The Red Fighter Pilot

The narrator needed to pause more at the end of each section and then after giving the title of the next section. It all ran together.

Narration is rushed, no emotion, sounded robotic. Could have used more color. The story was interesting though.

Insights into the Red Baron

As a pilot, I found the thoughts and personal notes fascinating from the top fighter pilot and ace of World War 1 with 80 aircraft down. His background and how he got into the Imperial Army Aviation Corp was informative. He was an observer, on the Russians front and was flying, for almost a year, before learning how to fly. His time with the greatest pilot, of his time, Oswald Boelcke, and the influence he had on Rickthofen made him a better fighter pilot. Although a short book, it was an abbreviated auto biography and a must read for historians studying the air war between 1915-1917.

Richthofen presents a unique perspective of a warrior who is operating in a then nascent aspect of warfare. Although the reading of this intriguing biography lacks enunciation and is rather flat, the performance does not take away from the legendary tales or from the insightful thoughts Richthofen offers of conflict and aeronautic development.

Ice Water in the Veins

The written narrative by Richthofen is choppy and in some places disconnected--but what do you expect? He wasn't a writer and his superiors ordered him to put something down for use as propaganda. He chose to write about some personal memories of the war up to that time. It is odd to hear them in his own words. What strikes a reader/listener today is how matter-of-fact Richthofen was about death and dying. He was all fatalism devoid of emotion. One wonders how much was training and war experiences as opposed to personal attributes? The human-ness of who he was killing doesn't seem to have bothered him, nor are deaths of his own comrades related with any emotion. The autobiography by the great French ace, Rene Fonck, has some of these qualities, although Fonck was a vengeance killer while Richthofen was not. Shortly after publishing his book Richthofen was wounded in the head and survived. Worth listening to if you know who the Red Baron was.