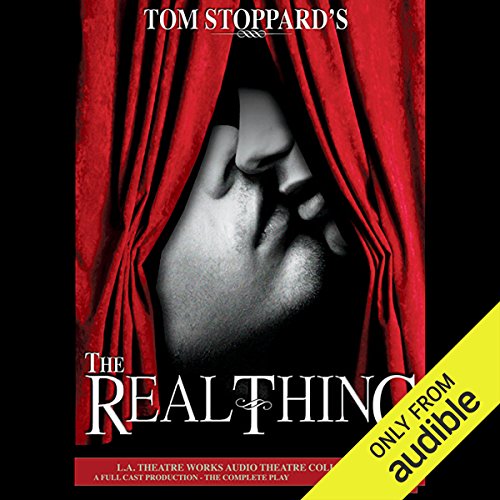 What listeners say about The Real Thing

I've watched this play, read this play, and now I have listened to this play in my car on my way to and from work. With tears of laughter obstructing my vision I was a road hazard! DUIOTS!

The play's name says it all

If you could sum up The Real Thing in three words, what would they be?

It's a vivacious play about love, (in)fidelity and art.

Henry, he's my favourite character as he seems to have the backbone which guides him through the life, even though he can be not in line with the "crowd" around, for example, his wife Charlotte or daughter. Yet, he learns a lot as the play progresses (in respect to Charlotte, Anny, for example), which shows his flexibility and consciousness at the same time.

This is the third time that I listened to "LA Theatre works" performances, and I am absolutely happy with their art. It's breathtaking, lively. Made me want to follow to the end. Flawless. Thanks a lot to the company!

The main characters repeating "Are you ok?" It's so caring. Henry's idea about love as knowing. Ann's understanding of fidelity.

It's the real Real Thing

Don't be fooled by the title; this isn't a play about Coke or Faith No More's best album (you watch; I'll get an argument on that last one) but rather a searching character piece about LOVE.

To be more specific, it explores the nature of love and how it means different things to different people. It includes betrayal, devotion, sex, parental love and that old favourite, unrequited love.

It also includes a brief exploration of highbrow and lowbrow art which, I suspect, is meant to draw a parallel with the nature of love... but, Hell, what do I know? My English Literature A Level was over twenty years ago now.

This is Tom Stoppard so you're guaranteed that it's going to be very clever and very funny. I laughed out loud a few times and listening to this play on my drive home was a great way to wash away the working week. Highly recommended.