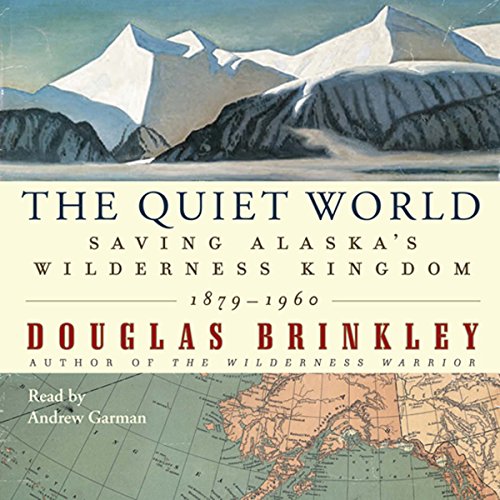 A riveting history of America's most beautiful natural resources, The Quiet World documents the heroic fight waged by the U.S. federal government from 1879 to 1960 to save wild Alaska - Mount McKinley, the Tongass and Chugach national forests, Gates of the Arctic, Glacier Bay, Lake Clark, and the Coastal Plain of the Beaufort Sea, among other treasured landscapes - from the extraction industries.

Brinkley introduces a lively gallery of characters influential in preserving Alaska's wilderness resources. And wildlife fervently comes to life in The Quiet World: Brinkley tells incredible stories about the sea otters in the Aleutians, moose in the Kenai Peninsula, and birdlife across the Yukon Delta expanse while exploring the devastating effects that reckless overfishing, seal slaughter, and aerial wolf hunting have wrought on Alaska's once-abundant fauna. While taking into account Exxon Valdez-like oil spills, The Quiet World mainly celebrates how the U.S. government has preserved many of Alaska's great wonders for future generations to enjoy.

What listeners say about The Quiet World

Where are Native Alaskans?

The history coverage was exceptional, I appreciated the context and depth.

It might better have been sub-titled, A Federal/National Perspective. Alaskans, save Mardy Murie, Celia Hunter and Ginny Woods were largely left out. Native Alaskans were ignored. How could a writer, who otherwise seems a great chronicler, mention Project Chariot and completely ignore the Native Alaskan voice?

I marked down the otherwise excellent narration because he murdered Alaskans names both people, e.g. Brina Kessel and places, e.g. Nunamiut, which grates on the reader.

A us history of alaskas wildlife

If you could sum up The Quiet World in three words, what would they be?

Would you consider the audio edition of The Quiet World to be better than the print version?

I thought this book might be tedious to get through: it's not at all. The author weaves a good tale which is inspiring. Let's persist in preserving ANWR!