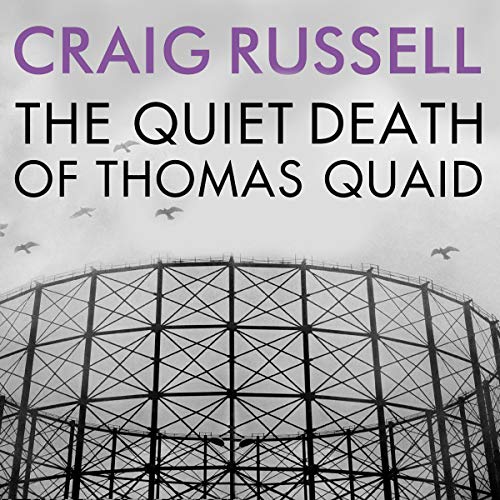 The Quiet Death of Thomas Quaid

The Quiet Death of Thomas Quaid

Amiable, easygoing, well dressed, with no vices to speak of - well, aside from his excessive drinking and womanising, but then, in 1950s Glasgow those were practically virtues. And besides, throughout his many exploits outside the law, Quiet Tommy never once used violence.

It was rumoured to be the police who gave him his nickname - because whenever they caught him, which was not often, he always went quietly. So probably even the police liked him, deep down.

Above all, the reason people liked Tommy was that he you knew exactly what you were dealing with. Here, everybody realised, was someone who was exactly, simply and totally who and what he seemed to be.

But when Tommy turns up dead, Lennox and the rest of Glasgow will find out just how wrong they were.

What listeners say about The Quiet Death of Thomas Quaid

This was another goodie in this series about the Canadian detective Lennox who is trying to stay on the right side of the law. Lennox finds this hard work in the post war Glasgow were there seems more bad guys than good ones. He almost seems like the Scots Canadian cousin of Philip Marlow.

Sean Barrett has the low gravelly voice that give a laconic tone that perfectly describes Lennox and his Scotland.

So good, the series should work on the big screen

This story, the characters and of course Sean Barratt's portrayal of Lennox was superb....as it has always been.
The blend of the dark elements of his character, Glasgow and the humour work perfectly together.
Rarely have I been so gripped by a set of stories that I feel disappointed I have to wait until another instalment become

As usual, Sean Barrett was excellent. He can do anything with his voice and any accent. His varying Scottish dialects were amazing. The story was menacing in its content and telling. The subject matter could have been unlistenable had it not been dealt with in such a "non-descriptive" way and allowed the reader to understand the implied horrors. The revenge attacks were masterful and the reader could not but help condoning this violence. Yes - I recommend it but not for the faint hearted.

Really enjoyed the most recent Craig Russell book. I've now listened to all the Lennox series and gave enjoyed them all. Great narration from Sean Barrett. Really keeps the atmosphere and the pace. Would recommend all of this series which creates a great gritty feel for 1950s Glasgow.

Not the best Lennox story but still way above the average, Craig Russell is a top writer, the highlight for me is the excellent story telling of Sean Barrett, top class. One character is a polish man with a glaswegian accent and Sean still nails it. Well done to all concerned.

Where does The Quiet Death of Thomas Quaid rank among all the audiobooks you’ve listened to so far?

This is the first time I've read Craig Russell, I would rate this book in my top ten and I haven't finished it yet.

Which character – as performed by Sean Barrett – was your favourite?

This book is a superb example of Sean Barrett's skill as a narrator. His dry delivery really suits this writer's style.

The writer drops in the occasional smart remark about a character or the police that made me smile and lifted the story out of the ordinary.

This latest story continues to live up the the high quality of writing and delivery as the previous books and can be enjoyed as a stand alone or as part of the series.
Highly recommended!

If you could sum up The Quiet Death of Thomas Quaid in three words, what would they be?

Which character – as performed by Sean Barrett – was your favourite?

All of them, Sean Barrett is the consummate narrator

Loved it, let's have another one soon

Excellent book - keeps you enthrawled right to the end chapter and wanting more. Will certainly be looking at this author some more

What a great book,from start to finish action all the way,the best Lennox book of the 5 but they all have been good.I do hope this is not the last of Lennox because Lennox is a great character.