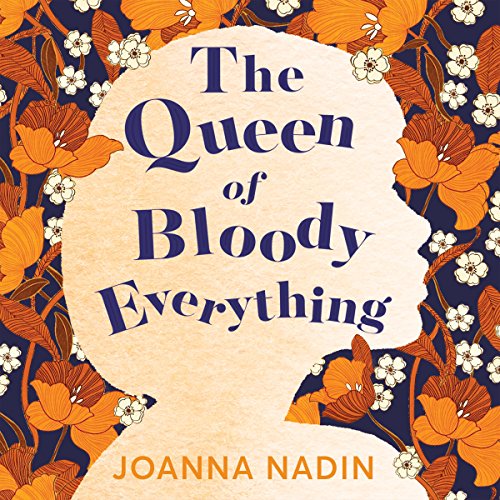 The Queen of Bloody Everything

And in that instant I fall in love. Not just with him, though he is the better part of it, but with them both, with the whole scene: the house, the garden, the magazine perfection of it. And I want very badly to be in this picture.

As Edie Jones lies in a bed on the 14th floor of a Cambridge hospital, her adult daughter, Dido, tells their story, starting with the day that changed everything.

That was the day when Dido - aged exactly six years and 27 days old - met the handsome Tom Trevelyan, his precocious sister, Harry, and their parents, Angela and David.

The day Dido fell in love with a family completely different from her own.

Because the Trevelyans were exactly the kind of family six-year-old Dido dreamed of.

In fact, as Dido has learnt the hard way, normal is the one thing Edie can never be....

What listeners say about The Queen of Bloody Everything

I was drawn into this book from page 1 and loved every page. It is simple yet very deep, moving in both a heart wrenching and uplifting way. The characters are brilliantly drawn and Kelly Hotten’s narration brings them perfectly to life. An outstanding production of a unique and wonderfully written book.

Insightful and intelligent, witty and honest

I've never read a book by J Nadin before, but after 'The Queen of Bloody Everything', I certainly will seek out other novels by this author.

I was engrossed by Dido's (the main character and narrating voice) story of her life and her deeply complex relationship with her mother (among others). I loved the honesty, the realistic observations of the contradictory feelings we experience towards loved ones. This is a story of love and longing, rage and resentments, fantasies and regrets. All are themes that are conjured through a brilliant narrative which is engrossing, unsentimental, but moving and tender.

Anyone who loves Lisa Jewell's 'The House We Grew Up In', Dorothy Koomsom, Amanda Prowse and Esther Freud would probably really enjoy this as much as I did.

Struggled to finish this story as I found it tedious and really didn’t care about the characters. Mother and daughter spending most of their time together fighting and bickering was just not enjoyable and the ending was very predictable.

I loved everything about this book , the characters, the narration and whole story. Definitely the best audiobook on my audible journey the past 2 years ! Moving, believable and highly relatable - especially if you grew up in the 70’s & 80’s. Thanks you Joanna - I look forward to your future adult books with anticipation.

A brilliant, funny and heartwarming book. Amazing story and so well read. Read it and weep with embarrassment, laughter and sadness!

Reminiscent of my own childhood,I adored this book , feeling as if I was there ! The voices were so apt,accurate and realistic.A brilliant performance.Thank you and I will never forget this book, Joanna Nadin. xx
,

The Queen of Bloody Everything - a joy from start to finish

Absolutely loved everything about this book and Kelly Hotten's narration was perfect! One of my favourite ever audiobooks

I listened to this book based on previous reviews and was very disappointed. I found the story to be very tedious, going round and round in circles around a couple of properties. I found the characters unappealing, never able to avoid questionable behaviour, either alcohol or drug induced. I would have liked to know more about Eadie and why she gave up her education and became estranged from her family, not just her constant repetitive bad behaviour.
I intermittently fast forwarded the last hour of this audiobook just to get it finished and done with.

I loved this - it's a fantastic achievement by Joanna Nadin (her first novel for adults) to follow Dido through from childhood into early middle age with the mass of crystal detail of each passing decade. How can Nadin remember so clearly all those 1970s things that children said and did with such accuracy? Dido lives with her truly awful ex-hippie-ish utterly selfish alcoholic mother when the Trevelyans move in next door - apparently the perfect family. Dido and Harry (Harriet) become best, best friends, she falls in love for ever with Tom her brother - and comes to love Mrs Trevelyan with all her silly tight-lipped ways more than her own hopeless chaos of a mother. But all families are chaotic, just some more than others.

I can't explain the plot without giving it all away - but it's completely absorbing, the sort of book you don't want to end. It avoids all conventional novelistic cop-outs - these are real people with real lives making the real mistakes we all make and doing the best they can to be happy - and usually failing. These are real people..Ultimately what lifts the whole book is that it's about accepting people with all their messy faults; it's about forgiveness and love.

i fell head over heals an never cried so hard

promise you its an albolute rollercoaster of a bloody story resmbled so parts of life i ve seen from a far or been though..😗 ..thankyou its was beautiful sad funny......😗😢

A beautifully crafted story of a dysfunctional family. Mother and daughter clashing at every corner and the sad, subsequent
trail of destruction for her young daughter. This was my first Joanna Nadin novel and she is a very clever writer. I loved her deep character descriptions, sucking me deep into the lives of them. I could barely stop listening as the excellent narrator brought this story to life. If you like an all-encompassing story with a sharp intelligent edge, you may well enjoy this book.