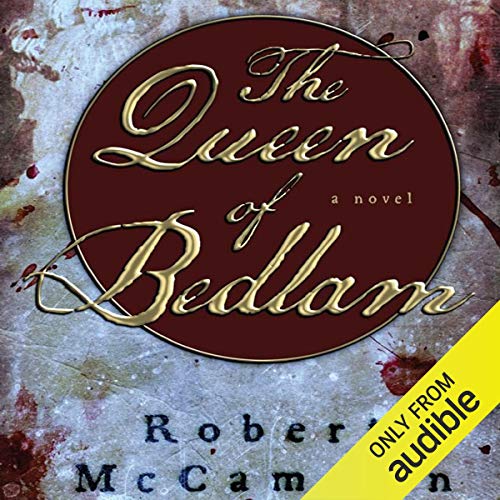 The Queen of Bedlam

The Queen of Bedlam

His epic masterwork Speaks the Nightbird, a tour de force of witch hunt terror in a colonial town, was hailed by Sandra Brown as "deeply satisfying...told with matchless insight into the human soul."

Now, Robert McCammon brings the hero of that spellbinding novel, Matthew Corbett, to 18th-century New York, where a killer wields a bloody and terrifying power over a bustling city carving out its identity - and over Matthew's own uncertain destiny.

The unsolved murder of a respected doctor has sent ripples of fear throughout a city teeming with life and noise and commerce. Who snuffed out the good man's life with the slash of a blade on a midnight street? The local printmaster has labeled the fiend "the Masker," adding fuel to a volatile mystery...and when the Masker claims a new victim, hardworking young law clerk Matthew Corbett is lured into a maze of forensic clues and heart-pounding investigation that will both test his natural penchant for detection and inflame his hunger for justice.

In the strangest twist of all, the key to unmasking the Masker may await in an asylum where the Queen of Bedlam reigns - and only a man of Matthew's reason and empathy can unlock her secrets. From the seaport to Wall Street, from society mansions to gutters glimmering with blood spilled by a deviant, Matthew's quest will tauntingly reveal the answers he seeks - and the chilling truths he cannot escape.

this is a great book from a story and history point of view. You will be hooked into the series .

Wonderful narration again and a more in depth main character than in the first book. An intriguing story with twists and turns that are enjoyably surprising and a little bit dark. I really enjoyed the new characters and can't wait to see how Matthew's life turns with the wind in the next book.

This author was new to me (even though he has been writing for years) and I found this series addicting. After I listened to the first one, I had to hear the rest.

The characters are well developed, the dialogue is wonderful and the humor is so funny and comes out of the blue that I had many REAL laugh-out-loud moments – and a couple of almost-drive-off-the-road moments.
Absolutely delightful series with wonderful narration.

Addicted to this series!

What was one of the most memorable moments of The Queen of Bedlam?

When the hero and heroine are trapped and about to be killed, the villain notes "she's not doing very well" and our hero responds "it's her first time being murdered."

His reading is transparent - by that I mean that I can see/experience each character clearly as he creates each unique voice and personality. He manages to voice an array of extremely well-crafted characters without overacting, not once, not ever, so that the listener is never aware of his presence. He's a gem. One of the best readers I've heard.

Moving right on to the next book. I hope McCammon and Ballerini have another one in the hopper, because I'm going to be lonely for Matthew when I finish #4.

An excellent follow-on to "Speaks the Nightbird"

A terrific story set in early 18th century New York. Edoardo Ballerini once again does a wonderful job on the narration. And the evil that Matthew Corbett encounters and unravels will make you shudder as you listen.

I've now listened to all four Matthew Corbett books by Robert McCammon, along with Swan Song, an earlier book. I find the Corbett stories and characters fascinating. Although mostly set in and around eighteenth century New York, don't let the historical nature of the books deter you. McCammon's writing style is full of invention, style and wicked humour.You'll find yourself chuckling one minute, the next wriggling uncomfortably as the young problem solver finds himself in yet another terrifying situation. I've lost count of how many sayings, phrases and concepts I've jotted down in my little notebook. Edoardo Ballerini narrated all four of the Corbett series, and I now rate him as possibly the best reader I've heard - sorry, Scott. The guy has to be heard to be believed. Although it's not totally necessary to read the books in order, I strongly recommend doing just that, starting with Speaks the Nightbird, then working through books 2, 3 and 4. I understand McCammon intends to write 10 books all up in the series, so I guess it won't be long before I'm back in Matthew's wonderful world once again. Do yourself a favour and start listening now.

It's hard to know which book I liked better--Speaks the Nightbird was the first in the series, and is one of the top 20 favorites in my library. The Queen of Bedlam will be added to that group.

I like it when an author doesn't feel the need to point you directly at the circumstances, or the joke, for you to "get it"- this author doesn't insult the reader's intelligence. It is a smart and witty novel about the hunt for a serial killer called "The Masker" in New York City. Our hero, Matthew Corbett, teams up with a detective agency just being established in the city. As was his style in the first book, Matthew goes about his business in a quiet, determined manner as he puts together the clues which ultimately lead to the truth. There are several sub-plots to keep things interesting, and a possible love interest as well. It is a slow build for the first 1/3, but after that, I didn't want to stop listening.

Set in the period around 1700, the author does a wonderful job of giving us a look at life during that time (NYC had a population of about 5,000) which is so rich in detail, it is like being there.

Bottom line--it you liked Speaks the Nightbird- you will like this one too. If you have not read the fist book- this one will stand alone, but I would highly recommend reading the first one to get the full story and rich background.

I am the Queen of McCammon!

I really like this series! Robert McCammon weaves early 18th Century history into outrageous plots-what is interesting is in this violent time Matthew Corbett retains his compassion combined with responsibility of life. Corbett at heart is a quiet, thinker who it is easy to enjoy - I can't wait for the 3rd book!

As always, Mr. Ballerini brings this book to life. His ability to provide unique voices to each character really adds depth to the reading of the story. This series has been an enjoyable way to spend my daily commutes.

It just gets better and better!

Mr. McCammon has the uncanny ability to make unbelievable situations, plausible - and enthralling! Again, I couldn't put this down! The narration was great, and tale was gripping. He introduces the master criminal, and another unattainable love interest. I can't wait to listen to the next installment!

McCammon is the KING of Historical Fiction!

I am so happy to have discovered this series. I love historical novels especially when they are full of mystery, murder and mayhem! Edoardo Ballerini is an amazingly talented actor who is the perfect narrator for a book of this length. I was never bored- he kept me engaged the entire time. The book is funny, sad, interesting and full of great characters. I highly recommend spending time in Matthew Corbett's world!

Wonderful series! Hate to turn it off and the narrator does a great job. What more could you want?

2nd book as good as first

Really enjoyed the 2nd in this series..well narrated..looking forward to yet more Matthew Corbett stories.

Loved it. Long, enjoyably complex and a strong culmination of the plot. Enjoyed the historic setting and the background in which the mystery plays out.

Speaks The Night Bird could have been a standalone but through this second novel we are now set up for further adventures both public and private with Matthew Corbett. Good fun and convincing historical details. Recommended.

I feel a bit let down with this as I have been recommending this author quite a lot and the past two of his I've read, weren't that great.

I'm a believer in fully unabridged books as I feel cheated of plot points in the lesser, abridged versions. However, in this book, a massive chunk could have been omitted and you would still have retained the pace. Without it, I"m afraid it was pretty slow.

Matthew is back and head hunted by a secret detective agency. He is still determined to avenge the abused orphans of his previous home and struggles with his own safety as a masked murderer prowls the dark alleys of New York.

I loved the first Matthew Corbett novel and wondered if there was any way to match the quality of that stunning book. I was so pleased to find that this is every bit as good. I love the characters, the way the author immerses the reader (listener) into the life of New York in the early 18thC, the twists and turns and red herrings of the plot. The icing on the cake is Edoardo Ballerini. His characterisations are spot-on and he brings Matthew totally to life. I read somewhere that there will be 10 in the Matthew Corbett series. I shall be downloading every one of them.

An Audio Delight to satisfy all your senses!

I loved this book! The book is beautifully written, and so well read that I could saviour the craftsmanship of the words, whilst enjoying the intriguing plot and the sheer delight of the characters as portrayed by the narrator. At points I laughed out loud at the delight of the language used to portray the character Matthew in his speech and thought.

The plot weaved along with subsidiary stories woven in, that made me listen for hours on end, and I was sad it came to an end. I loved the setting of New York in the late 1700's and the pompous class attitudes some of the characters were riddled with. Have recommended this to book to all my friends. Exciting finale will not leave you disappointed - read this book!

I felt that this was not quite as good as 'Speaks the Nightbird', but it is still exciting and fun, and the character of Matthew is developed well - although he is maybe a bit too perfect! It is a long book, but did not get boring or seem too long to me. I shall certainly look out for more of this series. Edoardo Ballerini narrates well.

Not quite as strong as the first in the series

I did enjoy this book, although not quite as much as the first one in the series. This one felt more like it was about developing the main character, getting him settled in a new situation and introducing a lot of new characters - all of whom are very enjoyable.

Like the first book, I saw the twists coming way ahead of their arrival, which isn't ideal for a mystery novel, but it really is so well drawn that I didn't mind and headed straight into the 3rd in the series.

I loved every minute of this book. Matthew Corbett is fast becoming my new favourite.

I am really enjoying this series of books. Very well narrated. Also thrilling at times