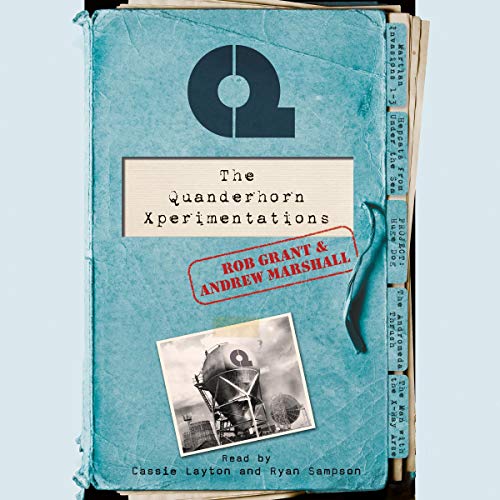 Churchill is Prime Minister for the last time. Rationing is still in force. All music sounds like the BBC Radiophonic Workshop. People like living in 1952: it's familiar and reassuring, and Britain knows its place in the world.

Meet Professor Quanderhorn; a brilliant, maverick scientific genius who has absolutely no moral compass. With his Dangerous Giant Space Laser, High Rise Farm, Invisible Robot and Fleet of Monkey-driven Lorries, he's not afraid to push the boundaries of science to their very limit.

Even when it's clearly insane to keep pushing.

Despite the fact he's saved the world from several Martian invasions, the attacks of the Mole People, the Troglodyte Shape-shifters and the Beatniks from Under the Sea, plus countless other sinister phenomena which threatened to rend the very fabric of reality, the Government would like to close him down. Why? Because they're terrified of him. Of his reality-warping experiments, of the mysterious button on his desk which he's constantly threatening to press. Of the unearthly secret locked in his cellar. And yet they're even more terrified it might stop being 1952 and they'll be out of power.

What listeners say about The Quanderhorn Xperimentations

Hilarious narration of the weirdest story ever told , it would benefit by editing out the multitude of chapter announcements.

I laughed until it hurt!

If you like Monty Python-esque humor or the Warlock Holmes series, you'll enjoy this one. This book is an awesome parody of the Quartermass Experiments but don't worry if you're not familiar with the original. Anyone who's read or watched any SciFi will get the jokes in this book. Clever and absurd with laughs that will catch you by surprise.

Rob Grant and Andrew Marshall have created a hysterical universe in this adventure. Much like Rob Grant's other major comedy success, Red Dwarf, the characters are absolutely hilarious when they play off each other. Brian Nylon seems like a perfect point of view character. Weedy, whimpy, nervous, never able to assert himself. Plus you've got Gurk the Martian, holder of a number of Martian awards - at various levels - the 'brave hero and warrior' of Mars who seems oddly unwilling to return home and Dr Janason and her scientific journal who is a perfect example of how to take the hard working scientific woman of the 1950s and use it for comedy. And there are so many others!

This entire tale is a perfect piss take of the 1950s Quatermass serials. I don't want to spoil anything too major. All I will say is you are sure to laugh yourself senseless! And I truly hope there are more adventures for Derius Quanderhorn and his scientific assistants. I absolutely loved the audiobook and I can hardly wait for more. Give this series a chance. I certainly didn't regret it!

I got this because I've always loved Quatermass stories (boffins save the world), Quatermass and the Pit is the greatest story ever told, and this is a zany irreverent, joke a minute retelling of all the 'scientist as hero' tales from early cinema. It's enjoyable, light and brilliantly narrated. It's in clear episodes, as if it was intended for serialisation. Like the Red Dwarf series, not all the humour makes it off the page, but there's enough going on to allow you to forgive. The 1950s settings means that there is buckets of xenophobia, misogyny, casual swearing, ageism, sexism, broad stereotypes everything you can imagine, so you have to leave your modem sensibilities at the door, but once you're in the flow it works as quick fire ear candy .... Mild spoiler.... Surprising, sad downbeat ending.

I can certainly see myself listening to this many times. It has got a great comedy rhyme and a very amusing way of viewing the story from each of the characters view points.
I agree the ending does kind of fizz out, but this doesnt detract from the overall experience

Having seen who the writers of this book were, I was really looking forward to it. I enjoyed the way each chapter was narrated by the individual characters. Unfortunately the confusion started with this meaning that the chapters were numbered as per character. The story itself seemed to be built on individual events that were connected by thin threads that were poorly explained at the close. As for the actual ending of the book, I was really disappointed. It seemed to be building to something..... but no, it just kind of died confusingly in on itself. I did enjoy parts of this but overall I felt let down.

i enjoyed this story being a fan of this comedic style in the 90's. this book has the sci-fi, self aware self parodying brittish/english humour.
"I have a sudden urge to stand behind someone and wait for something."

I do enjoy Scotsman scene a fillthy steriotype but when taken in the 1950s ere and mix it with the scenario in this, i have not enjoyed a comedic representational parody of my kin since the nakmackfeegle by Terry Pratchett.

other authers simmilar in style and tone have been Tom Holt, and of course Douglas Adams.

It passed the time, story was alright but nothing special, good to have on in the background