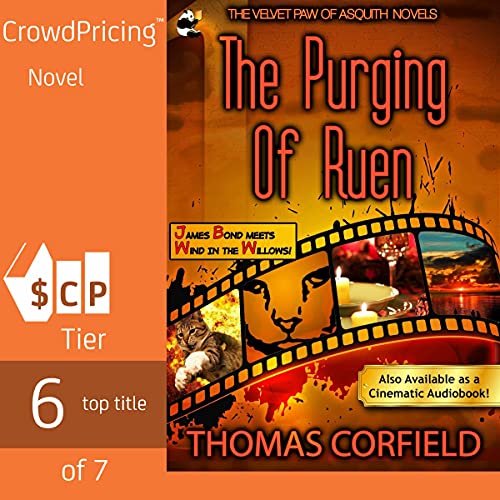 The Purging of Ruen

When assigned to determine the cause of brewing tensions in the exclusive seaside city of Ruen, Oscar Teabag-Dooven discovers that it's on the brink of tearing itself apart. Things become complicated when it appears those responsible are in charge of running the place.

Drawn into a scandalous plot of insanity and greed, Oscar befriends the Dervy, a young revolutionary, by throwing her off a cliff, and Horace, an elderly doctor with a phobia of worming ointments.

Together they battle the ruthless genius of Sedervitz Tappen-Noo and the grievous insanity of the Pyjami, in an attempt to save a beautiful city from certain destruction.

But things don't go according to plan. Principally because they don't have one.

What listeners say about The Purging of Ruen

I love this book and the previous two. the narrator is also the writer and this is the only time that I can say the author presented his book perfectly and delivered the best performance possible. I really hope the story continues. You can dedicate it to kristine, you're number one fan! (Other than family or friends. Lol)

I really want to write my own book one day and I hope that it's half as successful as yours.