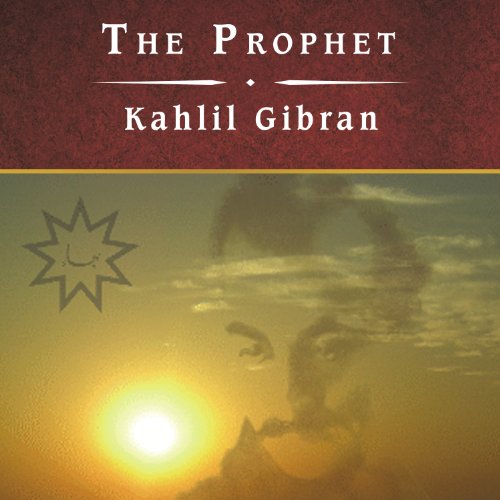 Almost a century after its publication, The Prophet seems to resonate with audiences more than ever. Indeed, a 2009 New Yorker article cited Kahlil Gibran as the third best-selling poet of all time, behind only Shakespeare and Lao-tzu. Part of The Prophet’s appeal can surely be attributed to its breadth - its ability to deal with subjects ranging from the lofty abstraction of love and spirituality to the seemingly superficial notions of clothing and beauty. All of Gibran’s musings are shrouded in his ethereal, but practical, brand of mysticism, rendered here in the lilting velvet baritone of performer Jonathan Reese. Reese’s sonorous voice is itself almost hymnal, as the performer deftly captures the cadence of Gibran’s prose poetry.

Kahlil Gibran - poet, philosopher, and artist - was born in Lebanon in 1883 but spent his final 20 years of life living in the United States. The three books that compose this audiobook are collections of Gibran's aphorisms, parables, and poetic essays.

The first book, The Prophet, was originally published in 1923 and is considered Gibran's masterpiece. It is written in prose poetry in 28 parts, and deals with such topics as love, freedom, good and evil, religion, and death. It is a mystical and intensely subjective work, presenting the human soul as essentially noble and good.

In The Forerunner, originally published in 1920, Gibran asserts that "Nobody is to be blamed for our 'being' and 'having' but ourselves." Gibran makes it clear that we are our own destiny and not the toy of a blind fate.

Finally, the titular entity of The Madman, originally published in 1918, is not literally mentally unbalanced; on the contrary, he is perfectly healthy. His madness is only in the eyes of others. Gibran asserts that we tend to be what society expects from us, even though these expectations could be detrimental for the development of our self-identity. Oftentimes, we veil our true selves with masks out of fear of being ridiculed by others.

What listeners say about The Prophet

A Classic that still Speaks to All

Although old style writing this book will never looses it’s magic. A must for old and young. Full of life lessons; packed with truths; an enormous source of comfort and advice. I have read it numerous times, referred to it when in doubt and feed on the advice when unsure... Highly recommended.

Just so awe inspiring and a top classic.

Okay I am being biased here but I must be truthful, this is the BOOK to have 2 copies of (for yourself), audio versions and electronic version too.I treasure this book since I first came across it 26 years ago, have given 5 copies away as gifts and now will give 2 copies to my kids.I adore this book and never tire of it, i love it and now can listen to it.Buy it, read it or listen to it and it resonates with your heart.A simple language of love and insight about the virtuous of being a human.!

To revisit again and again

/Good but could be better

The Prophet is wonderful, as always. It is beautifully written and makes your soul feel better reading it.
Having said that, the narration is somewhat lacking. There's something about the narration that murmurs s, "Sleep. Sleep now," until you can't resist. Otherwise, its great, and even with the lack luster vocals, it's still well worth the credit.