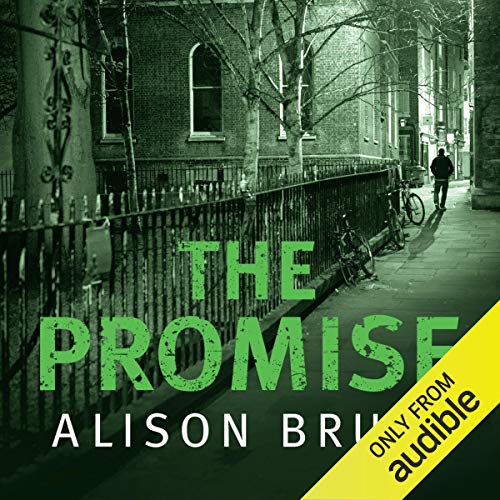 In a single night, Kyle Davidson's life is derailed. His relationship is over, he is denied access to his young son and everything important to him is at risk. His thoughts stumble between fear and revenge. Kyle Davidson has a choice to make.

Meanwhile, after the tragic end to a previous case, DC Gary Goodhew finds himself questioning his reasons for returning to work until the badly beaten body of a homeless man is found on Market Hill. Having known the homeless man for several years, Goodhew feels compelled to be part of the investigation - but routine lines of enquiry soon take a dark and unexpected turn.

Suddenly the Cambridge back streets hold deadly secrets for Goodhew, and the only person who has the answers is planning one final, desperate act.

What listeners say about The Promise

One of the better ones

Whilst I like the lightness of the narrator's voice he really does need to learn local pronunciations - perhaps someone local could proof listen before publication! It would be good if he had more character identification as well - like the other books before it he is "reading" rather than "acting" as good narrators seem to be able to do.

Plot wise, there is always the bit of gratuitous sexual violence in there again - that really could be left out for me but not as bad as in previous books.

Because of the location I hang in there with the Goodhew novels and this was one of the better ones for me.

Another excellent book by Alison Bruce

I have to say I'm a great fan of Alison Bruce's books. Helped enormously by knowing Cambridge. I can't wait for the next instalment. Lovely complicated personalities and great story line. Thank you.

I cannot believe all the glowing reviews for this book, however I have just skimmed through the reviews again to find out if I was missing something - only to see that the majority of the reviews are 'written in exchange for being given a free copy of the book'. However unbiased one tries to be - if the book is a gift there is bound to be a gentle attitude towards it. (Reviews on Amazon)

I am really struggling to latch onto this book, the characters are hardly worth getting to know - certainly not particularly likeable, the story is stodgy and very very boringly written. I can hardly be bothered to waste any more time on it, I am now on chapter 14 so have to weigh up the time lost against any possible gain should it become interesting. I will give it a little longer. ...... I decided after drafting this review to skip on towards the end just to find out who and why. It wasn't worth it!

Among the best UK crime writers

Would you listen to The Promise again? Why?

Although I have a long memory, there are certain books in some genres that I am drawn to re-read. I enjoy reading of the evolution of characters and how in the UK, the police are faring with PC, hi-tech, unbelievably bad promotions (which happen less frequently in fiction than real life) and the way the political system has colluded with and betrayed the forces. The author has racked up a good solid performance with this work, brilliantly read, making want more. I particularly like the way Cambridge and the university are depicted in the ancient tension between "Town and Gown." I seem to prefer police outside London and perhaps good writing is a reason.

What was one of the most memorable moments of The Promise?

Gary Goodhew, still a DC, has been in a dark place and is haunted not just by the past but family problems and nearly burned alive. Specifically, he shows all the behaviours and sensitivities of a PTSD victim. The point when he turns the corner and realises he can still function was one of the most memorable in the series.

Not a scene as much as the atmosphere of returning to work, hag-ridded by self doubt. At least Gary has a cat!

More than in the other book in this series, it stirred my emotions and a certain amount of identification with people who work in closed establishments; find personal friendships difficult especially when there is an area of competitiveness and professionalism being strangled by bureaucracy and funding difficulties. it is extremely difficult to write about PTSD unless you have been there and this makes PC Goodhew a character with even more depth. It's about time he did something with women in his life as a "quickie" now and then would lead him to realise that although the job is important and perhaps the only thing, you have to find some escape and not necessarily with your grandmother.

In one of the earlier books, the narrator was not given much credit. I think he does a wonderful job and through him Cambridgeshire is enriched. Readers who come from a non-UK background may struggle with regional crime novels but it's well worth persisting, especially in this case.

Sad each time the next book in the series ends... checked which book follows and keep checking to see when it may be available!

loved it, gripped all the way through. definitely worth reading the full dc Goodhew series

having lived in Cambridge for the past 15 years I thoroughly appreciate the Knowledge the author has of the local area and happily follow her characters around d the city and villages . the story line has its twists and turns and as always I am left guessing who the baddie is. great book especially if you're a local .