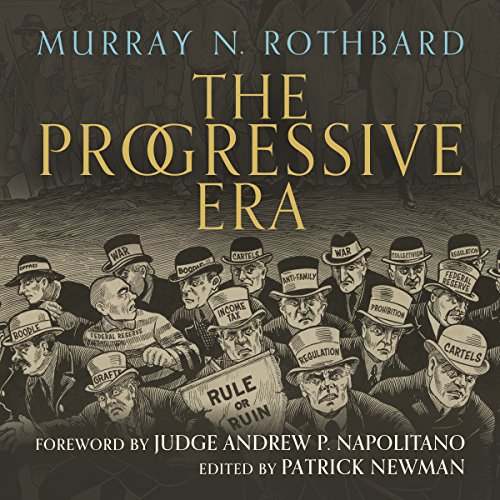 Rothbard's posthumous masterpiece is the definitive book on the Progressives. It will soon be the must read study of this dreadful time in our past. (from the foreword by Judge Andrew P. Napolitano)

The current relationship between the modern state and the economy has its roots in the Progressive Era. (from the introduction by Patrick Newman)

Progressivism brought the triumph of institutionalized racism, the disfranchising of blacks in the South, the cutting off of immigration, the building up of trade unions by the federal government into a tripartite big government, big business, big unions alliance, the glorifying of military virtues and conscription, and a drive for American expansion abroad. In short, the Progressive Era ushered the modern American politico-economic system into being. (from the preface by Murray N. Rothbard)

What listeners say about The Progressive Era

Details... Oh my God, the details

As a history teacher I feel this book does us all a favor. It's always good to have the other side of the story. The book feels like a mix of historical reporting, academic explanation and endless accounting of details. I have utilized sections of the text in my highschool history classes to great results. Great book but I'd suggest some more mainstream history first so that you can understand many of the references, counter points and refuted claims. Even just a solid mainstream documentary could work as a primer.

Awesome read for anyone into history.

Rothbard hits another home run. A must read for people who loves history. Its nice to get the other side of things, rather than just the propagandistic version we're taught in public schools.

Rothbard, as detailed as ever clearly lays out how everything you learned in history class about the progressives about the late 19th and early 20th century was a deception. Every single chapter will shock you.

I commend the author for the copious research and digging up thorough details. But I felt I was so deep in the forest that I couldn’t see enough trees. I am sure the points were excellent for those who got them but I found myself thinking very often “what is the point he is making?” At some points, I was completely lost and sensed that there was no flow at all. I felt like it jumped around a lot. I suspect this is a book that is better read than listened to (for me) because there were many footnotes and statistics and details that were difficult to connect audibly. I have listened to 3/4 of the book and have given it a pretty good chance. I have decided to request a refund. The narrator’s pronunciation was also a little off for me and distracting, but otherwise an adequate performance.

Though I had some knowledge of the progressive time period, I found after listening to this audio book, there were huge gaps in my presupposed perceptions. My thanks to the Mises Institute for making this superb volume available!

This is a interesting read and is packed full of information. The footnotes are overdone and having a paperback copy might be a better way to enjoy this book.

Easily the best book I’ve ever read for framing the modern political environment of the corporatist state.

very enlightening context to the political careers of T. Roosevelt and H. Hoover (and others). very nice audio performance