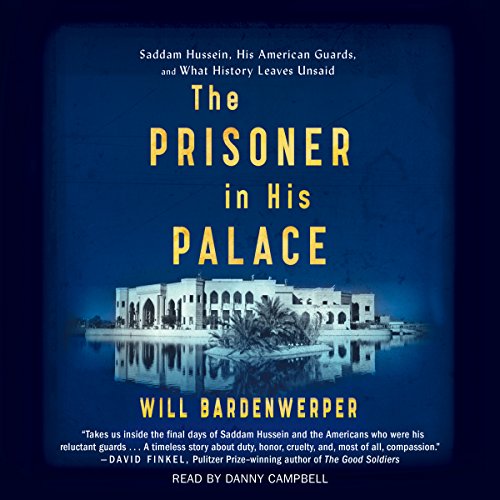 The Prisoner in His Palace

By: Will Bardenwerper
Narrated by: Danny Campbell
Free with 30-day trial

A book that, in the haunting tradition of In Cold Blood and The Executioner's Song, lifts away the top layer of evil and finds complexity beneath, this is the bizarre tale of 12 young American soldiers who are deployed to Iraq in the summer of 2006. Rather than fight the enemy in combat, the men are unexpectedly assigned to guard the country's notorious leader - Saddam Hussein - in the months leading to his execution.

Living alongside and caring for their "high-value detainee" in a former palace dubbed The Rock and regularly transporting him to his raucous trial, many of the men begin questioning some of their most basic assumptions.

Thoroughly researched and provocative, The Prisoner in His Palace contrasts two very different Saddams: the defiant younger man who uses torture and murder as tools and the older man who proves affectionate, charming, and unexpectedly courageous in the face of looming death. In this artfully constructed narrative, Saddam, the "man without a conscience", manages to get everyone around him to examine theirs. Many of those who bid good-bye to Saddam will be forever changed by the experience, and we wonder if we ourselves will.

What listeners say about The Prisoner in His Palace

Worth a listen. You won't be disappointed.
People are hard to work out. life is fascinating.

The Human Side of a Brutal Dictator

I like this book which showed the imprisonment, trial and execution of Saddam Hassan from the perspective of the 12 U.S soldiers assigned to guard him during this time period with the back drop of the Iraq invasion.

It was an amazing book to me because you see the human side of Saddam a narcissist psychopath but who developed a bilateral friendship with these guards. A man who could kill his own people but save the crusts from his breakfast to feed the birds at the palace which became his prison. I know it sounds crazy but You kind of end up being inspired by Saddam Hassan in a way because of his life style and the relationship with these guards during this time period. The author takes you right up to, the point of and the time after his execution almost as if you are walking the steps of the gallows with him. It was interesting to me as to the way he died and the way he lived as well as his outlook on life during this time period.

I would highly recommend the book. It's an original.

The prisoner in his palace

A great insight. Well researched. Highly recommended to understand what our serving men and women go through on a psychological level.

I don't know what to say

Behind every prisoner, murderer ,monster, dictator, a hidden human and you just need find it

Did Saddam Hussein have a childhood filled with abuse? Yes. Was he a brutal dictator who tortured individuals and was responsible for the deaths of thousands upon thousands of groups and people? Most definitely. Was he a grandstanding showboater at his trial, one who spoke of the torture his captors inflicted on him even while grinningly apologizing to them because they actually treated him so well. Sure.
Was he a kind and sympathetic old grandpa type to the young men who watched him during his days before execution? Yes, he was that too. One who made the young men like and respect him? Yes, but I think that has more to do with the basic humanity of the young men, the Super Twelve as they dubbed themselves.
"The Prisoner in His Palace" is an account of some of Saddam's early life, some of his actions as heinous dictator, some of his bombast during his trial, some of his interactions with the Super Twelve. It paints the portrait of a normal man who lacked what the soldiers had in spades: empathy, if you're looking. His execution, his death, left the men conflicted and struggling in their lives afterward. There's not as much of the interactions between him and the young men as I would've liked, was looking for, but where there is shows that he could indeed be kind and sympathetic. So when he was executed, the men felt the horror of the coldness of offering someone up to death by execution rather than by a firefight in the heat of battle. How do you do that and live with yourself afterward? The conclusion shows that they all had problems with it, suffered because of it.
But it was because they were thinking, feeling, sensitive individuals, not because Saddam had a layer of warmth unknown to the rest of the world.
Make of it what you will with this book; it's fairly short so it doesn't really go as in-depth as a longer work could've. But I felt more for the soldiers than I did for Saddam...

I couldn't stop listening to this story. I could picture every moment. Very detailed and holds your attention.

A surprising & intriguing look at the psychology of everyone involved in this unique situation.

I really enjoyed the store. though at times I had wished it had gone into a little more detail overall I loved it and couldn't put it down.

A solid debut from a first-time author

What was it like to guard one of the world's worst dictators when he was on trial for his life? Twelve U.S. Army MPs got to find out after they were assigned to guard Saddam Hussein while he was tried for crimes against the Iraqi people. Early in the book, the author, former Army officer Will Bardenwerper asks, "Is evil who we are, or what we do?" The answer: a little bit of both, as time marches on and we evolve into a person reflected by the sum of our choices. In the case of Saddam, those choices were epically wicked. But in the game of international politics, where evil abounds, we're forced to ask whether or not removing him was worth the cost in American and Iraqi blood. Bardenwerper's answer is unmistakable, never more so than when he recounts the cruel twists of fate that befell many of the men who guarded Saddam once they returned home to civilian life. "Prisoner" is a solid effort that had me looking forward to the author's next book.

A very interesting take on a well known story. But so much more than what we think we knew. Well written and narrated.

I listened to this book with an open mind. it is very interesting on how the US soldiers developed a friendship with such a monster. But I guess even a monster has its charm.