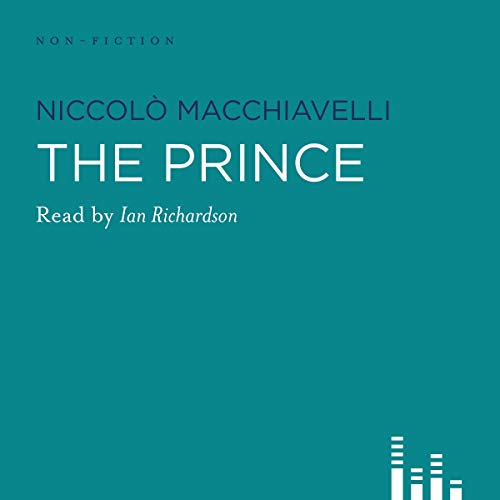 How remarkable that an Italian living in the 15th and 16th centuries should lend his name to a word still in common usage in the English language today. Nicolo Machiavelli (1469-1527) wrote only one major work as a gift for his ruling Prince, Lorenzo de Medici. Machiavelli held office as a senior civil servant for 14 years until the downfall of the Republic in 1512. No longer officially employed to impart advice, instead Machiavelli poured out his ideas and resentment in his writings. The Prince as remained a prominent classic ever since; valued for its shrewd psychological insight, powerful words, and prophetic quality. And even today, it has never lost its power to shock and influence. Ian Richardson's formidable reading of this modern unabridged translation is an accessible and entertaining way in to a truly compelling world view.
Public Domain (P)2005 CSA Telltapes Ltd

As one would expect, Ian Richardson reads with flawless pronunciation and diction, and the listener is able to hear and understand every word of the text.
It would be good if Audible used English stage actors more often as its readers or narrators. They are clearly the best in the world. I'm Australian and if there was a choice of: "English, Australian or American narrator?", then it is a no-brainer - apologies to the latter two options, but I would elect to go with the first choice each time.

Ian Richardson, an actor best known perhaps for his performance as a very Machiavellian Prime Minister in House of Cards, a BBC miniseries, sounds every bit the same well bred, dignified and ruthless schemer in this reading of The Prince. The book retains a great deal of relevance, with themes such as the promotion of pre-emptive strikes, the political uses of religion, and cultivation of fear for political gain. Many leading political figures are very influenced by this book. The influencial neo-conservative thinker Michael Ledeen even considers Machiavelli an 'idealist.' Listen to this for some real insight into the mechanics of power.

I know I'm not the first to say this, but it is amazing to see how relevant this work still is, and will probably continue to be, as long as human beings are the same. Machiavelli presents a brilliant analysis of history and draws frighteningly convincing conclusions on "how to rule". Morals, honesty and lawfulness are all considered and dismissed as irrefutable laws: if one's object is to be a successful ruler, one should definitely strive to appear generous and kind, but to know when and how not to be those things. As relevant today as it was almost 500 years ago.

The narration on this audiobook is nothing short of perfect.

This one is ALL about the voice. The late and much-lamented Ian Richardson was one of my favorite actors. His reading is a pleasure to listen to while he imparts superb clarity to Messer Machiavelli's thoughts.

The Prince is as relevant today as ever

Would you listen to The Prince again? Why?

I am going to buy a hard copy of the book. Often when I read a book that I want to refer to in the future I turn around and buy a hard copy. However, this was so interesting and insightful that I may even listen to the book again. This is a classic because it is genius. It clearly and concisely lays out the political strategy used by President Obama to gain power, and I suspect others have used parts as well. Obviously, you can not murder your opponents, but you can do everything possible to destroy (legally) those who oppose you. That is clearly the strategy used by everyone in power these days. Except in Iran, Syria, Egypt, or Libya where they actually do kill their opponents. Watch Putin as he deals with his political opponents, he jails them or runs them out of the country, or has them killed. Nothing has changed much, only the names and dates. This is as good an analysis of political (or bureaucratic) behavior as one can find.

What other book might you compare The Prince to and why?

Really, for me the Prince was unique. I like old books that shed light on our modern lives. I include "Democracy in America" by D' Tocqueville and the "Protestant Ethic" by Max Weber in that category. I also include "Confessions" by St. Augustine and Plato's descriptions of Socrates's works.

Machiavelli's description of his analysis of ancient kingdoms and principalities and how they were brought low by 1). other Nobles/elites; 2). the common people; 3). foreigners; or 4). Their own army. This of course is exactly the same from ancient times through today.

No, I listened to it over a period of days.

I did not listen to the Prince until i was 59 years old. I should have listened to it when i was 29! This is good instruction for anyone analyzing any organization and its leadership and power struggles. Understanding these basic principles will help one make sense of the world in which we live.

It brought back memories

I remember reading this for school. I loved it then and I love it now. The guidance it gives a person helps in leadership development all the way to a hostile takeover. Even though I am not a fan of takeovers, I felt I should put this in my review. Ian Richardson gave the writing a sense of historical importance. Great book to read. Great book to listen to.

Lifts the veil of politics and politicians...

Awesome book. Gave incredible insight to what is going on in today's politics. Must be required reading for members of congress. Ian Richardson reads the book as if he has memorized his lines and is reading it as if he were reading it to The Prince. His knowledge was worth more than gold. I was sad it was over...

The narrator is great but the content is too out-of-principles for me!!
Just finished the 7 habits of highly effective people listening to Stephen Covey emphasizing for 12 hours on the importance of real deep principles then Machiavelli, feeling dizzy :)

A Masterpiece with perfect narraration

Having read this book years ago I didn’t understand its meaning. But after studying the Medici and Borgias along with the overall renaissance I finally understand the dedication to Lorenzo the Unfortunate and that it was written using Cesare Borgia as the model of “The Prince”. Plus, as having been in the business world for almost 30 years you can replace the word Prince with CEO and Principality with company and it translates beautifully to corporate leadership. Narration was perfection especially since the actor was the lead in the original “House of Cards”.

Best narrator for The Prince

I wish there was an exact translation on kindle for the text that would sync with this audio.

One of the first books I read for fun (as opposed to academically) was ?The Prince?. At the time it came across as crisp & pithy, but more like a manual for politics than a living, breathing text (similar to Sun Tzu's ?The Art of War?).

The fantastic thing about this Audio book is that it brings the cadences of ?The Prince? to life. Whereas the book is pretty much dredged for advice & the anecdotes are disgarded, Ian Richardson's presence forces you to engage with his story & with the fascinatingly varied life of Machiavelli. As the other reviewer has said 'the late Ian Richardson of House of Cards fame is exactly the right voice for this piece'. I would add that his qualities as an actor bring clarity & vivid detail to what is otherwise a political textbook.

And what did Machiavelli live through? Some of the most Interesting times (in all senses!) in Medieval Italian politics, when the Pope, Venetia, France & Spain all vied for dominance of Italy (& all eventually failed in some regard). It is in this backdrop provides fruitful material for Machiavelli to dissect. At each stage Machiavelli states how the states work, what things they did right & what failures lead to their downfall.

And the best part was the ending, where he appeals for a united Italy. In the book this comes over rather plainly, but with Ian Richardson's compelling reading, you really feel the depth of feeling that Machiavelli wished to convey.

My one criticism is that the intense analysis is not ideal if you?re listening in the car. To understand the analysis fully it needs your full attention.

So, definitely a worthwhile purchase & a valuable insight into the passion & intensity of one of history's greatest political commentators. If you like this particular one, then I thoroughly recommend Dawkins' reading of ?On The Origin of Species?. It is always good to hear dry non-fiction brought to life by a narrator.
Why?
Only a true Machiavellian would understand...

I've listened to upwards of 10 versions of this book. This is by far the best.

Ian Richardson helps bring alive one of the most famous political books of the last millennium, it is well worth the purchase!

This is what it is, a non fiction how-2 guide for obtaining and keeping political power.

Its dry but very well written and holds your attention and isn't too long. What makes this version is the performance of Ian Richardson he really sells every word.

If your going to listen to Machiavelli's The Prince then this is the version to get.

from start to finish,
just love it..

more of that kind of style we need in this era

A medieval self help book

Step back in time for three hour a see how best to run a country, with the most famous of all political advisor. Short enough to listen to in one session, with enough tips to help you through life, I kid you not, in this book you can see how it could help you think different whether through work or home, it's not all about stabbing someone in the back

I was disappointed that I didn't enjoy this book to the end. It is excellently read by Ian Richardson, but after a while it becomes rather repetitive in the philosophy of the nature of government and for the modern reader/listener, if not well-versed in classical history, many of the illustrations from that era of history are unhelpful.
I should imagine the book would be more interesting to those who study politics and philosophy.

The narration is pretty good, however, the story itself is very boring. It is difficult to follow it since its content is about politics.

This renaissance suppository for the Italian ruling class has long been a staple of the new university social science oeuvre - an unfinished opus that red-brickies swap shamelessly over the Chardonnay. Yes, it's all sounding a bit 80's now isn't it?
But still, we soldier on manfully and laugh along with Ian Richardson's pince-nez, pronunciation even if we can't fill in the referential gaps....'I've just finished re-reading Niccol? Machiavelli (1469-1527), the Italian historian, statesman, and political philosopher, whose amoral, but influential writings on statecraft have turned his name into a synonym for cunning and duplicity....those olives are delicious aren't they, how much did they manage to get for it in the end..? She was hoping for a lot more than that...'