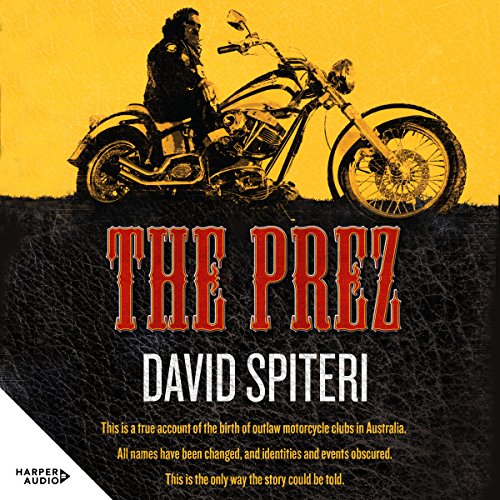 The true story of 40 years inside one of Australia's first outlaw motorcycle clubs as told by its one-time president. With previously unrevealed insights into the outlaw world of extreme violence, drugs, corruption, sex, treachery, and retribution. All names have been changed, and identities and events obscured. This is the only way the story could be told.

This story is a true account of the birth of outlaw motorcycle clubs in Australia. There was no template for us, it just evolved. It shows our simple creed: loyalty to the club and respect for your brothers.

David Spiteri was a founding member and long-time president of one of Australia's first outlaw motorcycle clubs from its inception in the early 1960s through to the early 2000s. He has been uniquely placed to witness the clubs develop from loose affiliations of riders to the well-structured and well-connected groups we see today, with links to police, politicians, and lawyers.

In this never-before-told inside story, Spiteri puts himself at risk to reveal everything from the drug trafficking which funds the clubs' operations to the extreme violence that continues to make them infamous. For the first time, the true extent of the clubs' corruption will be exposed, and the treachery and subsequent retribution enforced by their own brand of law known as "the code" is brought to light. A truly shocking and compelling look at a fascinating subculture.

Book was entertaining. Characters were pretty stereotypical. Wouldn't really rave about it, nor recommend it to anyone.

The main character can do no wrong. He always knows the right thing to say. It got really boring.

Great listen once you get used to the format.

A great book. the only criticism I have is that it hard to visualize the characters in the story and no rough ages or physical descriptions are given.

Was enjoying this until it got to the sex scene with the strippers. Could have been good or even a bit sexy, but it read like it was written by and for teenage boys. What a shame. Refund requested.

Very good book i would recomend it

Dino marnika did a great job narrating this he is the best you can identify the characters with dino,s diffrent voices UNREAL

really enjoyed this book. having worked and lived near some of the places the book mentioned made it really easy to imagine the scenes.

the reading/voices were a little comical at times but it didn't take from the story and was well done. the story is great and I enjoyed it very much. the only thing that would of been nice would be a time line. I like imagining the areas and knowing the era helps to get a feel for the atmosphere. especially knowing some of the places mentioned through the years. Loved it.

Pretty funny actually especially some of the voices, it ended a bit abruptly but he could have gone to 200 chapters easy, my guess it's the Rebels MC as they are a proper outlaw club and run on loyalty

Killer book, great mix of the 50s and 60s Biker culture in Australia! Its a great story and learning some Aussie slang is fun!

great book, slow start. but picked up with a great story line. a really good read.

loved this book. tells a great story and the performance was great. can't wait to listen to the next one

great book start to finish.was gripped throughout. love the biker gang story's,good in-depth to what they got up to.Did end quite sudden. and the lady's Voices were a little off putting. definitely worth a listen.

Narrator so bad, had to stop listening to it as it was like nails down a chalkboard after 45 mins