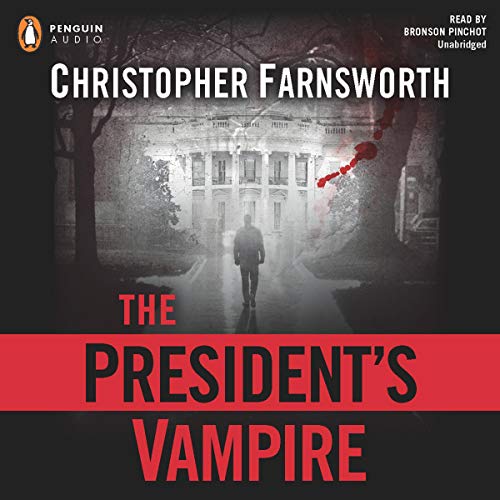 For 140 years, Nathaniel Cade has been the president's vampire, sworn to protect and serve his country. Cade's existence is the most closely guarded of White House secrets: a superhuman covert agent who is the last line of defense against nightmare scenarios of which ordinary citizens only dream. When a new outbreak of an ancient evil - one that he has seen before - comes to light, Cade and his human handler, Zach Barrows, must track down its source. To "protect and serve" often means settling old scores and confronting new betrayals...as only a centuries-old predator can.

What listeners say about The President's Vampire

Nathaniel Cade, the ultimate defender of the world, is back with his plucky but sexually deprived handler, Zach. In The President???s Vampire, Cade uses his super strength and senses to protect people of the world against an old but newly, genetically altered foe. In this installment, we learn more about Cade???s skills, and Zach displays toughness in the face of adversity. I had no idea he was capable of such moxie. Finally, Tanya is still present, and her presence is still inexplicable. This book is interesting but is not as good as Blood Oath. Bronson Pinchot, again, does a wonderful job bringing characters to life.

This is a vampire series (3 books). You don???t have a doe-eyed female saying bite my neck or a Clan of vampires trying to integrate into society or take over the vamp world. What you do have is a reluctant vampire; he made one mistake and has to attone for it for the rest of eternality
Cane is bounded by a pledged but also believes in fighting for the values of Unites States of America. Cane goes out (with his sidekick Zach) to fight the monsters so you and I can sleep monster free. As a matter of fact, he is sooo good we don???t even know there are monsters. So we have got espionage, vamps, politics, the values of ???Red, White and Blue??? (our flag) and a vampire who does not understand 21st century colloquialisms.

This is a great series. Like-able characters, good premise. Imagine HellBoy with a vampire instead of a devil, and you've got the idea of this book. Well narrated.

My first review, that good. Start with Blood Oath.

What did you love best about The President's Vampire?

The story is awesome. I stayed up all night listening to this nonstop. Great take on an old subject.

What does Bronson Pinchot bring to the story that you wouldn???t experience if you just read the book?

Bronson is my new favorite narrator, sorry Marc Vietor. Bronson bring a large group of voices and makes each character come to life. I was equally impressed with the narrator as I was with the story.

I don't imagine you're reading this unless you've read the first installment of the series, 'Blood Oath'. If I'm being honest, this second book in the series is a shade less potent than the first installment. Still pretty darn good though - I definitely recommend reading / listening. I'm maintaining the five star rating because, at the time I'm writing this, I've read the third book, which was awesome. Overall, this series holds five stars. If you're a fan of 'Blood Oath' but think this is a weaker tea, keep drinking, you'll be happy you did.

When you combine Pinchot’s enormous talent with a compelling, sometimes terrifying story, you have something well worth the listen. I forgot I was only listening and not watching! I’m looking forward - enormously - to the next instalment.

This book does'nt bite {much}

Where does The President's Vampire rank among all the audiobooks you’ve listened to so far?

Funny story about a vampire presidential War Hero. He'll do anything for the country its in his oath. One of the most enjoyable of my nonserious listens.

The conversations between Zach ( the human handler } and Nathaniel Cade the coolest vampire.

I always love his narration. One of my very favorites now. I like that he has no annoying tics, story flows well.

When Cade shows up to rescue Zach.

I was just trying this book was a very nontypical vampire novel. I trust Broson Pinchot to narrate any novel well. Wasnt expecting much. Very happily surprised.

This was a unique story. Very enjoyable.

What other book might you compare The President's Vampire to and why?

Blood Oath is the first book in this series.

What does Bronson Pinchot bring to the story that you wouldn’t experience if you just read the book?

His portrayal of Nathaniel is great.

Cade and Zach are back with more adventure and carnage. Zach has accepted his position with resignation and some humor, while Cade is trying to be patient with Zach's inexperience. The two are developing a rapport that is kinda cute in a way. I hope Christopher Farnsworth is able to come out with another Cade & Zach book soon.

Farnsworth & Pinchot--a match made in ... heaven?

Excellent political thriller, love that Cade. And Bronson Pinchot... who knew? I'm adding him to my short list of most-listenable readers. Amazing!

Nathaniel Cade does it again

I love these books by Christopher Farnsworth, it's just a shame he's not writing them anymore..
This is another great story, I love the flipping back and forth throughout Cade's timeline, I love the obscure comments from the file "nightmare pet", but most of all I like to see how Burrows develops.
I've bought the paperback books, I've bought the Kindle and audible copies this is one of those books I want to read / listen to again and again.

I enjoyed the story, it is a totally different take on a vampire. I just wonder why he took the oath. I find the speaker lacking a bit of change in speech whenever he needs to switch, but that is it.