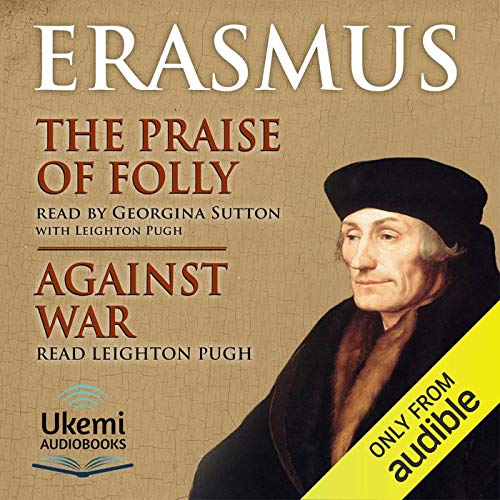 The Praise of Folly/Against War

The Praise of Folly/Against War

Desiderius Erasmus of Rotterdam (1466-1536) was known as Prince of the Humanists - though a theologian, a Catholic priest and the leading European scholar of his time. A close friend of Sir Thomas More, Erasmus' writings had a strong influence on the growing movement for change in Christian Europe, both Lutheran and the Counter-Reformation. These two essays are among his most important - and well-known - writings.

'The Praise of Folly', written in Latin in 1509 and spoken by the goddess Folly (who champions a lively enjoyment of life), was a bold satire on (in the cautious contemporary environment) not only Western classical traditions but also the Catholic Church. Dedicated to More himself, Erasmus wittily challenged entrenched views in so forthright (and humanist) a style that it could have brought him in direct conflict with the papacy. Fortunately the pope, Leo X, enjoyed the humour and the challenge! It is here presented in the lively modern translation by Leonard H. Dean.

'Against War' (c. 1517) is 'an impassioned plea for peace among beings human, civilised, Christian'. A deeply humanist text, widely read through Europe in the ensuing years, it has a continuing currency. 'Nothing is either more wicked or more wretched, nothing doth worse become a man than war.' Leighton Pugh reads the classic translation by John Wilson.

What listeners say about The Praise of Folly/Against War