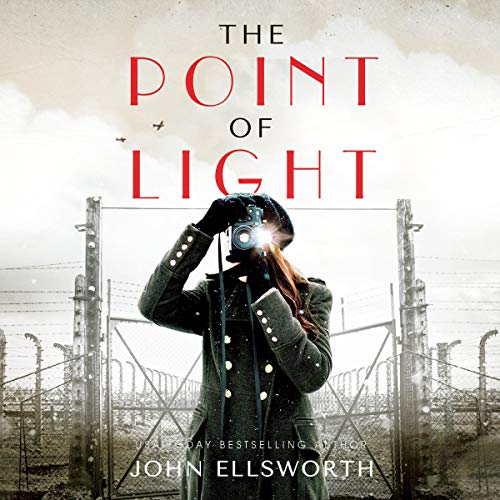 The Point of Light

For fans of All the Light We Cannot See, Beneath a Scarlet Sky, and The Nightingale comes a historical novel about one woman’s gallant, fearless search for war-crimes evidence during the most terrible times of World War II.

May 1940 - Paris. On the eve of her 18th birthday, Claire hears the devastating news: the German army has invaded her homeland, and her beloved Paris has fallen. Within months, her life is turned upside-down. She takes in an orphaned Jewish toddler only days before her beloved German-born husband Remy is forcibly conscripted into the Nazi army. In desperation she connects with other young members of the French Resistance, determined to fight back in whatever way she can. Armed only with her wits and her 35mm camera, she looks for the one photograph that will expose the Nazi horror for what it is.

When her rebellion is discovered and Claire is sent to Auschwitz, she knows her moment has arrived. A Nazi officer, hiding in the shadows of Auschwitz, commits an unspeakable atrocity, a war crime. Can Claire help bring down the beast who emerged from Auschwitz? Or will her secret evidence die with her as the SS hunts her down?

The Point of Light is part of the Historical Fiction series, a collection of John Ellsworth wartime novels. If you love thrills, clandestine plotting and a dash of romance, dive into these books today! From USA Today best-seller John Ellsworth.

What listeners say about The Point of Light

I don't often write reviews, but I really wanted to add my voice to those of other reviewers - the narration is terrible. Not only does he make everyone sound like they're in a soap opera, but he can't even pronounce 'Auschwitz' (unforgivable given that this is a historical fiction book set during WWII).

The story is interesting and covers a long period of time, but the characters are completely one-dimensional and most (including the protagonist) are ridiculous caricatures of themselves. If you're into historical fiction, particularly to do with WWII, I'd give this one a miss. Read The Nightingale, All The Light We Cannot See or The Tattooist of Auschwitz instead.

Every American young adult needs to hear this story. I grew up knowing of many of this because of a neighbor that moved in And head experience much of this. At the time what that did was bringing it home to me. In the 60 years since much of those fears have been rested. It's a very good book that steers those emotions again.

Narration ruined the story which was questionable

Narration was too dramatic, and annoying. The story may have been ok, but you wouldn't know it

While the storyline is easy to follow, the narrator is far too dramatic and makes the characters unrelatable and not believable. This would have been far more enjoyable with a different narrrator.

Narration leaves a lot to be desired.

Narrator is overly dramatic....to the point of making the story totally unbelievable. I could not even finish it. Additionally, there were so many holes in the story and things that just didn't ring true. Granted, it is a work of fiction, but it is based on historical events about which much has been written. Perhaps had the narration been better, I could have tolerated the holes in the story.

The main problem was the orator. He was so melodramatic that I felt like I was listening to a soap opera rather than historical fiction. I got half way through and just could not take it anymore. Story May have been intriguing but could not get past the immaturity of the reader.

loved the story however hard it was to get through the horrible narration. Important story to be told. yes I would recommend this to other listeners just try to get past the narrator.

Firstly, this book sounds ridiculous! The American narrator only succeeds to highlight further the terrible cliches and poor writing. The characters are so one dimensional and their lack of any emotion baffling considering the topic.

The story is unbelievable- captives of the Nazis wouldn’t be put up in a hotel with a spending account.
The narrator is unbelievable-no one speaks that way.
So disappointed, really wanted this to be a “good listen/story”.

Good story with some problems...

I thought this was a good story and it certainly kept my interest throughout. However, there were some inconsistencies in the story and some poor WWII research that was distracting. Had the narrator been a better actor I would’ve found the book more fulfilling. I felt his reading style was ill suited here. I’ve heard him voice female characters in the past and he voices women immaturely and as whiners when the scenes do not lend to the same.

I love reading about strong amazing women. We could learn from their strengths. Amazing story.