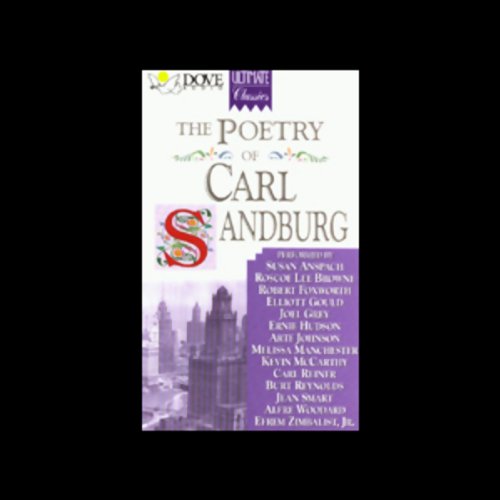 The Poetry of Carl Sandburg

Carl Sandburg wrote poems with such soulfulness, lyric grace, and love and compassion for the common man that he was known as a "poet of the people." Here is a collection of 95 of his best works, including "Chicago," "Fog," "To a Contemporary Bunkshooter," "Masses," and "The Great Hunt," as well as other verses on themes like love, war, death, loneliness, immigrant life, and the beauty of nature. These early poems, which earned him enormous popularity in the 1920s and '30s and a Pulitzer Prize in 1951, are read here by Susan Anspach, Roscoe Lee Browne, Robert Foxworth, Elliott Gould, Joel Grey, Ernie Hudson, Arte Johnson, Melissa Manchester, Kevin McCarthy, Carl Reiner, Burt Reynolds, Jean Smart, Alfre Woodard, and Efrem Zimbalist, Jr.
Public Domain (P)1996 Dove Audio, Inc.

What listeners say about The Poetry of Carl Sandburg

I really appreciate hearing these poems read by such a wonderful diversity of voices. Loss and Buttons are just two examples of poems I wouldn't hear the way they are read here. I love these writings.
check out my blog: readingcarlsandburg.com