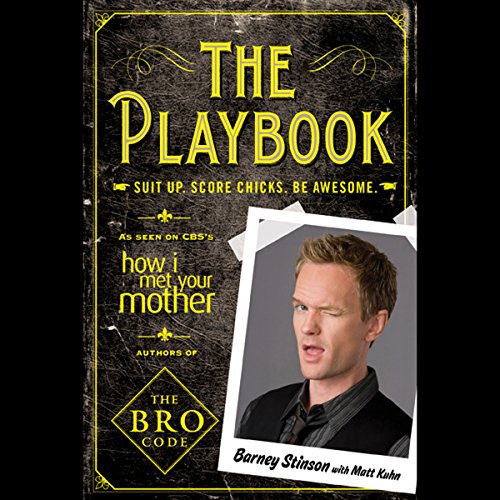 Since the dawn of history, man has searched for the answer to the most fundamental of questions: “Why am I here... not banging chicks?” The search is over. Now, with the help of The Playbook, you’ll be able to approach any beautiful woman, discover her innermost passion, and use that to trick her into sleeping with you. You’ll master more than 75 seduction techniques, developed by pickup guru and all-around good guy Barney Stinson, guaranteed to turn you into a bona fide ladies’ man.

What listeners say about The Playbook

If you're a huge fan of How I Met Your Mother, then this won't really be anything new (remember the episode with the scuba diver?). However it's still hillarious in a Barney-esque way and an entertaining listen. Definitely got some good giggles from it.

A must have for all HIMYM fans. Unfortunately it does not contain the best play ever. "The Robin" Which would make this book legend wait for it dary Legendary! Self five!

Everything you'd expect if you're a fan of HIMYM.

Yes, but probably only to my single buddies. Your females friends may either find this hilarious ... or offensive.

What does Neil Patrick Harris and Barney Stinson bring to the story that you wouldn’t experience if you just read the book?

I think the tone and flow of the book was perfectly communicated by NPH, which is something that may not have come across as easily on paper. Also, having NPH / Barney Stinson read the book himself was a big bonus for me as an NPH fan.

Do you think The Playbook needs a follow-up book? Why or why not?

'Write a review about The Playbook that becomes so popular your clout skyrockets, then just sit back and pick from the many women as their emails come rolling in.' is my sad attempt at creating one of the plethora of hilarious plays in this book. They range in effectiveness from 1% to 100%. Why would they include in a play book a routine for picking up women that is only effective one out of one hundred times you ask? Because if you pull off that play my friend you are legen.......wait for it........dary!!! lmao.
In all seriousness this was more enjoyable to listen to than the Bro Code, which is another in the Barney Stinson series, although I haven't fully explored the supposedly amazing PDF. At 10.95 for a member, I would pay outright rather than use a credit for this one. Enjoy, as it will have you laughing out loud even if you are by yourself(not as easily achieved as when with others)!

funny hookups ... the narrator was an excellent choice , no other than barney stinson

If you like HIMYM you will love this book. I really want to try some of these plays.

Exactly what you'd expect from HIMYM

This was an entertaining 2 hour book. if you're a HIMYM fan or just a Neil Patrick Harris fan, you'll love this. It fits the character of Barney to a T.

IF YOU ARE HIMYM FAN LISTEN TO THIS . THIS IS BEST OF BARNEY STINSON.. HE IS LEGEN wait for it DARY...

A book of lists for the hardcore HIMYM fan.

What made the experience of listening to The Playbook the most enjoyable?

I really enjoy when characters expand their beyond just their TV roles. Neal Patrick Harris did a great job portraying Barney Stinson in this book, as he has done for years on "How I Met Your Mother".

Would you be willing to try another book from Barney Stinson and Matt Kuhn ? Why or why not?

I would have to physically look at the book before doing another one of these. It was just a listing of all the plays in "The Playbook' and it got repetitive after a while.

Which character – as performed by Neil Patrick Harris and Barney Stinson – was your favorite?

Barney Stinson of course! NPH never broke character either, which I really enjoyed.

I usually listen in 45 minute blocks during my commute and rarely listen to audiobooks outside the car.

Again, I wish I had a chance to glance at the physical book before buying the audiobook. It was an entertaining book and NPH did a great job, but the repetitiveness of the listing of the plays got stale near the end.

I thought this would be funny, but it's just really dumb...I only listened to about 45 minutes before I turned it off.

Why did I think it was dumb? The way the author presented/read the content was annoying--trying to be slapstick, which may have worked...but the content is just stupid.

Would you consider the audio edition of The Playbook to be better than the print version?

The fact that it is Neil Patrick Harris reading it in character as Barney, it was an instant selling point as a fan of the show. Sure having "The Playbook" as an actual book would have been awesome too, but there is an added bonus here that you could not have gotten by reading the book itself. Hearing it from Barney himself

It's pretty much every twisted, sexist plan you would come to expect from Barney, full of ones you would have heard having seen the show but many of them are not. It was pretty cool and funny too at the same time.

What does Barney Stinson and Neil Patrick Harris bring to the story that you wouldn’t experience if you had only read the book?

Well you might read it in his voice in your head, many of us would with any other kind of novelty book but hearing it from man himself (both the character and the actor) brings a sprin would might not have gotten otherwise.

I wouldn't imagine they would, there is not much of a plot to turn into a film, I guess it would be his catchphrase from the show. It's going to be legend wait for it dary! legendary

This book is Legen wait for it

DARY,LEGENDARY
This book is amazing just like barney Stinson its awesome and lived up to expectations