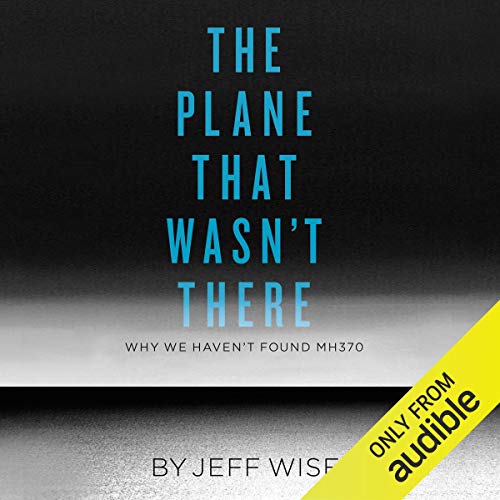 The Plane That Wasn't There

The definitive investigation into the greatest aviation mystery in history, with a startling hypothesis about who took the plane, where they took it, and how. On March 8, 2014, Malaysia Airlines Flight 370 disappeared. A year later, still no trace of the plane - or the 239 people onboard - has been found. But why? In The Plane That Wasn't There, science journalist and CNN aviation analyst Jeff Wise sweeps aside the conspiracy theories and misconceptions and lays out, with clear concision, just what we know about the plane's fate - and what we don't. The deeper into the technical details one delves, Wise reports, the stranger the case seems. He proposes that in order to make sense of the data we have, a radical new hypothesis ought to be considered - one that he lays out in gripping detail, complete with modus operandi, flight path, possible perpetrators, and a startling destination. Jeff Wise is a science journalist specializing in aviation and psychology. A licensed pilot of gliders and light airplanes, he has also written for New York, The New York Times, Time, Businessweek, Esquire, Details, and many others. His 2011 Popular Mechanics story on the fate of Air France 447 was named one of the Top 10 Longreads of 2011. His last book was Extreme Fear: The Science of Your Mind in Danger. A native of Massachusetts, he lives in New York City with his wife and two sons.

What listeners say about The Plane That Wasn't There

If you have a true interest in MH 370, stick to Richard Quest's book. This one is very short, disorganized, random, and full of outlandish far-reaching conspiracies. I was so disappointed I decided to write this review despite never having reviewed a book on Audible before. Save your money, buy Quest's book instead.

Wise offers an interesting but ultimately unconvincing argument to explain the disappearance of MH-370 in March 2014. He speculates that the flight was hijacked by Russian special forces in response to international sanctions that had been imposed on Russia as a means to pressure the Putin administration into ending its war against Ukraine. He cites as proof of a hijacking the complete lack of aircraft wreckage in the ocean despite months of sea searches mounted by various governments. Of course a hijacking may well turn out to be the most likely answer to the mystery of Flight 370 one day, but Wise's Russian hypothesis, although superficially appealing to conspiracy types, is implausible at best, supported by little more than a James Bond-like scenario involving highly trained special forces operators’ taking over the plane only a day after the U.S. government announced its support for international sanctions. That hardly seems enough time to mount the complex operation Wise describes. Certainly, the author offers no solid proof that would stand up to careful legal analysis. The book’s major strength provides a fascinating, albeit frequently deeply technical, analysis of the plane's extremely complex operating systems; it makes for tough going for readers who are not experts in avionics and aircraft engineering, but the details are enthralling.

A very entertaining book, based upon a tremendous variety of research looking for the Occam’s Razor explanation of what could possibly have happened to a Boeing 777 aircraft one of the most modern passenger jets currently in service and a totally unblemished record of airworthiness with no mechanical issues or crashes. While filled with scientific information, such as flight vectors and electronics and avionics, it never leaves the casual reader behind or wondering what are they talking about. It lays out facts and allows you to pick the scenario that makes the most sense to you. A gun read of a dark subject! You won’t regret reading Mr. Wise’s book!

I’d love to hear an updated epilogue to this book, that includes an analysis of the marine debris since attributed to MH 370. I’d also love an included PDF with links to maps and data.

This is a wonderful exercise in problem solving, but underlying the puzzle is the fate of 230 souls. My heart is with them and their loved ones. They make this far more important than a mere logic puzzle.

That said, Jeff Wise is painstaking in laying out the data, and his logic in drawing deductions from that data. I’m always skeptical of throwing out data sets to better fit a hypothesis, and I remain skeptical in this case. Other than that rather large hole, which he justifies in more than one respect, I find his logic valid.

This was fascinating to listen to. It’s well narrated, though I slowed the narration in a few places to listen more closely.

He supports his hypothesis well, and isn’t dogmatic about asserting it as the only possible answer. But if his hypothesis IS correct, then we need to be watching certain foreign powers far more closely.

No need to believe to enjoy

Whether you’re into conspiracy theories or not. This book is a lot of fun in terms of learning how aircraft work in the modern era. And how an lost aircraft search is conducted and is well worth the read

The Russians did it!!!! I'll bet the author beli in Russian collusion in the 2016 elections, too.

Informative and interesting book. I really enjoyed the deep dive into this topic and the author did a great job. Narrator was easy to listen to as well.

This looked interesting and was free so I picked it up but after about half the book I realized that it is now badly outdated. All his conclusions rely on no debris being found, except they were found shortly after the book was published and definitively traced to the missing plane. They also recovered data from the pilots home flight simulator that makes it clear he planned this. Would’ve been a fun theory at the time but now badly outdated.

While I understand that this was published in 2015, less than two years after the disappearance of MH370, the author still displays a lack of understanding of many aspects of aviation in general and of the search for the Malaysian B777 in particular. I am an aviation enthusiast, not an expert, but I know a fellow amateur when I see one. His superficial understanding of certain aspects leads him to uncertain conclusions on which he builds far-fetched theories (for example : We haven’t found pieces of debris floating around therefore the plane must have landed somewhere, and the Russians are the most likely suspects). Anyone seriously interested in the subject should definitely read Ean Higgins’ book “The Hunt for MH370” and Richard Quest’s “The Vanishing of Flight MH370”.

This book is pro-US and anti-Russia propaganda. The author runs roughshod over known historical facts to force through his rather 'reaching' theory that pro-Russisn terrorists hijacked flight MH370! Omitted completely is that when this flight went missing, the US Obama Administration was funding, arming and politically supporting a neo-Nazi regime change in the Ukraine and Crimea. Obama brought the neo-Nazi 'Maidan' Junta to power but this pro-EU regime could only gain control of Western Ukraine (despite committing various military atrocities against the Ukrainian people). The people of Crimea voted to re-join Russia whilst the people of East Ukraine voted to declare their Independence from a Ukraine controlled by US-backed neo-Nazis. If the two Ukrainian passengers did hijack MH370 it would have been entirely for the benefit of US and Maidan regimes! If you search online, you will find videos of the Maidan regime 'celebrating' the Nazi German annexation of their part of the former USSR in 1941 - which saw thousands of Catholic Ukrainians joining the German SS Units and carrying out atrocities against Russians, Jews, Gays and the Disabled, etc.

Fiction or should I say Science Fiction. A rushed story that made no sense.

What could Jeff Wise have done to make this a more enjoyable book for you?

Give me my money back

Would you be willing to try another one of Jeff Wise’s performances?

OK but but felt like it need more time!

This book is only OK as it doesn't go into much detail! Felt like he needed to expand the research and go into a lot more detail!

The possible scenario at the end was a nice idea, but again he could of cover a few of the possibilities not just one!