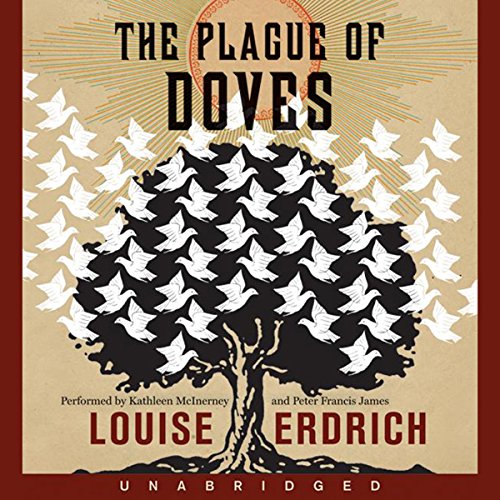 The Plague of Doves

The unsolved murder of a farm family haunts the small, white, off-reservation town of Pluto, North Dakota. The vengeance exacted for this crime and the subsequent distortions of truth transform the lives of Ojibwe living on the nearby reservation and shape the passions of both communities for the next generation. The descendants of Ojibwe and white intermarry, their lives intertwine; only the youngest generation, of mixed blood, remains unaware of the role the past continues to play in their lives.

Evelina Harp is a witty, ambitious young girl, part Ojibwe, part white, who is prone to falling hopelessly in love. Mooshum, Evelina's grandfather, is a seductive storyteller, a repository of family and tribal history with an all-too-intimate knowledge of the violent past. Nobody understands the weight of historical injustice better than Judge Antone Bazil Coutts, a thoughtful mixed blood who witnesses the lives of those who appear before him, and whose own love life reflects the entire history of the territory.

In distinct and winning voices, Erdrich's narrators unravel the stories of different generations and families in this corner of North Dakota. Bound by love, torn by history, the two communities' collective stories finally come together in a wrenching truth.

The Plague of Doves is one of the major achievements of Louise Erdrich's considerable oeuvre, a quintessentially American story and the most complex and original of her books.

What listeners say about The Plague of Doves

This story is full of quirky, interesting charcters, touches of magical realism. This book unrolls across the generations and is a uniquely American tale. The audio version is smooth and easy to listen to.

Another great take by Erdrich

I thoroughly enjoyed these stories of many different people whose lives are intertwined. I have always loved Erdrich's novels- the way she tells stories. It is somewhat poetic in the way she weaves their lives into words.

I’m very disappointed in you Audible. The reader of this book did not pronounce Aboriginal names right, which is so integral to this story, that is has ruined it for me. I rarely have issue with the readers because they are usually so well matched but in this case you need to find someone (best Aboriginal) who gives the names and other words the respect they deserve. I adore Louise Erdrich and think she would best read her own story.

Worth it for the first chapter

The plague of doves is an infestation of passenger pigeons, and Erdrich made it real for me as never before. Because I had read 2 of the chapters as stories in the New Yorker, and pictured the characters differently, I personally had trouble making this hang together as a novel. The characters and incidents portrayed are compelling, even so. Yes, I'll probably read this again someday.

The readers are great. I loved most of it but not the section about Billy, his wife, M. & the religious group. It seemed like it belonged in a different novel. The thing that unites the novel is the murder partially described. But I wanted more development of the characters.

After reading a mildly favorable review for the book in the NY Times I decided to give it a go. Little did I realize what I was in for. The book is in need of an editor...a junior editor...anyone with a red pen and a bit of common sense. This book is endless. Beyond endless. Tiresome. Imagine a small town inhabited by one-dimensional characters who all sound so alike one another that the reader/listener can't tell one from the other. All they do is rehashing plot twists that could have been borrowed from a daytime soap. The gratuitous sex...what was the author thinking? There are too many options of far better quality to waste time on this "Plague."

While this book contains some wonderfully mythic material, I couldn't get past the delivery. The book jumps from 1st person to 3rd person narrative. It jumps from story-telling to what appears to be reading directly from someone's autobiography of their past.

I have read several of Louise Erdrich’s books!! This may be my favorite!! The characters seem so complex, human, larger than their overlapping identities! So many intricate twists! I listened to the story (the readers were great) and now I want to read a few parts, just to savor the moments & see what I may have missed!!

Please Stop with the Music!

I really enjoyed the story but the violin music in between sections of the book is extremely annoying and distracting to the narration. I don't like music in audio books generally, partly because I like to listen while I fall asleep and music startles me back awake. However, the music in this one was particularly bad enough to warrant this review. I hope that the producers of these books will take note for future productions.

I am a Roundhouse fan but this book missed the mark. Shopworn storylines. Cliched psychedelic ramblings. Unappealing characters with loose connections to one another. Solution to the mystery was given at the last minute in "by the way" fashion. I listened to the entire book like waiting for an ambulance at a train wreck. Help never arrived.

This book should have been great. I chose it to read while I was visiting the states described in the novel. In parts it was intersting and had potential but I found it very disjointed and in the end gave up on it.