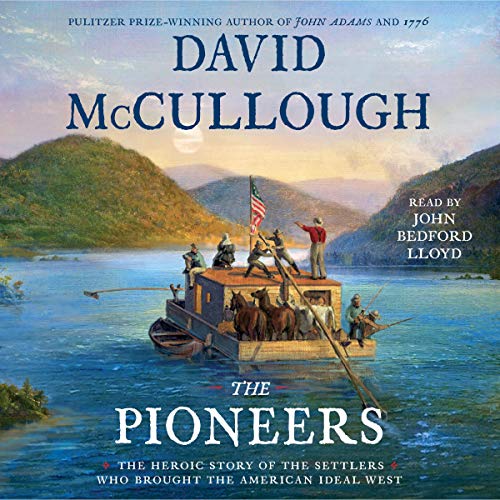 The Heroic Story of the Settlers Who Brought the American Ideal West
By: David McCullough
Narrated by: John Bedford Lloyd
Length: 10 hrs and 23 mins
Categories: History
4 out of 5 stars 4.0 (1 rating)

Pulitzer Prize-winning historian David McCullough rediscovers an important and dramatic chapter in the American story - the settling of the Northwest Territory by dauntless pioneers who overcame incredible hardships to build a community based on ideals that would come to define our country.

As part of the Treaty of Paris, in which Great Britain recognized the new United States of America, Britain ceded the land that comprised the immense Northwest Territory, a wilderness empire northwest of the Ohio River containing the future states of Ohio, Indiana, Illinois, Michigan, and Wisconsin. A Massachusetts minister named Manasseh Cutler was instrumental in opening this vast territory to veterans of the Revolutionary War and their families for settlement. Included in the Northwest Ordinance were three remarkable conditions: freedom of religion, free universal education, and, most importantly, the prohibition of slavery. In 1788, the first band of pioneers set out from New England for the Northwest Territory under the leadership of Revolutionary War veteran General Rufus Putnam. They settled in what is now Marietta on the banks of the Ohio River.

McCullough tells the story through five major characters: Cutler and Putnam; Cutler’s son Ephraim; and two other men, one a carpenter turned architect and the other a physician who became a prominent pioneer in American science. They and their families created a town in a primeval wilderness while coping with such frontier realities as floods, fires, wolves and bears, no roads or bridges, and no guarantees of any sort, all the while negotiating a contentious and sometimes hostile relationship with the native people. Like so many of McCullough’s subjects, they let no obstacle deter or defeat them.

Drawn in great part from a rare and all-but-unknown collection of diaries and letters by the key figures, The Pioneers is a uniquely American story of people whose ambition and courage led them to remarkable accomplishments. This is a revelatory and quintessentially American story, authored with David McCullough’s signature narrative energy.

Terrific book, as are all of this author's
As usual, I wanted to hear more. Learn more, know more. This is a periodic history I've never really been exposed to before this and I truly felt drawn into the times, sights and surroundings. Perhaps that's because I'm a Massachisetts Yankee too. I could so easily picture the raditional buildings, speech and meals. John Bedford Lloyd's reading/performance was just perfect and added to my enjoyment! I would recommend this book highly

David McCullough is one of my favorite historians. He won two Pulitzer Prizes in 1993 and 2002 for his biographies of Truman and John Adams. The book starts out discussing the Northwest Ordinance of 1787, but the majority of the book follows a number of families who settle the North Bank of the Ohio River.

The book is well writing and researched. McCullough provides an excellent description of the Ohio River, forests and mountains of the west. The time frame of the book is from 1787 to about 1863. McCullough provides a great picture of the movement westward. I enjoyed the story of the coonskin library. This book would be a great summer family reading project.

The book is ten hours and twenty-three minutes. John Bedford Lloyd does a good job narrating the book. Lloyd is an actor and long-time audiobook narrator. He won an Earphone Award and the Audiofile Best of 2011 in Biography and Memoir Narrator.

Wow! McCullough can write about paint drying and make it interesting. He really dug up some fascinating people that conquered this land and how that area came to be.

Ancestors Were Some of These Pioneers

I greatly enjoyed the history of the the NW Territory and of Marietta, OH where some of my ancestors settled near to farm from 1796-1808. Of course my ancestors weren't specifically mentioned as they were ordinary people, but their land grants have Rufus Putnam and Cutler's names associated with the documents...very cool to hear about these men.

Part of the reason I think I didn't connect with this book as much as I had hoped was that when Mr. McCullough spoke about this in multiple interviews over the last few years he said it was going to be about the Northwest territory (Ohio, Indiana, Illinois, etc). It ended up being about a small settlement in Ohio called Murrieta and nearly the entire story takes place there or in it's surrounding areas. Very little about Indiana, my home state, or any of the other areas outside of Ohio are spoken about. Even this wouldn't be an issue if the story was as engaging as his usual content but I didn't find this to be that way. The pioneers certainly had a rough go in the beginning dealing with Native Americans and difficult terrain. The early days of the planning and the settlement were by far the most interesting in the book. For about 4 or 5 hours towards the end of the book, not too much was going on. If you're from Ohio or if you just love all of McCullough's work, this isn't a bad one to pick up but in my mind, it's the least of his works and I've read them all.

These pioneers were truly brave souls we don't normally know much about. loved it all.

i would prefer david reading it

this is an excellent story about the area where I

this is an excellent story about the area around where I grew up. The early days of the pioneers of Ohio. It's not covered in too many other books so it's well worth reading

Not a bad book, but I would not rush out to buy it. His best, IMO, was “Truman”. This is not like that.

It is mostly about the settlement of the area of Ohio around Marietta, told through the stories of a few people. You get a good picture of some of the hardships. These people worked all the time and the work was very hard.

Interesting subjects include the struggle to set up public schools and the fight to keep slavery out of the Northwest Territories (hard to think of Ohio as Northwest).

The slavery issue is featured prominently in many histories today, sometimes inserted awkwardly. In this case, it makes sense. The Ohio River was the border between slave and free. Imagine if slavery had been allowed to infiltrate into places like Ohio. It is likely that the Civil War would not have played out the way it did, or at all. Slavery might have persisted longer. Recall that Brazil did not ban slavery until 1888 and it persisted in much of world until well into the 20th Century. The African nation of Mauritania did not end it officially until 1981. How different world history would have been if the USA had not banned slavery when it did and given a few changes among a few people, because settlers were so few in Ohio in the early years, everything could have been different. History is contingent.

More a history of Ohio than the rest of the of the burgeoning Northwest Territory. Nary a mention of Indiana, Illinois, and Wisconsin.