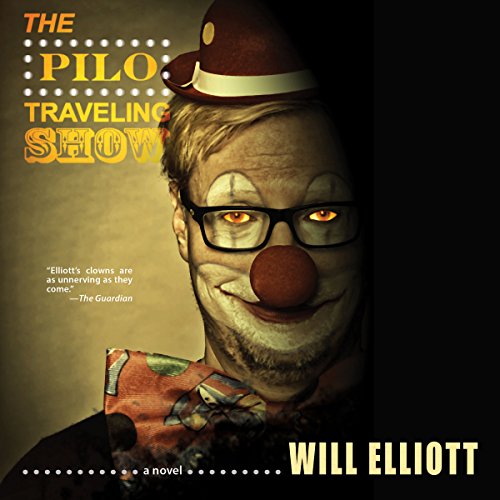 By: Will Elliott
Narrated by: P. J. Ochlan
Free with 30-day trial

Jamie is rebuilding his life after his previous escape from the Pilo Family Circus, with no memories of the circus besides the clown outfit in his cupboard. Far below, as the circus stirs back to life, Jamie finds himself filled with urges to be a clown again (making inappropriate jokes at work, an urge to put on his clown outfit, etc.). He also finds that his friends and family do not trust him because of that night he was found by police in a clown suit with blood on his shoes,and no memory of what happened.

But there are those who do remember what happened. As the circus rebuilds itself, seeking out past performers and enslaving new cast members, Jamie finds himself drawn back into the dark world of the diabolic big top. But this time the clown paint has no effect on him. His evil twin, J. J., is dead and buried. Jamie believes there is no way to bring back that twisted side of himself. That is until the body is found and reanimated.

What listeners say about The Pilo Traveling Show

Pales in comparison to the first.

I read these two books back to back, it almost felt as if they were the one story. But i was so disappointed in this sequel.
It just didn’t seem to capture what the first one had. The focus of this book was more about Gonko then Jamie and because of that I didn’t like it. The horror/Lovecraft-Ian aspect in this book I didn’t enjoy like the first one. in fact it made me a tad sick in regards to Goshie. The ending just felt cheap and just didn’t fit in my opinion.

The worst of it all was the Narration. This guy could not pick between a Australian, New Zealand or South African accent while trying to be Aussie. It annoyed me to no end considering in the first that is something i appreciated. The fact that there wasn’t even an attempt to capture the same characterisation the first narrator did i found disrespectful and not only that he changed the pronounce of one of the characters name. Really wasn’t happy about that.

Wish there was more

Just as thrilling as the first book, lots of cool interesting and characters riveting story. I really wish there was more books in this series.

a great series that I would highly recommend

great performance fantastic writing. this is the second book in the series the first is the pilo family circus if you don't listen or read them in order it won't make much sense. that said it's a fantastic listen that I would highly recommend.

I loved this book as much as the first one. I'm a bit sad because it ended and now I don't have a third book to look forward to.... or do iI??!! Although I was used to the narrator of the 1st book, P.J. Ochlan did a great job.