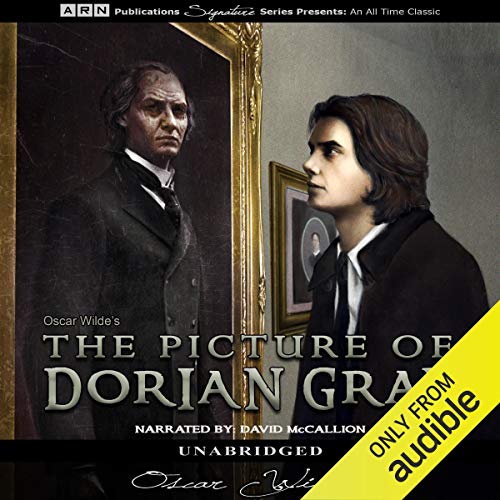 The Picture of Dorian Gray, written by Oscar Wilde, tells the story of a handsome young man who is befriended by a painter, Basil Hallward, and becomes the inspiration for his work. The young man is also introduced to one of Basil's friends, the hedonistic aristocrat Lord Henry Wotton, who enthralls Dorian by sharing with him his philosophies and ideals about life, including his belief that youth is the most precious and important thing in the world.

When Dorian is given a painting of himself by Basil he is suddenly struck by his own beauty and with the words of Lord Henry still fresh in his ears he wishes that the painting would be the one to grow old while he retained his youth. He falls in love with a young actress, but when her life is tragically cut short he decides to follow Lord Henry's advice and spends the next several years in pursuit of every sordid pleasure he can find, inspired by a book which was given to him by his older friend. But while he remains young, his portrait, now hidden away from the world, collects the scars of every sin he commits.

The book was written in 1891 and was the only novel written by Wilde, it was originally serialized in Lippincott's Monthly Magazine but was considered morally indecent by the editors who censored several parts without consulting the author.

The reader read beautifully with perfect pitch & pace. I most definitely recommend this narrator. This book is a florally-descriptive, sinister, classic. It belongs in your library.

Great addition to your collection...

One of the most intriguing stories of Oscar Wilde's, The Picture of Dorian Gray begins with a classic opening of innocence, one that we can all certainly relate to. A young man, Dorian, is the talk of London town; everyone wants to meet him, everyone wants to befriend him, and those that are fortunate to do so quickly become entranced by his seeming perfection. Even the painter Basil Hallward, who is commissioned to create lavish paintings of Dorian, becomes a close friend of the young man. Yet there is one dare I say negative attribute of Dorian's that is made extremely clear when he meets Lord Henry Wotton, a friend of Basil's. That his age and innocence makes him easy to influence, which is just what Lord Henry does.

Much to Basil's dismay - and mine, as well - Dorian experiences a slight fall from grace in which he is persuaded by Lord Henry to pursue a life of pleasure, failing to take into account the effect this new lifestyle might have on others. David McCallion's gentle reading of the text does well to properly convey all emotions and nuances of the characters, which is enough to keep the reader hanging by a loose thread until he pulls you in swiftly and completely. Bottom line this version of The Picture of Dorian Gray is a great addition to anyone's collection!

The Narriator does not do well on characters

I have seen many movies and stories that have Dorian Grey in them. This was the main reason I downloaded the book to hear the whole story of Dorian, but the voices didn't fit my expectation of the characters.

Hang on through the forced platitudes until chapter 6, when it gets interesting. Story progresses, but watch out for the long catalog of strange people who own strange bejeweled things.

What would have made The Picture of Dorian Gray better?

I commend DM for attempting to narrate such a brilliant and complex story. However, it falls short...way short of the mark. The producers should be ashamed for allowing this to go through. V.O. is an art...this is bad art.

the book was well-written and there were definitely laughable moments, but overall I didn't find it truly entertaining or beneficial. in fact there are times when I found the story annoying.

Something about this narration that just grates. Detracts from the great story and great lines from Oscar Wilde.