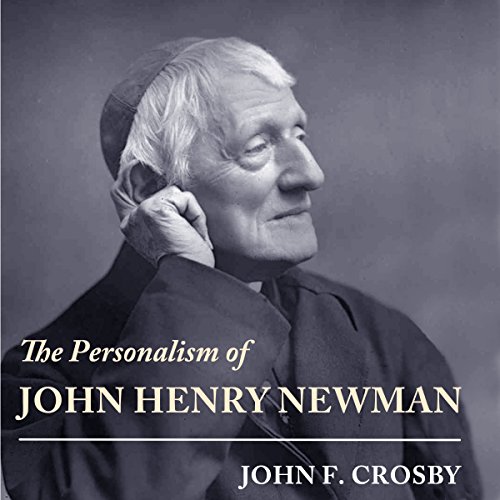 The Personalism of John Henry Newman

It has been said that John Henry Newman "stands at the threshold of the new age as a Christian Socrates, the pioneer of a new philosophy of the individual person and personal life." Newman's personalism is found in the way he contrasts the "theological intellect" and the "religious imagination."

Newman pleads for the latter when he famously says, in words that John F. Crosby takes as the motto of his book, "I am far from denying the real force of the arguments in proof of a God...but these do not warm me or enlighten me; they do not take away the winter of my desolation, or make the buds unfold and the leaves grow within me, and my moral being rejoice."

In The Personalism of John Henry Newman, Crosby tells the listener how Newman finds the life-giving religious knowledge that he seeks. He explores the "heart" in Newman and explains what Newman was saying when he chose as his cardinal's motto, cor ad cor loquitur (heart speaks to heart). He explains what Newman means in saying that religious truth is transmitted not by argument but by "personal influence."

What listeners say about The Personalism of John Henry Newman

Newman put his personal influence aside whenever he preached so that he can rely on the Holy Spirit to touch and move hearts toward conversion. That's the reason why he had a monotone way of delivering his sermons. Hence, his influence is still made upon Christians, in and through the example of his docility, meekness, and humility, in the presence of the Holy Spirit, who blows wherever He wills, and guides the Christian soul, in the ways of the Lord. Blessed John Henry Newman, pray for us!

Dr. Crosby does an incredible job at explaining the profound significance of the thought of St. John Henry Newman for our daily lives. A relationship with God is not merely some abstract matter, nor is it merely some simple good feeling. It is a personal communion with He who created us each individually, who sees us each individually, and who cares about each of us individually. Personalism as a school of thought in general balances between the errors of individualism, which we see in a hyper form in many Western societies, and collectivism, which reduces the person to a cog in the machine. It sees that man is an individual endowed with subjectivity but is always in community, in intersubjectivity with others. It recognizes that man is personally free and responsible, but is fulfilled in freely responding to value and to the Other as another I. Crosby shows how Newman, though not a professional philosopher by trade, is as shrewd in many of the matters of philosophy of the human person as contemporaries like his Protestant counterpart Kierkegaard and later phenomenologists and existentialists like Husserl, Scheler, Marcel, and others, many of whom were personalists. If you are a philosopher who is also a believer, this is the perfect book for you. Newman is a much more philosophically sophisticated thinker than most theologians, seeing things extremely lucidly and rigorously in terms that probe the depths and the crux of each matter. Newman is a thinker who bridges the gap between a dry abstract thought of Scholasticism and its mainly cerebral relation to God and modern existential thought which highlights the now undeniably obvious centrality of the heart. If God is love and in relationship with us, then certainly a lot more matters than our intellect in relation to him as some Christian relationship in general. He wants you to love him as only you can do. And the same goes for your calling in life and to others.

This is a fascinating insight into the thought of Cardinal Newman, revealing a vision of the human person that will change the way many contemporary challenges are viewed. I thoroughly recommend this to anyone seriously interested in understanding the core of what makes a person special and the basis on which God communicates with each person.