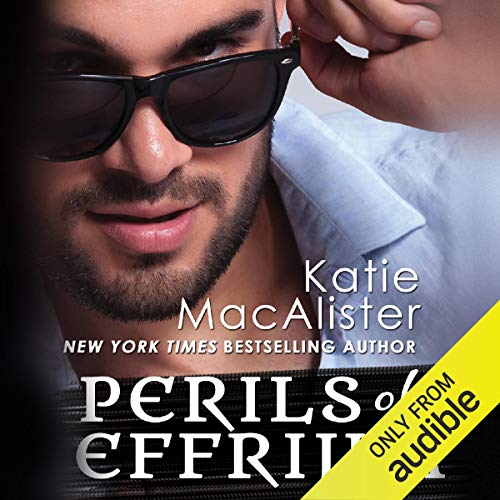 He's on the vacation from hell. She's on her honeymoon with a husband who isn't what he seems. They're both in the wacky world of New York Times best-selling author Katie MacAlister's paranormal Otherworld.

On his first day of vacation, Jim ended up naked, alone, and banished to limbo. Things went downhill from there.

In a wild ride through Finland with very non-Shakespearean Titania, double-dealing Oberon, and a plethora of militant nymphs bent on revenge, "The Perils of Effrijim" is loaded with quirky characters, a fast-paced story, and an adorable demon who just wants to be with his beloved.

In "Cat Got Your Tongue", Joy Randall thought her honeymoon with husband Raphael was going to fulfill all her expectations, but almost immediately they run into a decades-old curse, a spurned ghostly first wife, and a long-dead randy Scottish Laird. As if the odd inhabitants of their castle wasn't enough, Joy finds she isn't going to get the honeymoon she deserves until she settles an ancient feud...which uncovers some pretty shocking secrets about her new husband.

This collection of two short stories and assorted mini/short pieces were published previously, and gathered here for the first time. The Perils of Effrijim and Other Stories also includes excerpts of the two books that launched the characters in the stories: You Slay Me and A Girl's Guide to Vampires.

What listeners say about The Perils of Effrijim

If you could sum up The Perils of Effrijim in three words, what would they be?

What does Saskia Maarleveld and Scott Aiello bring to the story that you wouldn’t experience if you just read the book?

I absolutely love Scott Aiello as Jim. After listening and loving Barbara Rosenblat's impersonation of Jim, I thought I would have a hard time, but I didn't! He was Jim! I also enjoyed Saskia Maarleveid narration as well.

The first part of the book had me cracking up! The second story was entertaining as well.

I did not enjoy the Male narrator at all. I also thought the stories were sorely lacking in comparison.

Not sure how to feel

Well the story was okay, just a bit confusing to say the least. The narration was okay as well. I’m assuming this will play a part in the next book?

After the series I had high hopes for more of the same. Stories ok but not happy with narrators.

Jim is the always the best in Aisling Gray stories, however, this one is super short and hilarious. It leaves the reader wanting more of the demon newfie. The narration was okay but Barbara Rosenblat was fantastic in previous books, and wish she narrated this one. I also enjoyed the story "Cat Got Your Tongue," a novella from a Dark Ones story that indeed was fun to listen to concerning the honeymoon of Jill and Raphael. Katie, keep the stories coming.

So funny, much better than I expected.

I want to read the other books which are connected to these shorts as they are just hilarious. I'm hoping that they have the same narrators as their performances were brilliant (well with the exception of the weird jamaican accent, but the less said about it the better). highly reccomend this book, just wish it were longer. Now I'm off to get the backstories to each of these shorts.