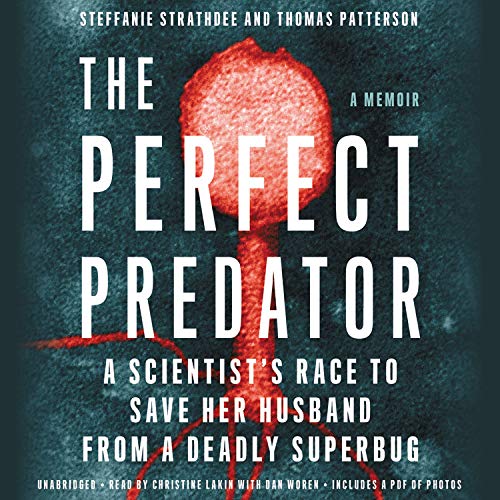 An electrifying memoir of one woman's extraordinary effort to save her husband's life - and the discovery of a forgotten cure that has the potential to save millions more.

"A memoir that reads like a thriller." (New York Times Book Review)

"A fascinating and terrifying peek into the devastating outcomes of antibiotic misuse - and what happens when standard health care falls short." (Scientific American)

Epidemiologist Steffanie Strathdee and her husband, psychologist Tom Patterson, were vacationing in Egypt when Tom came down with a stomach bug. What at first seemed like a case of food poisoning quickly turned critical, and by the time Tom had been transferred via emergency medevac to the world-class medical center at UC San Diego, where both he and Steffanie worked, blood work revealed why modern medicine was failing: Tom was fighting one of the most dangerous, antibiotic-resistant bacteria in the world.

Frantic, Steffanie combed through research old and new and came across phage therapy: the idea that the right virus, a.k.a. "the perfect predator", can kill even the most lethal bacteria. Phage treatment had fallen out of favor almost 100 years ago, after antibiotic use went mainstream. Now, with time running out, Steffanie appealed to phage researchers all over the world for help. She found allies at the FDA, researchers from Texas A&M, and a clandestine Navy biomedical center - and together they resurrected a forgotten cure.

A nail-biting medical mystery, The Perfect Predator is a story of love and survival against all odds, and the (re)discovery of a powerful new weapon in the global superbug crisis.

"...A memoir that reads like a thriller." (New York Times Book Review)

"A fascinating and terrifying peek into the devastating outcomes of antibiotic misuse - and what happens when standard health care falls short." (Scientific American)

"At once terrifying and inspiring, The Perfect Predator is a brilliant race-against-the-clock medical thriller that is also a celebration of love, commitment, and the power of scientific collaboration." (Steven Johnson, New York Times best-selling author of Where Good Ideas Come From and The Ghost Map)

What listeners say about The Perfect Predator

One of my new favorite books!

As a microbiologist, I loved this book. As a human, I loved this book. I’m telling you, I didn’t want to stop reading it (which is rare for me). You really feel like you are on the journey with Steffanie and Tom. Also, the actors for this audiobook were perfectly cast. I highly recommend you listen because you will learn a ton, laugh, cry, and feel inspired.

Bio-thriller! Brilliant, female voice excellent. Passion for science, devotion to her husband, and the race against time. true scientific cooperation saved him.

As medical professional, this book fascinated me and kept me on my toes. I appreciated the medical jargon and attention to details.

This story reads like a novel. I can’t believe I hadn’t run across it before because it’s right up my alley. One of the best books I’ve read this year!!!

Exciting fight against a superbug

I binge listened to this book over a couple days. it is a book you can't put down. As a bacteriologist I am well aware of antimicrobial resistance and its challenges. I see a lot of hurdles to make bacteriophage therapy available to everyone, but it holds a lot of promise and is a source of hope for those battling a superbug infection.
The narrators were phenomenal. The writing was simplified for the non scientist, but provided plenty of scientific information for them to understand the situation.

I really am invested in stories about infectious diseases, in part, because I worked in an Infectious Disease Bureau of a state Department of Health. The fact that the subjects and authors of this book worked in HIV/AIDS also mirrors my experience. This book tells the story of an infection with a multi-drug resistant bacteria. It begins in Egypt, continues in Germany and eventually ends up in San Diego. It chronicles the frantic attempts to clear the infected patient of his infection and the determination of his wife, the author of much of the book, who reads about treatment of multi-drug resistant bacteria with bacteriophages, viruses that attract specific bacteria and evolve quickly to combat the evolution of the bacteria’s defenses. Finding just the right bacteriophage isn’t easy, nor is it pleasant, (read to find out why), but the right cocktail of these super predators can bring someone back from death’s door. This is a book that should be listened to/ read by anyone who is concerned about drug resistance and the future that may be brighter thanks to phage therapy.

A must read, especially for those in the medical field. This is an amazing story of one woman who assembled a team of brave doctors and researchers to push forward the boundaries of science to fight a superbug and save her husband. This book is more than just her story, it details a momentous moment in history, where phage therapy is approved by the FDA in America. This is paving the way for phage therapy to become a viable addition to the arsenal in the war against antibiotic resistant bacteria.

Took me back to.college biology and microblology and my own scientific research The authors brought that interest and.coupled it with humanity too often forgotten when conducting experiments to find cures for diseases we are disconnect from. To listen to how long it takes to find the correct mixture them get it approved then wait more and more while your loved one may die then survive a successful experiment and look back on a way I never have. The impact we in the labs have on an actual person with loved ones and feelings even when comatose so impactful.
For anyone wanting to better understand the science of bacteria and viruses and their battle for survival while we humans use them or try to lil them, this is the book for you. It is the stoty of all living creatures and the will to survive that made this book less a scientific text and more about the fight to live at all levels of life. Wonderfully done! Good for you Tom and bless you Stephanie for fighting your own battles and going on to use your hardship to continue to search for more clues, more uses to help the survival of the human race.

One becomes sucked in and mesmerized by this story from start to finish. It is so engaging it seems more like a piece of fiction, but it is true. I found myself looking forward to getting back into my car so I could keep listening. In the meantime, the listener will learn a lot about microbiology, antibiotic resistance, the pitfalls of seeking medical care in third world countries and will be introduced to the exciting possibilities of phage therapy. I can't say enough about this book. If you have any interest in science and health at all, this story is fascinating.

As a clinical microbiologist and an instructor, this book hit every point on what we do in the laboratory (everyday unseen) and what we hope to teach others about the trends that pop up.

Thank you for sharing your personal experience

Thoroughly enjoyed this book, it's a gripping story from start to finish. While it doesn't fully dive into the scientific details of phage (which as a microbiologist I would enjoy), it does explain the medical parts in a very accessible way.

More a memoir than science

I found this to be more of a personal account than an analysis of phage therapy. The personal story was good, but if you're looking for theoretical stuff this will only tip the peak of the ice berg.

An absolute pleasure to listen to. A really riveting story that flowed with ease. Could not recommend enough.