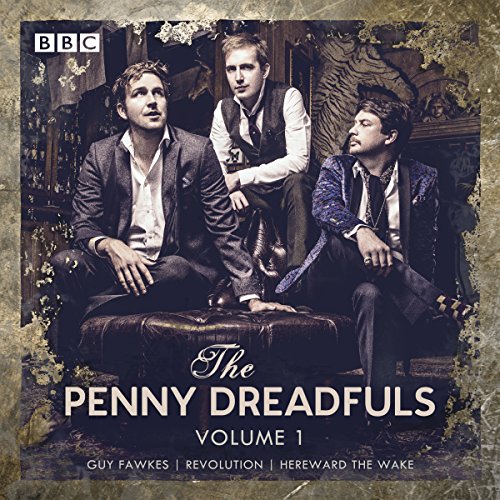 The Penny Dreadfuls examine the life of Guy Fawkes, undertake a satirical version of the French Revolution and turn their comic eye towards Hereward the Wake.

Guy Fawkes: What exactly are we supposed to remember on the 5th of November? The Penny Dreadfuls take a fresh look at the build-up to and aftermath of the Gunpowder Plot. Starring Kevin Eldon as Guy.

Revolution: The Penny Dreadfuls tell the epic story of the French Revolution – including the execution of the King and the slaughter of thousands at the guillotine - in just one hour, with jokes. Starring Richard E Grant as Robespierre and Sally Hawkins as Marie-Therese.

Hereward the Wake: Why has this Englishman, responsible for leading the fight against the occupation of William The Conqueror, been forgotten? The Penny Dreadfuls explain how the story didn't end when they ran out of embroidery cotton on the Bayeux Tapestry....

What listeners say about The Penny Dreadfuls: Volume 1

Behind the Scenes of History

So witty and clever the Penny Dreadfuls are here to let you in on historic conversations you wish you’d overheard. From Guy Fawkes’ zealotry, to Robespierre’s interrogation of the young princess Therese and a long forgotten medieval hero interposed with his champion’s tale of divorce and woe, this series is brilliant.

Excellent comic take on three historical stories, mixing great acting with good jokes and moments of tenderness. To be recommended.

This series really is funny. They are well produced and include a fantastic cast. The stories are the same well known tales that don’t veer too far from the from our understanding of them. And of course they are packed full of great humour.
Personally a preferred Volume 2 but Volume 1 is still excellent.

Cheap jokes + Torture = not for everyone

The premise of these stories is a good one, and the performances, production values and general sound quality is excellent. There were some genuinely touching moments, for example when Guy Fawkes remembers his childhood, or revels in a memory of his previous gunpowder triumph on the battlefield, many years before.
But I disliked this production for several reasons.
Firstly, there were just too many cheap jokes. It really seemed as if all the cheap gags were sprinkled on afterwards to make it an 'easier listen'. The rest of the writing was genuinely witty,cleverly crafted, sensitive and historically informative.
The heavy handed laughter track made the audience seem like a baying mob, who cackled and guffawed at the many and prolonged jokes about torture and violence while ignoring all the more intelligent, genuinely witty stuff.
OK, it's true that a lot of history's major figures came to a sticky end, so that was always going to be part of these stories. And I normally have a very dark sense of humour, so I didn't expect to have a problem with that. But there was something about the way that great chunks of this production revelled in torture, and the snorting and guffawing audience sounded like their blood was up, eager to be in at the death. It was weird, and left a strangely unpleasant aftertaste.

Very funny. Hereward the Wake is the pick of the bunch as is more a story than a collection of scenes. Wouldn't really say they are radio plays due to lack of plot but very funny and enjoyable all the same.