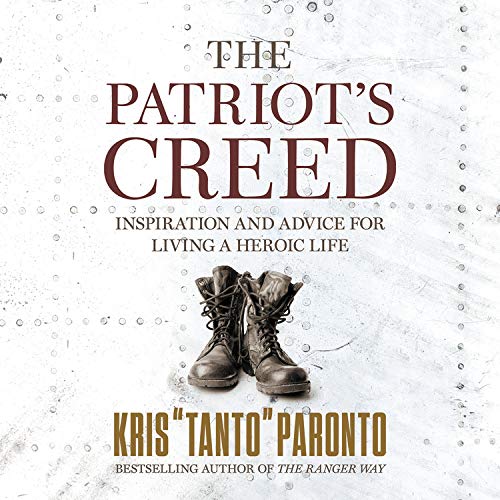 Army Ranger and best-selling author Kris Paronto reveals the values and creed shared by special forces for self-improvement and living a purposeful life.

When Kris Paronto began talking with civilians about his experiences fighting the terrorist attack on the US State Department Special Mission Compound in Benghazi, Libya on September 11, 2012, he was surprised at how often people told him that the story of his extraordinary battle gave them courage to face tough times in their everyday lives. "The odds were stacked against us that night but the truth is that we refused to quit and we beat them with faith, teamwork, and the principles that were first instilled in me when I joined the Army. You can find those in the Rangers Creed and the Army Values," he says, "and you don't have to be a Special Operations soldier to use them."

In The Patriot's Creed, Kris Paronto uses the seven core army values that all soldiers learn in basic combat training, and the experiences of other servicemen and women and first responders, to explain how anyone can improve themselves and the world around them, and live a heroic life. The stakes are dramatic for the brave men and women who put their lives on the line to fight for America, and too many of their acts of courage and honor are unknown. The examples of their persistence and discipline will be inspiring to anyone facing seemingly insurmountable obstacles.

At a time of national polarization, Kris Paronto draws attention to values all listeners can share and use, and to the honor, integrity, and courage of true patriots who have gone to great lengths to protect and serve. They embody the best of us and make Kris Paronto proud to be an American soldier.

"Kris Paronto epitomizes the courage, leadership, and discipline that selfless Americans who have fought for and defended freedom and liberty have exhibited from the founding of this nation to the present. Calling him my friend is gratifying." (David A. Clarke, Jr., sheriff of Milwaukee County, Wisconsin)

What listeners say about The Patriot's Creed

Do you enjoy learning about real-life, unsung heroes who have sacrificed dearly, sometimes all, for you and the freedoms you enjoy?

Are you inspired by heroic, sometimes super-human true stories about those who, when asked, would say they were just doing their jobs? (i. e. Heroes)

Do you have faith in your fellow man or faith in a higher power that can always use some encouragement?

Do you like to take advantage of learning from others' mistakes so you don't have to learn from your own?

If you answered yes to any of those questions, there is something inside this book read by the author, Kris "Tanto" Paronto, for you.

Get it and start listening today!

I own both copies of Paronto’s books The Ranger Way and The Patriot’s Creed. I highly encourage any SM or civilian to read or listen to these stories. They are not only for Rangers or Soldiers but for anyone who shares Love for their Country. I am not an avid reader but The perspective and view of related stories by Kris will leave you on the edge of your seat as you gain understanding of his journey. Please share with your Peers, Soldiers and friends as you never know who needs these words of wisdom. 🤙🏽