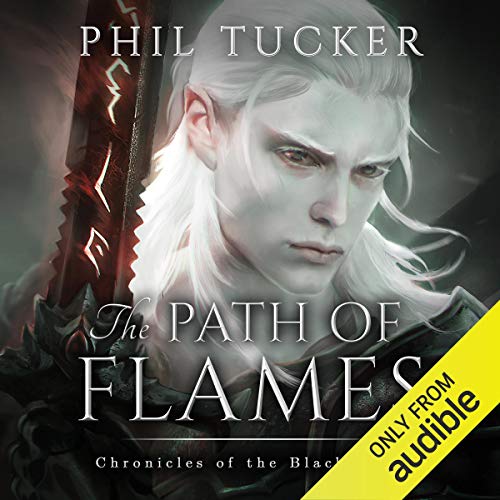 The Path of Flames

The Path of Flames

The first audiobook in the new epic fantasy series listeners are comparing to David Gemmell and Raymond E. Feist.

A war fueled by the dark powers of forbidden sorcery is about to engulf the Ascendant Empire. Agerastian heretics, armed with black fire and fueled by bitter hatred, seek to sever the ancient portals that unite the empire - and in so doing, destroy it.

Asho - a squire with a reviled past - sees his liege, the Lady Kyferin, and her meager forces banished to an infamous ruin. Beset by tragedy and betrayal, demons and an approaching army, the fate of the Kyferins hangs by the slenderest of threads. Asho realizes that their sole hope of survival may lie hidden within the depths of his scarred soul - a secret that could reverse their fortunes and reveal the truth behind the war that wracks their empire.

Unpredictable, fast paced, and packed with unforgettable characters, The Path of Flames is the first installment in a gripping new epic fantasy series.

This is a fun fantasy setting with some good tips well used. But a unique religion somewhat reminding me of Americanized Hinduism.
I found it enjoyable and will definitely be getting the next in the series.

The narrator, starts off a little dry, but he picks up a 'voice' or style about a third of the way through. Then he gets much better and I was drawn in.

Endurance is a virtue...

I tried. I mean, I really tried. See the rest of my reviews and you'll see I love fantasy. I love this book, having read the kindle...but the audio version...ugh. The narrator killed it for me. I'm not sure what he sounded like or what he reminded me of, but his voice does not fit the material. Truly bummed because I have looked forward to these books coming to audio for a while. Would loved to have heard a Michael Kramer (Mistborn/Wheel of Time/Circle of Reign), Nick Podhel (Name of the Wind/Castes and the outCastes), Scott Brick (The Passage/Terra Incognita), Oliver Wyman (Crucible of Souls), or a Keith Michaelson (The Lost Shards) type of narrator. I'm not a mean spirited person, I promise! I just have to encourage you to skip the audio on this one and read the actual book.

My biggest problem with this book is the narrator. Can't listen to the story. He might as well be reciting the encyclopedia.

I had never heard of this author, but tried his free prequel and was hooked. I bought the four available audible stories and was so impressed by The Path of Flames! I can't wait to start the next one. The narrator is good, but not outstanding.

The narrator did a great job with the story. And the story is very good. The only thing bad I can say is that some of the book was a little predictable. With that said, I would recommend the book to anyone, especially new listeners, the narrator really make the story easy to listen to.

The plot to the book is fine, but the whole thing feels like someone cut out all the interesting and important bits that make you emotionally engaged. If you need something to listen to while you are doing something less interesting like watching paint dry, this will do.

I read the whole series and yeah it’s about the same.

At the end of the day I would actually like to read it again if it was fleshed out a lot. The pot isn’t that bad I wanted to like it but it’s just not there.

First, concerning the narrator.
What can I say?
Noah Michael Levine is fantastic. Every voice was unique, his tempo was perfect, and his vocal range is impressive. My one and only qualm is about pronunciation. A few words were just a little off.

Phil Tucker has built quite a world here. It's an interesting mix of classic high fantasy, brutal medieval historical, and Grimdark, with a mythology that seems to combine some of the worst parts of Christianity with an interesting magic system to create something entirely new and unique.

My one qualm about the world is that the Craw are little more than thinly veiled orcs while the Bythians are only a slight modification on classic elves (with a strong Dragon Age feel).

Now, I have no problem with using classic fantasy races. I love fantasy that includes them. My complaint is that if you're going to go to the trouble of inventing a race, it should actually be new. If it's an orc, call it an orc.

Now, like a lot of epic fantasy, this book has a large, diverse cast and introduces those characters very quickly.

The saving grace is that each character is unique, with their own choice, quirks, and goals.

It might just be that I have an affinity for the 'other' but my favorite was definitely Farrick. For all that he does some REALLY stupid things, I love his story arc and his responses to things.

I'm still rather burned out on the absurdly overdone trope of the story revolving around politics and nobility, but one of the charms of this story is that it does it brilliantly and in a rather original way.

And finally, the ending.

When taking into account the relatively small scale of this story, I couldn't have asked for a more epic end. There are several escalating climaxes leading into the final battle that ties several threads together and opens up several new ones that seem to lead quite neatly into the next book.

I'm so glad I don't have to wait to continue on to the next book!

Breaks the Mold on Common Fantasy!

I don’t even know where to start with this book. It is truly the new gold standard by which I will compare fantasy books. I just could not put this book down. It got to the point where I was hoping for more driving at work, just so I could put it on and listen to it some more. I wanted more work to listen to this book! The only thing I have with the book, which isn’t even a bad thing, is the multiple points of view of the various characters. It took me a while to get used to, but I wish some of the characters showed up more, and some showed up less. I’m particularly fond of Tharok and Audsley, but they didn’t really get much time in the book. Maybe in the next one.

Phil Tucker really broke the mold on common fantasy. I truly enjoyed reading all the fantasy tropes, that were twisted into something unique and fresh. There is everything from 1 on 1 duels, to big army battles in this book, with magic weapons, spells, and artifacts that no one understands, but it’s the way these things are written that really made this book for me. So many different characters, all with their own voice, their own personality, and their own morals. Phil Tucker has a very strong chance of becoming my favorite author with this series and I’m dying to start the second book in this series.

Hats off to Noah Michael Levine, This man brought this book to life. His variety of voices, everything from smooth caramel, to rough gravel, to soft and dainty, truly shows his mastery over narration. As long as he is narrating the Chronicles of the Black Gate, I will absolutely go out of my way to listen to them. Honestly, I want Mr. Levine to read me a bedtime story at night. There wasn’t any stuttering or stumbles over any of the many odd names in this book, and the audio quality was spot on. Overall, it was just beautifully done, from the writing to the reading.

In conclusion, this book, to me, was a work of art. I highly intend to collect all of this series on a physical copy and share it with all my friends that it might bring them the same joy that it brought me.

Audiobook was provided for review by the author/narrator/publisher.
Please find this complete review and many others at my review blog.
[If this review helped, please press YES. Thanks!]

Loved the story and characters. Villains were easy to despise and hero's, well, they were heroic if uneasy with their status. The narrator is top tier and reads the story in a way that increased excitement. I hope you enjoy it.

Game of Thrones meets Lord of the Rings

Best performance of an audio book I've ever heard, and by only a single actor

Amazing start to a series

Really enjoyed the book, listened to it in a couple of days. Good character development and story so far. Story has really good ideas that flowed well. Kept on just wanting to listen. Excited to start the next one.
I slowed the narrator down slightly but was perfect after that slight tweek.

I struggled so hard with this. It had plenty of promise but I just didn't care for it.