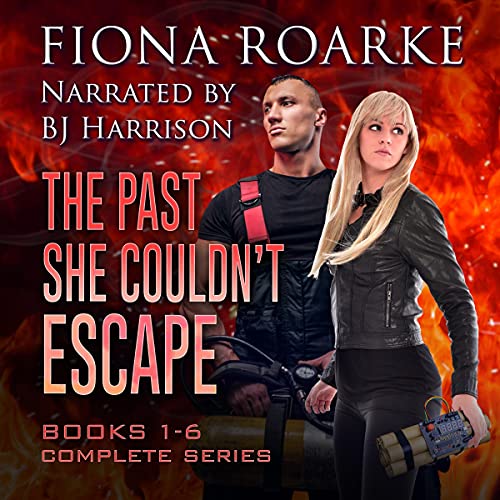 The Past She Couldn't Escape: Books 1-6 Complete Series

Sabrina Morgan has learned not to rely on anyone. Her reputation for being a strong-willed woman with no time for men and romance has been well-earned. So has her record as her squad’s lead bomb tech. She has never come up against a device she couldn’t diffuse. Until now.

Firefighter Jake Donovan can’t believe his luck when the notoriously unattainable Blonde Bomber runs into his arms. He’s not easy to scare off - after all, it’s his job to rush in where others fear to tread.

Sabrina knows better than to risk her wary heart. She should be paying attention to the psychotic bomber who is determined to make her play a very dangerous game. If she doesn’t figure out what makes the bomber tick, she’ll lose more than her life.

Sabrina’s professional reputation takes a hit when a crafty bomber foils her skills. Worse, a sexy firefighter she should have nothing to do with learns one of her most guarded secrets

As things heat up between Sabrina and Jake, she struggles to keep her focus on finding the bomber. The investigation turns up an unexpected connection to Sabrina’s past.

The Mad Bomber ups the stakes while Sabrina and her team delve into her past in their search for answers. Her professional life under threat, Sabrina finds it hard to resist a very determined Jake.

Facing threats on a number of fronts, Sabrina’s determination to keep her heart from Jake weakens. Guilt over her biggest secret plagues Sabrina as the Mad Bomber’s vendetta rages.

Evidence gathered from a twenty-three-year-old crime scene give Sabrina and her team new leads that bring them closer to the Mad Bomber, whose motivations continue to be a mystery.

Sabrina struggles to cope with a shocking revelation in her personal life while the Mad Bomber closes in, determined to end their game with a blast.

What listeners say about The Past She Couldn't Escape: Books 1-6 Complete Series

I couldn’t stop reading. Good romance and characters are strong and yet romantic. Jake was all man, but he also showed a soft and loving side. All of the characters are interesting. This is definitely a great romance with a mystery twist. I’m so glad I purchased. I plan to read more from this author. The performer was excellent!