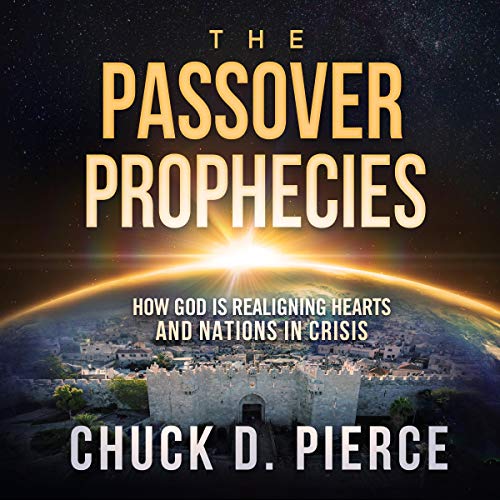 How God Is Realigning Hearts and Nations in Crisis
By: Chuck Pierce
Narrated by: Tim Lundeen
Length: 4 hrs and 15 mins
Categories: Religion & Spirituality, Christianity
5.0 out of 5 stars 5.0 (1 rating)

God is realigning hearts and nations in crisis.

This audiobook will allow you to hear what the Spirit is saying to the churches in this season of a modern-day Passover. A timely prophetic message on how to discern the times and know what to do as the body of Christ. As people and nations emerge in the aftermath of this pandemic, God will realign hearts and nations in preparation for an end-time harvest.

Brief summary: One of America’s most-respected prophetic voices brings a critical message to a nation - and world - at a crossroads. In September 2019, God revealed to Chuck Pierce that between February and April 2020, plague-like conditions would hit the earth. The Lord said, “I will be waiting to see which nations ‘pass over.’” Just like the very first Passover, God is looking for a remnant that will hold strong and bring his love to a hurting planet. Pierce divides the rumors from the word and answers such questions as:

In the midst of pandemic, God is also assuring his church that after this period, for those who hold fast to Jesus, there will be a time of celebration. In The Passover Prophecies, Pierce delves into the ancient biblical signs that point toward a glorious future for the people of God. Move forward, feed your faith, and know that even in the midst of uncertainty, his kingdom shall overcome, and his will shall be done on Earth as it is in heaven.

What listeners say about The Passover Prophecies

Nice narration of prophetic revelations from Chuck Pierce. Since I keep up with his current prophecies and celebrations, some of it was a repeat.

Takes a peek into the future.

I am so glad I read this book because it helped me to understand reasons for things that are happening now globally and what we can expect for the future.

Eye opening truth based on scriptures.

Easy to understand the prophetic revelations. Chuck explains future events for the Church and how to prepare for things to come.

Very well done and specific. Well written and narrated. Must have book. Really easy to understand.

This is a must read for the times we are living in. Thank you Pasror Chuck.