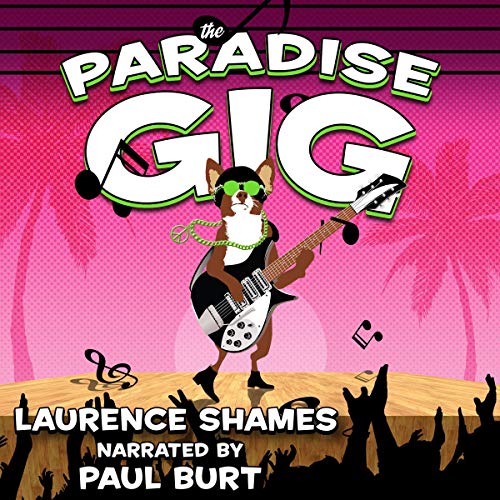 Fact: In September 1964, the Beatles, their private flight diverted by Hurricane Dora, made an unplanned visit to Key West.

Fiction: Poolside at their motel, the Fab Four fell into conversation with a snappy-dressing local named Bert the Shirt, who listened as the band worked out a harmony to the most beautiful song he’d ever heard...and wouldn’t hear again for over half a century.

Fact: That night, the Beatles played an unannounced free concert in the motel bar. Everyone was welcome. Local musicians showed up with guitars and keyboards, and had the once-in-a-lifetime experience of jamming with the Beatles till 4 am. This legendary event has forever after been known to Key West locals as The Paradise Gig.

Fiction: Next day, hung over and exhausted, the Beatles left for the airport, having somehow lost a stained and battered notebook that held a priceless stash of unrecorded songs.

Now cut to the present: A beautiful woman is doing a yoga headstand on a Key West beach when she’s abducted by a pair of thugs. An aspiring young singer is offered a recording deal that seems a bit too good to be true. Bad things happen to a couple of one-hit wonders. And old Bert hears a new song that is hauntingly familiar, but that he can’t quite place.

Could it possibly be the same song he’d heard at poolside so many years before? Could it be that all the present mayhem circles back through the decades to The Paradise Gig? Could the precious, even sacred, Beatles notebook possibly turn up after all these years? Could Bert be the hero who would rediscover that stash of unheard songs for music lovers everywhere - and save a young singer’s life in the process?

With Nacho, his intrepid Chihuahua, at his side, and with no one but bumbling detective Pete Amsterdam for an ally, the undaunted Bert the Shirt sets out through the Florida haze to piece it all together, learning along the way how much the world has changed - and how much it has not.

In equal parts suspenseful and nostalgic, funny and romantic, this time-bending caper celebrates the power of music and the many tricks of memory, the joys of youth, the comforts of age, and the free and funky spirit of Key West.

What listeners say about The Paradise Gig

A great story idea built around the Beatles inadvertent Key West stop in 1964. The change of narrator from the previous KW series narrator worked out ok as the story went along. But it’s about the story, and as usual the story was fun, well crafted, and as easy to get into as a pair of Key West flip-flops! All of the KW characters we know and love are again knee deep in a mystery with Bert the Shirt and Nacho taking charge. I’ve read all of the KW books so I guess I’m biased. This is family now. Can’t wait for the next!

So cute... can you say cute about a mystery?

I really loved this. Maybe because I have a chihuahua that I do put clothes on. The story was really great. Laurence does a great job describing things. Some go overboard but I loved how he writes. I would love to read more with this group of characters.
Paul Burt did an amazing excellent job narrating as always. Such a great voice!
I was given this free review copy audiobook at my request and have voluntarily left this review

I've listened to every Key West Caper starting with Book 1. The stories are consistently funny and a welcome distraction from the seriousness taking place in our real world. The Paradise Gig is the same high-quality storytelling as the rest of the books in the series. Reading about Bert and Nacho is like visiting with old friends. I hope they live on for many more installments. I was apprehensive about the new narrator because Jem Matzan has been excellent in previous books, but Paul Burt came through with flying colors. His voices were unique and we even got to hear him sing!

I had a lot of fun listening to this book. It was full of colorful characters (my favorite being Bert), and the story was so entertaining that I kept wanting more. I also appreciated the many random observations of how people are and how the world works that are interspersed throughout the story; they often had me laughing. The narrator did a great job of animating and decorating these wildly flamboyant characters through the use of a surprisingly wide range of distinct and lively voices. Plus, we even get to hear him sing!

Love this series and with a great narrator!

Loved the first book Florida Straights and was excited to see that it was a series. Paradise Gig has the same great combination of fun, intrigue, and laid back style that pulls you in. The narrator added a lot of character and substance which was a welcome surprise as I had read the earlier books in hardback form versus audio.

The plot is exciting without being too outlandish, and overall a great summer (or anytime) book.

Not nearly as good as prior; terrible narration

Laurence Shames is one of my favorite authors. His "Virgin Heat" and "One Big Joke" are true masterpieces, interesting, exciting, and often laugh-out-loud hilarious. So I was disappointed when I read Paradise Gig. The story is pretty good, actually very good when compared to many other authors novels. But it's just not nearly as good as his prior works, all of which I have read, some of them several times. The real problem for me, though, is the narrator. I think Jem Matzan is the perfect narrator for this series. His take on Bert the Shirt is incredible, so wonderful that I often laugh just listening to him talk, no matter what he is saying. In sharp contrast, Paul Burt, who narrated this book, completely misses the mark. His Bert is awful, and the way he does the female character Calli is so bad that it hurts to listen. It's tragic that bad narration can spoil an otherwise decent novel.

Madcap and thrills - what more can you want!

Laurence Shames , Dave Barry and Carl Hiaasen, are the go too guys for madcap Florida adventures. I have been listening to Laurence Shames work since the early nineties, his books are really great, as I said madcap and thrills.. perfect reading, I do like his new narrator very much Paul Burt understands the book and more importantly the readers, he is a really good choice in making this book come alive, I won't spoil the plot too much , but thankfully it involves all the fave characters Bert of course.. I received this copy gratis, and am delighted to give this review