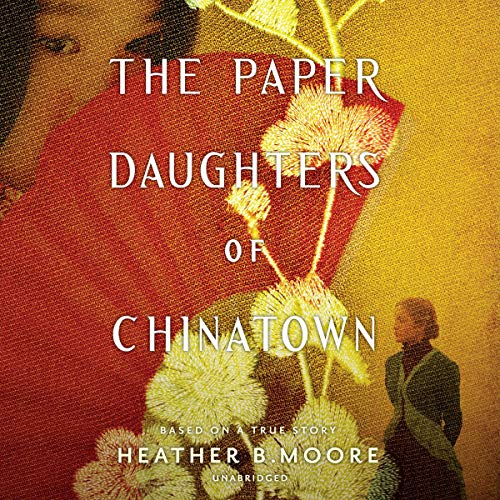 The Paper Daughters of Chinatown

By: Heather B. Moore
Narrated by: Nancy Wu

A powerful story based on true events surrounding Donaldina Cameron and other brave women who fought to help Chinese-American women escape discrimination and slavery in the late 19th century in California.

When Donaldina Cameron arrives at the Occidental Mission Home for Girls in 1895, she intends to teach sewing skills to young Chinese women immigrants, but, within days, she discovers that the job is much more complicated than perfect stitches and even hems. San Francisco has a dark side, one where a powerful underground organization - the criminal tong - brings Chinese young women to America to sell them as slaves. With the help of Chinese interpreters and the Chinatown police squad, Donaldina becomes a tireless social reformer to stop the abominable slave and prostitution trade.

Mei Lien believes she is sailing to the "Gold Mountain" in America to become the wife of a rich Chinese man. Instead she finds herself sold into prostitution - beaten, starved, and forced into an opium addiction. It is only after a narrow escape that she hears of the mission home and dares to think there might be hope for a new life.

What listeners say about The Paper Daughters of Chinatown

While this is a fascinating story, well researched and historically significant, the writing was somewhat overwrought. It seemed, at times, too melodramatic. I still enjoyed it, and learned much about this interesting woman, but stylistically was not as crisp as I would have liked.

great story based on true events

I was captivated by this story. plenty of intrigue, suspense, and hope. I recommend it.

The Paper Daughters - unforgettable story of perseverance and resilience!

Of course I had an idea about what the paper daughters would be about. However, the way Heather Moore developed these characters into living, breathing, human beings, both the Chinese girls and Dolly, has made them unforgettable in my mind. Throughout the book, I often stopped and Googled images of the Cameron house, San Francisco’s Chinatown, and Donaldina Cameron. What is so sobering is that the story, this war, it’s still being fought on other fronts. We have Tim Ballard, but we need more people with courage like he and Dolly. The story definitely moves you to do something.

Historical Fiction at it's Best!

What a wonderful book! Heather has truly educated me on a life and rescue of human trafficking. Heather has opened my eyes to a world that isn't pretty but is still occurring. She combines true people and events with fictional people so that the story can be told. She does so a way that although at times is heartbreaking is also uplifting.

This book is an excellent account of San Francisco slave market in the early 1900s and the women who were heroes. I loved the story of May Lin that brought everything to reality. Donaldina Cameron true American hero

Should be classified as a “Youth Fiction” book

Disappointed. The story is written as though done by a teenager. The narrator speaks as if she is reading to very small children. It was hard to keep listening to this book, but I finished it. Perhaps a young teen audience would be more appropriate for this book.

A beautifully wriiten historicql fiction showing that all lives should matter, no matter what race.

While the subjects of prostitution, abuse, and human trafficking are horrific, Moore does an excellent job of not being too graphic. Throughout her novel, Moore spotlights the life of Donaldina Cameron, an unstoppable champion of human rights. The narrator uses multiple accents to bring to life these characters. This book touched me and caused me to look for ways to advocate for victims in my own area, to follow the example of Donaldina Cameron.

Inspiring Story about an incredible woman!!

I could not put this book down! It was tastefully done and quite captivating. I would recommend it to anyone.

Excellent writing, story is grim and not light reading. The truth of it is staggering.